The Yves Klein exhibition currently at the Centre for Fine Arts in Brussels suffered mishaps when a museum visitor stepped over a barrier into a pigment installation and tracked blue footprints around the gallery.

A museum spokeswoman said: ‘He was so obsessed by a video which was playing on the wall, that he did not see where he had put his feet down.’ Daems said: ‘He stepped into a big sandbox of which the grains of sand were coloured blue. The artwork was nevertheless ‘notified’ with a warning sign and is partly enclosed, but he ostensibly did not notice it.’

Klein, the leading member of the French artistic movement of Nouveau realisme is known for his bright blue monochrome artworks. The artwork, entitled Dry Blue Pigment, dates from 1957 and has previously been on display at the Tate Liverpool. Each time it is installed it has to be built up from scratch when the exhibition moves to a different place. According to the museum, it was, therefore ‘no big effort to restore the sand’. 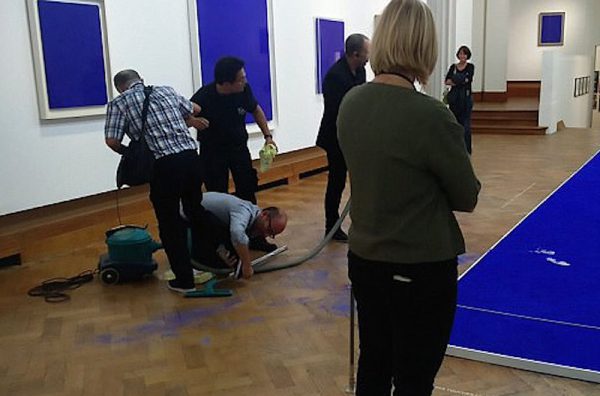 Klein’s vision was to express absolute immateriality and infinite space through pure colour.  The exhibition examines this through works from across Klein’s major series including paintings deploying his signature dazzling pure-pigment International Klein Blue (IKB), a distinctive ultramarine able to invoke a powerfully depthless sense of space on the surface of the work. Also displayed will be his Anthropometry paintings created by the artist choreographing nude models as living paintbrushes to transfer blue pigment onto canvas and his pyrotechnic Fire Paintings, created using a flame thrower. It further presents his sponge sculptures, planetary-reliefs and pure colour monochrome paintings.
Embracing painting, sculpture, performance, theatre, music, film and architecture, Klein pioneered new attitudes that took the European art world by storm before his untimely death at the age of 34 from a heart attack. At the age of 19, the artist symbolically signed the depthless blue sky using his finger, declaring it as his first artwork. This moment underpinned Klein’s interest in the relationship between infinite space and art that foreshadowed his short but startling career as one of the most original artistic thinkers.