Zombie Boy an iconic body artist and model, tattooed as a living skeleton, has been found dead in Montreal. He worked in various sideshows and freak shows across Canada as an illustrated man, not long after beginning his facial tattoos. Genest was introduced to the public on November 13, 2006 and in March 2008 his first interview, by which time his iconic tattoos were largely completed helping to make Zombie Boy a viral internet phenomenon. He holds a Guinness World Record for most insect tattoos (176) and another for most human bone tattoos (139).

“After a period of illness, Rick Genest began to have the inside of his body drawn onto his skin by a tattoo artist.”

Zombie Boy clarified that he preferred the moniker “Zombie” to “Skullboy”. He had been referred to in the past as Skull Boy or Skeleton Boy… His exposure led to increasingly mainstream media coverage. He worked with Lady Gaga and was discovered by YBA artist Marc Quinn, in Bromont, Quebec, where he was working with the sideshow, Alive on the Inside, at Carnivàle Lune Bleue during the Summer of 2010. On March 5, 2010, a Facebook fan page was created about Zombie Boy’s unusual choice of tattoos. This page reached 1,526,292 members (as of November 19, 2011) and ultimately led to his “discovery” by Lady Gaga’s fashion director Nicola Formichetti. 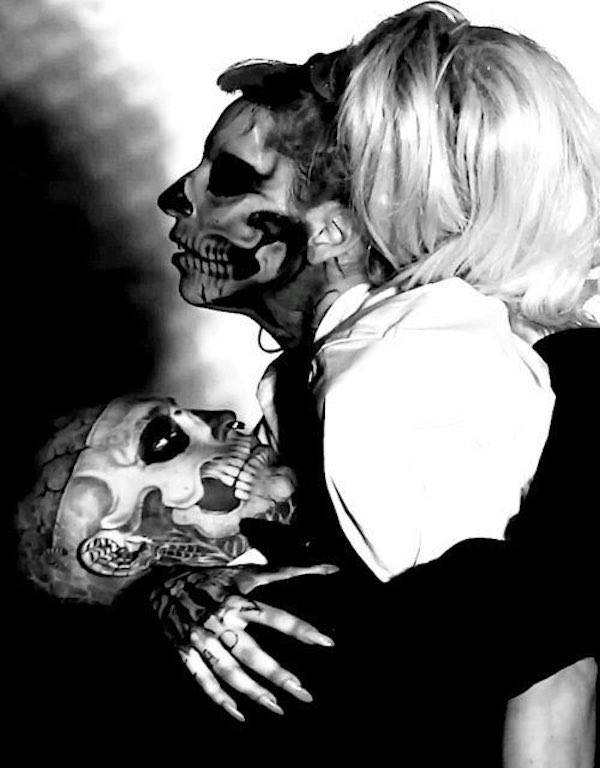 Gaga stated on Twitter, “The suicide of friend Rick Genest, Zombie Boy is beyond devastating. We have to work harder to change the culture, bring Mental Health to the forefront and erase the stigma that we can’t talk about it. If you are suffering, call a friend or family today. We must save each other.”

London’s Science Museum recently commissioned the YBA artist Marc Quinn to create a monumental sculpture for the new Medicine Galleries. Self-Conscious Gene is a sculpture of the late Canadian born Rick Genest, more widely known as Zombie Boy, who began covering his whole body with tattoos of his complete skeleton following a period of illness. The 3.5 metre sculpture will welcome visitors to the GSK and Vitabiotics Vitamins funded galleries with a landmark £24 million project that will create a magnificent new home for the Museum’s world-renowned medical collection.

The sculpture will be unveiled in autumn 2019; Self-Conscious Gene will greet visitors as they enter the Galleries, introducing the theme of ‘Medicine and Bodies’ that this space will explore.

The work has evolved from Marc Quinn’s ongoing series entitled body alterations, which explores how, using modern medicine and technology, people have modified their outer bodies to reflect the identity they wish to project – bringing the inside out.

Marc Quinn is one of the leading artists of his generation. His sculptures, paintings and drawings explore the relationships between art and science; Man and nature; and the human body and the perception of beauty. Quinn came to prominence in 1991 with his sculpture Self (1991): a cast of the artist’s head made from eight pints of his frozen blood. Other critically acclaimed works include Alison Lapper Pregnant (2005), exhibited on the fourth plinth at London’s Trafalgar Square; Siren (2008) a solid gold sculpture of the model Kate Moss displayed at The British Museum, London; Breath (2012), a colossal replica of Alison Lapper Pregnant commissioned for the 2012 Paralympics opening ceremony and Planet (2008), a monumental rendition of the artist’s son as a baby, permanently installed at The Gardens by The Bay Singapore.