The first significant survey of the influential 80s design movement Memphis takes place at MK Gallery in Milton Keynes this December-April. The exhibition, Memphis: Plastic Field explores the provocative and irreverent spirit of the Memphis Group, bringing together over 150 of the collective’s most significant works whose bold and playful aesthetic pushed boundaries and sparked a new era in international design.

Founded by Italian designer and architect Ettore Sottsass, Memphis brought together an international collective of young designers united in their desire to inject humour into the design world and shatter the codes of the 20th century. When the group debuted its first collection at Milan’s Salone del Mobile in 1981, it caused a sensation, breaking the rules of streamlined modernism and challenging notions of functionality and good taste. 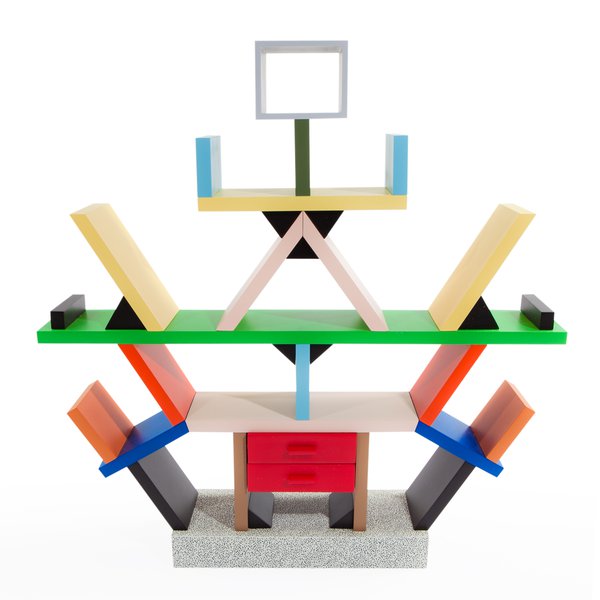 Their furniture was colourful, kitsch and geometric, drawing on Pop Art, Bauhaus and Art Deco to create an entirely new aesthetic full of punch and vitality. The sensory quality of the object was prioritised over function. Materials like plastic laminate and Terrazzo, previously used in kitchens and bathrooms, were suddenly incorporated into high-end furniture, and monochrome patterns of graphic shapes and squiggly lines paired with vivid yellow became an instant Memphis trademark. The exhibition at MK Gallery features iconic designs created by the Memphis Group between 1981 – 1988, including work by important contributors such as Shiro Kuramata, Michele De Lucchi, Nathalie Du Pasquier, Martine Bedin, George Sowden, Michael Graves, Javier Mariscal, Marco Zanini, Aldo Cibic and Peter Shire.

Their designs experienced limited commercial success and were derided by critics of the time for being impractical and expensive. Only a few devoted high-profile customers were able to buy designs in bulk, including David Bowie and Karl Lagerfeld, who furnished his Monte Carlo apartment with Sottsass’ first collection. The movement was short-lived, but its influence reached far beyond its active years to have a lasting cultural impact on fashion, art and design.
Memphis: Plastic Field celebrates the importance of the Memphis Group as a revolutionary moment in the history of design. In its rejection of the austerity of modernism, Memphis became a significant part of pop culture, becoming synonymous with both the boundary-pushing postmodernism and garish appeal of the 1980s. Its signature clash of bright colours and synthetic materials pervaded every aspect of 80s popular culture, from the unmistakable aesthetic of TV shows like Saved by the Bell and Miami Vice to MTV graphics.