200 WOMEN who will change the way you see the world

200 WOMEN who will change the way you see the world is fittingly showcased at Pen and Brush, New York, an organisation which began in 1893 by maverick activist Janet C. Lewis – a painter who invited female creatives to become part of a new and exclusive consortium set up to support and inspire women in artists and writers.

A bold mission created by Geoff Blackwell and Ruby Hobday with photographer Kieran E. Scott, 200 WOMEN presents female figures in open discourse across the world, regardless of nationality or professional, social and financial standing. Photography can be manipulated a thousand ways and yet it can seize the truth in one moment. This visual documentation reveals the face of known and unknown figures thus capturing the spirit of womankind in their honest experience and endless fortitude. 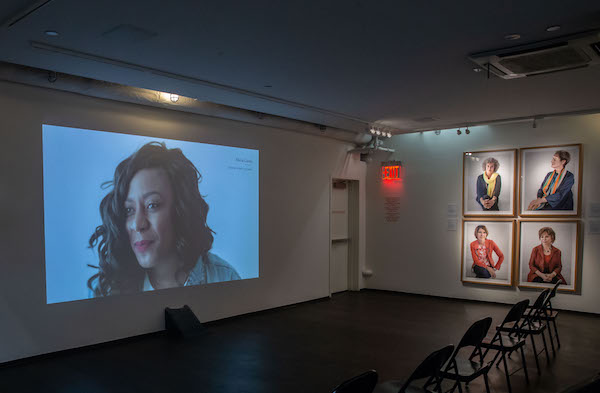 Each compelling portrait is set against a simple white backdrop; each unique countenance says everything that needs to be said. Every individual who has been included has been interviewed and recorded, giving resolute answers in response to five deliberate questions: “What really matters to you? What brings you happiness? What do you regard as the lowest depth of misery? What would you change if you could? Which single word do you most identify with?”

Female archetypes of every kind fill the well-designed open space of Pen and Brush, from the great writer Margaret Atwood – with notable books including the re-energised Handmaid’s Tale – to courageous Ruth Bader Ginsburg whose fame as an icon on the supreme court is referenced through a composed and confident stance of righteous justice. Meanwhile, Winnie Madikizela-Mandela’s portrait dazzles among the many lives who are chronicled in this pictorial survey.  As a political activist in South Africa with her husband in jail and often being banished from her home, her rights as a parent were conceded because she is a woman. In a male dominated society this often meant her children’s lives were at the mercy of strangers and the courts. “It is a serious problem that women must prove that they are equal. How odd is that? Men would not be in this world without us?”