Nearly a year to the day after ‘Defining Structure’, artist and curator Alexander Hinks returns to The Cello Factory.  Amalgamation, the title he has chosen for this exhibition, suggests pluralism rather than purity, symbiotic relationships over synthesis, a mutual benefit beyond sharing common points of departure or goals.

Most of the artists included in this exhibition are involved, quite literally, in expanding the physical frame of painting by way of installation, wall painting or virtual reality. What could at first seem to exist in the realm of pure painting or process-based production is, as we soon see, complicated by reference to digital mediation.

For some years Hinks’s own practice has suggested two possible directions running concurrently. On the one hand, the implication of an expanding space ordered by grids which sit upon the ground of his paintings in a way that suggests an illusionistic ceiling or platform. On the other hand, a secondary force comes to the fore: a dissolution or flux, both liquid and vaporous. These twin impetuses seem to imply a continual play between construction and destruction, where the desire to order and create must admit to the power of chaos.

In his iteration for this exhibition, signature checkerboards leave the surface of the canvas to expand across the gallery walls. By implication, we could be engulfed by an ensuing call to order or else dissolve. Perhaps it is the tension between these seemingly polar forces that indicates the undesirability and untenability of either path to the exclusion of the other.

Anna Reading’s works seem to form a whole as if some vast organism has left a cast in the galleries: a rough improvised mixture of shells, card packaging, grit and foam. The objects carry the sense of an ever-unravelling force: elements accumulate in a creatural, systematic way. Even when approaching the monumental in scale, these sculptural aggregates seem to suggest their own vulnerability and inevitable collapse.

The materials Anna uses often reference the sea and akin to much work in this exhibition we are reminded of our current ecological fragility. As much as we accumulate knowledge and wisdom as a species, nonetheless plastic accumulates in the oceans due to our actions.

It is not surprising that Reading’s work embraces performance along with a powerful use of the written and spoken word.

John Bunker’s work seems to trawl the corners of the studio and urban backstreets for material and inspiration. He assembles discarded torn and dirtied scraps into elegant and allusive collages. Delicate incidental gesture plays off the day-glo world of hazard warning signage to make an anarchistic whole stretching to break the frame.

Dan Coombs presents oil paintings drawn from diverse, obscure sources. Landscapes conjure memories of suburbia, skinny-dipping, ‘Déjeuner sur l’herbe’. All of this slashed and erased with a pallet knife or muddled in pooling paint. The blurring inconsistency of memory stands analogous to the act of painting.

Anna Lytridou seems more centrally concerned with the issue of the frame and its intersection with image. Her work has veered from an insistent articulation of the rectangle in three-dimensional space to the most subtle of manifestations. Fragments of hand-coloured gossamer fabric drift through meandering lines. All this is suggestive of the difficulties innate in occupying any fixed point of view. Lytridou wilfully bends, breaks and dissolves perspective as hard and soft materials defy each other. 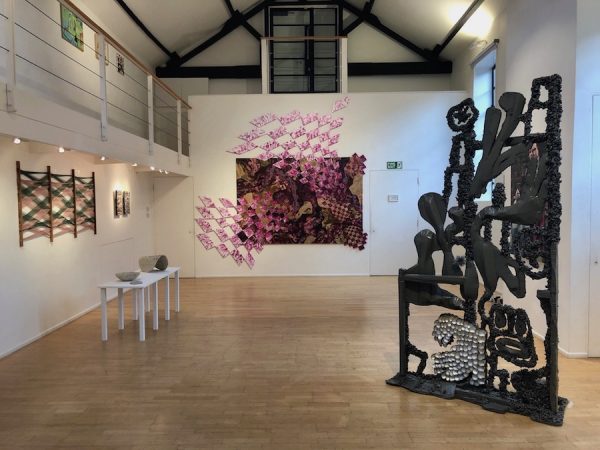 Will Cruickshank’s work presents a delicious mix of absurdity and sensuality. He describes his process as the meeting of man, machine and material. High modernism has been returned to some of its roots in homespun craft and tribal patternmaking. There is a good deal of wit in Cruickshank’s amalgam of materials and influence, Futurism by way of spirograph, from boardroom charts to Zulu shields. A number of works stem from the fortuitous meeting of balls of wool with a cement mixer on the drafting table.

Wendy Anderson’s panel paintings highlight the assimilation of the handmade and the mediated. They are quite different when viewed from near or far. At first sight, they seem like aboriginal artefacts where signs are stacked and repeated. On closer inspection, one sees fragmented magazine images collaged into the surface. The careful stabs of brushed paint which run out and over the frame are somehow akin to the action of the scissors defining the forms of the cutouts.

Alison Goodyear’s presentations also foreground the performative. Delicate washes of subtle or forceful colour overlap on the ground. Once again, as in many works, there is a suggestion that the frame extends beyond as the rectangles she presents seem fragmentary. For ‘The Cello Factory’ we are invited to scrutinise the surfaces of paintings with ultraviolet torches to discover marks hidden on the surface. The transience of the mark is highlighted as digitally manipulated images of paintings are projected across colourful fluttering silk draped over a stretcher frame sitting on a studio easel. 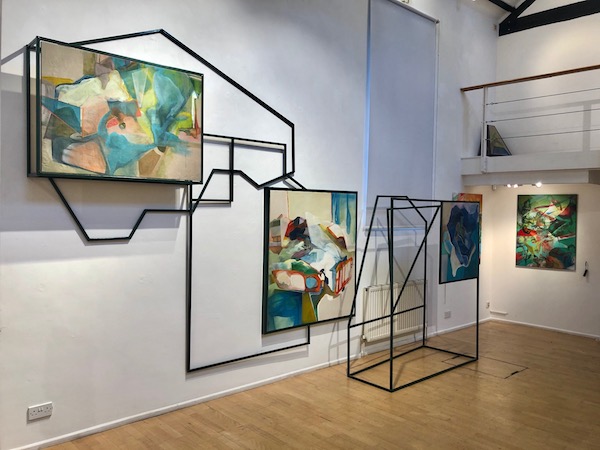 Robert Dunt creates busy, eye-popping paintings employing a bright synthetic palette. This is painting as amalgamation, where marks sit together rather than belong together, layered not combined. They seem a vision of impurity and distortion referencing the buzz and hum of screens.

The meticulously finished sculptural assemblage of Thomas J Ridley presents us with a precarious pedestal of nursery toys, where three goddesses part-human, part-animal perch atop a triplane. Is this fantastical amalgam a personal mythology?

Tom Hemming addresses the encounter between sitter and artist in his oil paintings. The paintings seem to inhabit a kind of proto-cubist language. Perception is seen as dissolution and painting a race to catch-up, record and give an authentic account of lived experience. Hemming’s often highly coloured palette, yet tending to monochrome, serves to act as a filter to remind us of the artifice involved.

In Gary Colclough’s wall-based constructions nature appears again only this time solely as artifice. What would potentially be romantic images of forests or fields become alienated, coolly drawn and painted in lurid colours that feel like copies of copies. These paintings are set against constructive angular planes, the only natural element the grain of the carefully sanded polished wooden bars which criss-cross the panels. The natural world is almost completely transformed into cultural product.

Nature would seem to be in the ascendant in Juliette Losq’s hybrid paintings, prints, drawings and installations. Reflections, fact, fantasy, day, night, past and future overlap in Losq’s landscapes which blur the boundaries of the imaginary and the documentary. They are portrayals of a world devoid of all but the traces of human presence. They usually lack centrality, are viewed from the periphery with edges fading and obscured by either darkness or light. The landscapes seem to be in the process of being reclaimed or overrun by nature: dimly lit overgrown pools dissolving broken stairs and graffiti tags. Are these landscapes we were once responsible for forming and yet are no longer able to bear witness to in some imagined future?

Sirpa Pajunen-Moghissi presents an ecology of respect in her panel paintings. Images of natural history are presented against tessellated kaleidoscopic surfaces, suggestive of the interwoven nature of all things in this world. A reminder of how serious human negligence may be. Pajunen-Moghissi signals her intention that we see nature as divine by directly referencing icon painting by means of technique, colouration, and materials. Technology also plays a part in the construction of the images, leaving us with the question of whether its influence is necessarily a malign one or for the good.

Yes, we have amalgamation here in this powerful exhibition, but paradoxically so much of it also contains inherent or latent chaos. Does this speak of our time?