The return of Canadian- British artist Andrew Salgado for his fourth solo exhibition entitled Strange Weather at Beers London has been announced.

I have been polemic, subversive, political, and outspoken in the past, but I tired of that; I wanted to be Romantic. Playful – AS

This is his first full-solo with the gallery since 2016. Salgado’s paintings have evolved dramatically since the large-scale, painterly portraits he became known for almost a decade ago. Though they have become less autobiographical and increasingly stylised, it can be maintained that ultimately, his paintings are about the ‘human condition’. Unfurling over almost 20 pieces, the exuberant body of work continues his development of fantastical narratives, mythology-build- ing, and contemplation of the individual. All of this is exhibited through skilful handling of colour, a knack for powerful compositions, and a loved, as well as a wry sense of humour. 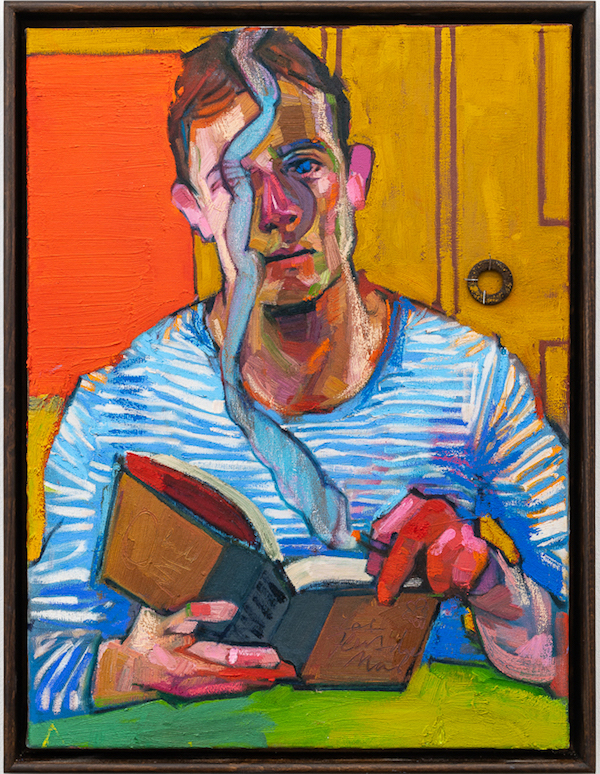 Andrew Salgado The Man Who Saw Everything

Strange Weather leads the viewer through a trail like chapters in a magic-realist novel, allowing them a peek at Salgado’s peculiar world of allusions, appropriations, nods to art-history, various inspirations, and a host of subtle literary references. Salgado, an avid reader, creates a continuity between paintings, each with its relevant characters and settings, like an act in a more powerful Quixotic story.

A self-proclaimed ‘maximalist’, leans into his ‘Salgado-Esque‘ tendencies with a healthy dose of kitsch: orb-like oranges roll from painting to paint- ing; massive, low-hanging moons adorn almost every piece; serpentine cat-tails weave through the compositions; curlicues of smoke obscure figures; and Benday-dot style stars oat in the night sky. Never one to shy from excess, the artist manages these motifs with effortlessness and energy – resulting in works that while reverberating and chaotic, also at times seem calm, dreamlike, or serene. Salgado states that occurrences in both his personal life and the world at large have allowed him to become more at ease when creating this body of work.

I have been polemic, subversive, political, and outspoken in the past, but I tired of that; I wanted to be Romantic. Playful… But these works also evoke sensations of seduction, mystery, warmth. Given the uncertainty and confusion this year, I just allowed myself to oat into something fantastical – a land of make-believe. Something is reassuring but also disquieting about the works. Esoteric. Coded. Something ‘just a little bit o ’. In that sense, they retain mystery for me as well. We warmly welcome you to lose yourself in Salgado’s wonderfully strange world. – AS

Andrew Salgado’s paintings have evolved a wry sense of humour and self-awareness is Midnight’, Thierry Goldberg, New York (2016). broadly in style since the large-scale, readily referenced – and critiqued. There is He has exhibited his work at various international painterly portraits he began painting similarly a desire to evade autobiography for art fairs including Untitled Miami (2019); Zona about a decade ago, where large the non-sequitur and playful. And as such, Maco, Mexico City (2019); Pulse Miami (2016)

Swathes of colour played across the surface; the works tend to be bright, celebratory, even and Volta Basel (2015). In 2015, Salgado curated his subjects. In his most recent work – the representational has given way to the more abstract. Now colourful, symbolic, and compositional elements are the driving force of the painted image, but a complex interweaving of figures remain a common thread.

Today his subjects are depicted in a fantastical, often ominous tableaux, with any combination of patterns, abundance, and excess play upon the painted surface, including harlequin-like figures, the motif of a massive, low-hanging moon; or other unrecognisable figurative shapes sift in and out of the composition, partially obscured or partially revealed. Where there once was a desire to place the figure at the forefront of the image, now there is a kind of harmonious cacophony that creates a sort of chaotically orchestrated puzzle. There are abundant references to the tradition of figurative painting both historical and contemporary: Matisse, Gauguin, and Bacon are all readily recalled; while contemporary greats like Tal R, Daniel Richter, and Peter Doig are also referenced with equal reverie and respect – often like subtle in-jokes for a viewer to catch.

In his most recent series (entitled ‘Paper-Bag Prince’), completed for Untitled Art Fair Miami with Beers London, the very act of painting with theatrical, with an underlying macabre or dark aspect. For Salgado, each exhibition provides an opportunity to extend elements of the painting beyond the canvas–an invitation into a world of colour, fantasy, and fun.
ANDREW SALGADO (b. 1982, Regina, Canada) lives and works in London, England. He graduated with an MA in Fine Art from Chelsea College of Art and Design in 2009, and has since had 13 sold-out solo exhibitions held all over the world, and is widely regarded as one of the UK’s leading young figurative painters. In 2017, Salgado was the youngest artist ever to receive a survey- exhibition at The Canadian High Commission in London, accompanied by a 300-page monograph, both of which were entitled TEN. Previous solo exhibitions include: ‘Blue Rainbow’ Angell Gallery, Toronto, (October 2018); ‘Nature Boy’, Beers London, (2018); ‘Dirty Linen’, Christopher Moller Gallery, Cape Town (2018); ‘A Room with a View of the Ocean’, Lauba Art House, Zagreb (2017); ‘The Snake’, Beers London, (2016); ‘The Fool Makes a Joke at The Fantasy of Representation, including work by Francis Bacon, Gary Hume, and Hurvin Anderson, with a passionate manifesto on representational painting. In 2014 he was the subject of a documentary, Storytelling. He has received extensive press both online and in print, including GQ, The Evening Standard, The Independent, Artsy, METRO, Attitude Magazine, Globe and Mail (CAN) and Macleans (CAN). He frequently donates to charities including Pride London, Stonewall, and Diversity Role Models; his donations to the Terrence Higgins Trust are of particular note, having raised over £110,000 in 6 years; including £35,000 for a single piece in 2020. In March 2019, he successfully entered the secondary market with a piece in a Strauss & Co auction in South Africa. His works have been collected extensively in private and public collections worldwide. Salgado has