Since its inception, Art Brussels has evolved into one of the top European contemporary art fairs and is a must-see in the international art calendar. Over 26 – 28 April 2019 (Preview & Vernissage 25 April 2019), the European capital becomes a focal point for collectors, gallerists and art lovers from all over the world. Art Brussels provides a unique opportunity to explore the artistic richness of the city, which is home today to an ever-greater number of artists, galleries and curators.

This year for our 37th edition, Art Brussels continues to be pivotal to the development of the city’s dynamic art scene – Anne Vierstraete

“As always, the fair will display expertly curated and high-quality booths with works from some of the most exciting artists and gallerists internationally. Through initiatives such as the new INVITED section, the fair demonstrates its ability to innovate in the rapidly evolving contemporary art market and art fair landscape.” – Anne Vierstraete, Managing Director of Art Brussels. The 37th edition of Art Brussels presents 157 participants, among which are 148 selected galleries representing 32 countries. With works from recently emerging to internationally established artists, Art Brussels remains resolutely contemporary. Among the 800 artists represented, over 90% are alive of which nearly a third are under 40 years old. 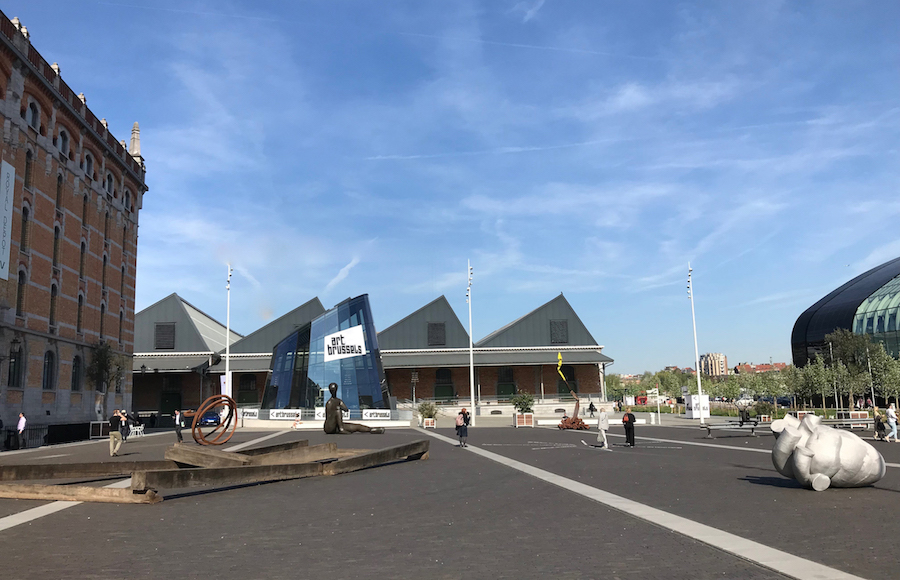 Art Brussels launches a new section, INVITED, which focuses on nine galleries, many of which are challenging the traditional gallery model and dedicated to emerging artists. This section includes Ballon Rouge Collective, a nomadic gallery, which has had exhibitions in Istanbul, London, Los Angeles, Sao Paulo, Paris, New York and recently opened a space in Brussels, whose booth will present works by Merve Iseri and Philip Janssens; Weiss Falk (Basel), who will bring a show dedicated to works by Laura Langer.

This year’s REDISCOVERY section (11 galleries) will include highlights such as acb Gallery (Budapest) and their presentation of works by Imre Bak, a key figure of the Hungarian neo- avant-garde and one of the most important Eastern European representatives of geometric abstraction; Eric Dupont (Paris) with works by the Argentinean Carlos Kusnir, based in Marseille, who questions the boundaries of painting, Axel Vervoordt (Wijnegem, Hong Kong) with works by Tsuyoshi Maekawa and a solo show of Georg Karl Pfahler, a leader of the geometric abstract style alongside Frank Stella, Ellsworth Kelly and Kenneth Noland, at QG Gallery’s booth (Brussels).

Further stand-out booths include Maruani Mercier (Brussels, Knokke, Zaventem), presenting Jaclyn Conley’s The Oval Office, a series of paintings analysing and reimagining the ‘American ideal’; o v project (Brussels) who will bring together collages and assemblages exploring many great Dadaists; Galerie Antoine Laurentin (Brussels, Paris), presenting a curated booth on the revival of wood sculptures in Belgium from 1945-1970; Sofie Van de Velde (Antwerp) and PLUS ONE Gallery (Antwerp) will confront the stark contrast between figurative and abstraction, and Sorry we’re Closed (Brussels) where Christoph Ruckhäberle will cover the entire floor of the booth with a piece. 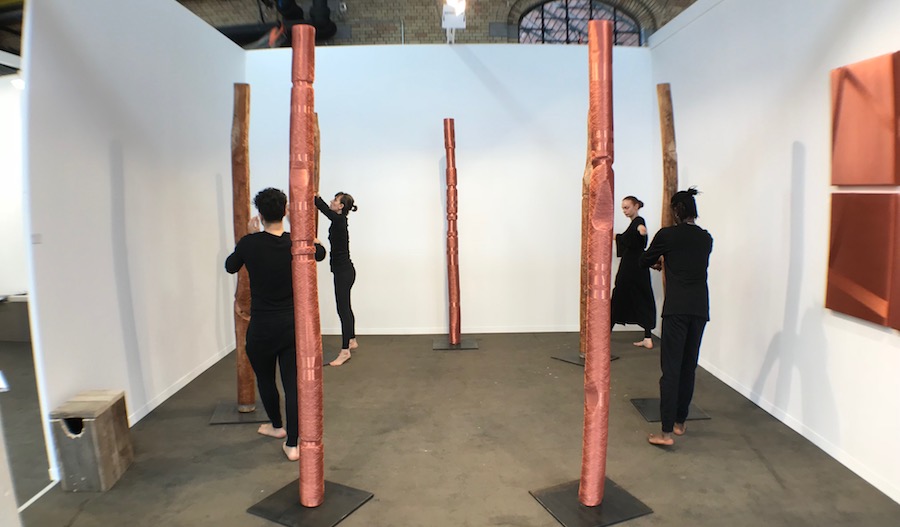 Performances
Paris) whose group show will include Mathis Altmann, Diamond Stingily and Matthew Lutz- and Freedman Fitzpatrick (Los Angeles,
Kinoy among others. Booth performances include Counter Space (Zurich) presenting Obsidian, in which Anne Rochat will press her naked body against a block of ice, creating an imprint; Freight + Volume (New York) in which Samuel Jablon will stand on his sculpture whilst reading aloud a poem; Catinca Tabacaru (New York), showcasing new works from Rachel Monosov’s The Blind Leader series, amongst which the artist will perform, and Charlot (Paris) with digital artist Manfred Mohr who will reenact his pioneering Plotter Drawings on a computer.

ArtBeats at The Belfius Lounge
For the third year in a row, Art Brussels proudly welcomes Belfius Wealth Management as the main partner of the fair. With a collection of more than 4,300 works, Belfius holds the largest private collection of Belgian art which spans five centuries and still continues to grow through the acquisition of contemporary artworks by Belgian artists. This year’s exhibition, entitled ArtBeats, will showcase a selection of 30 major works chosen by Belgian cultural personalities, providing a very personal insight into their passion for art.

Irmgard Speck at the Stibbe Lounge
In 2019, Jos de Gruyter & Harald Thys will represent Belgium at the 58th International Venice Biennale, with the exhibition Mondo Cane curated by Anne-Claire Schmitz. This year, the lounge of fair partner Stibbe features the exhibition Irmgard Speck, by the duo De Gruyter and Thys. It will present a series of sculptures of 3D-printed heads, which are made from plaster, fake hair and paint and present the faces of notable figures such as politicians, dictators, celebrities and criminals.

In the stand of the Federation Wallonia-Brussels, the exhibition curated by Nicolas de Ribou bringing the work of artist Lucie Lanzini and titled What comes out is what’s inside evokes both the liberated form of the mould and the work emancipating from the workshop. A set of sculptures realised by the technique of the moulding is presented to offer an introspective
glance on the forms, objects and tools of the workshop summoned daily by the artist in the realisation of her pieces.

The 37th edition sees the launch of the new and diverse INVITED section which supports a younger generation of international galleries who have never participated in the fair, giving them a complete carte blanche for their booth. This section will include galleries that are championing the shifting art market and challenging the traditional gallery model such as; Ballon Rouge Collective, a nomadic gallery which since 2017 has travelled to Istanbul, London, Los Angeles, Brussels, Sao Paulo, Paris, New York, and will launch a new hub in Brussels called B.R. Clubhaus; La Maison de Rendez-Vous, a new Brussels space initiated by four international galleries, LambdaLambdaLambda (Prishtina, Kosovo); Lulu (Mexico City); Misako & Rosen (Tokyo), and Park View/Paul Soto (Brussels, Los Angeles); Paid by the artist (Antwerp), a concept devised by Simon Delobel where the brand identity of his gallery-model adapts according to the artist’s vision. The INVITED section also presents galleries with more traditional models and internationally recognised emerging programmes such as Damien & The Love Guru (Brussels); Freedman Fitzpatrick (Los Angeles, Paris), High Art (Paris), and Weiss Falk (Basel) among others. 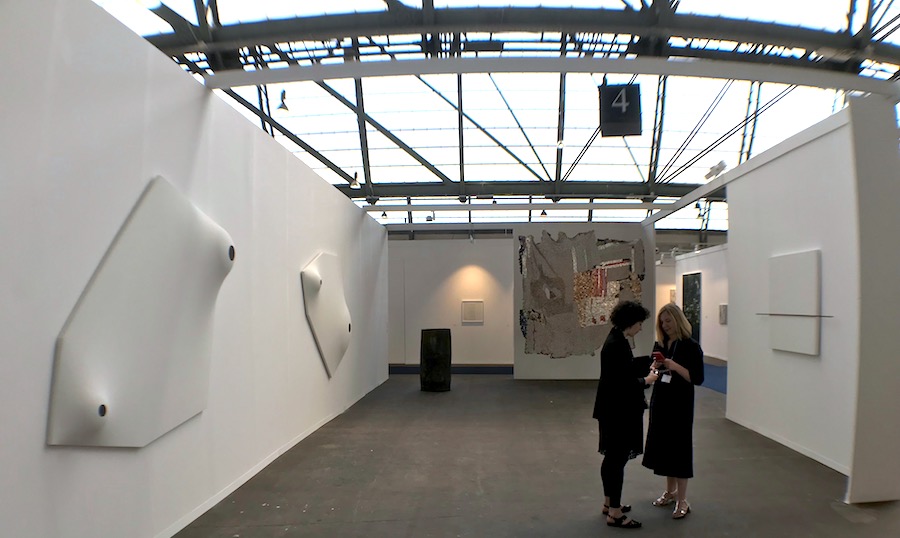