Mid-career artist Helen Evans Ramsaran’s sculptural contemplations from her solo show Extinction on ancient humanity and nature are inspired by her experiences traveling through Egypt, Ghana, the Ivory Coast, Senegal, Sierra Leone, Tanzania, and Zimbabwe, particularly at ancient Olduvai Gorge in Tanzania, where the remains of the first humans were found from 1.9 million years ago.

Her contrived fossilized artefacts are moulded through an intuitive connection with the African continent. Many of Ramsaran’s early bronze artworks speak of ancient relics, primordial worlds, an era we can hardly imagine full of creatures and nature referenced from museum exhibitions and books of their ossified remains. On the occasion of Ramsaran’s traveling solo show at the Chrysler Museum in Virginia and its final destination at the Studio Museum in Harlem, Okwui Enwezor the former Director of the Haus Der Kunst, art critic, and editor of NKA: A Journal of Contemporary African Art described her sculptures as “Spindly, attenuated forms, the body’s essence fills the exhibition space with an explosive, troubling aura. Connections to the body’s temporal habitat have been substituted with its flight from the cage.” 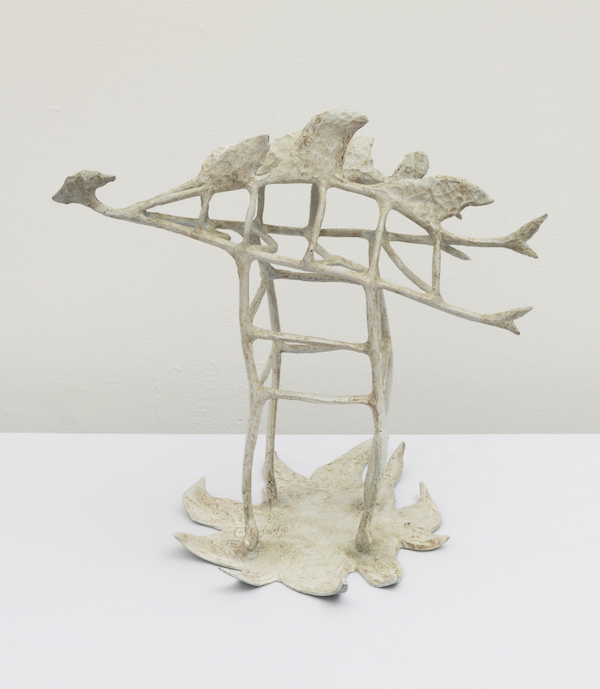 Ms. Ramsaran embodies the “artist archaeologist,” inhaling the ether of prehistoric culture and landscape while exhaling primordial metallic sculptures. She makes her singular mark in these older works from the 1990s, echoing a spiritual relationship to the primaeval life force. The striking sculptural work on view now at the Welancora Gallery in Bedford Stuyvesant, Brooklyn, is visceral. Elemental and alive, talismans spontaneously reveal abstract hieroglyphics from the poured wax in which Ramsaran casts her moulds. They are indicators of the union between animals, humans, and nature embodied in forms that easily tell tales of life’s evolution and extinction.

It virtually appears that her sculptures were dug up from an archaeological dig. Yet, they have developed from the early awakenings of the prehistoric world from which we all come from with a contemporary perspective encompassing rights and rituals. They are relatable and emotional for their deep sensitivity has a way of drawing the viewer into the inner workings of Ms. Ramsaran’s practice. Her 1995 House Shrine embodies a reverence for the home that is woven into the natural world, a place in which humans live and die. Its inner staircase leads up or down in symbolic reverence to life and death. On each wall panel of the house, there is her unique imprint, the floor and stairs have textural motifs in abundance. Secluded in the Grove is a 6-foot high bronze tree that Ms. Rasmsaran explains is a “metaphor for a village or many families” Five trees united in one sculpture. The beams of houses are made up of branches in which fire juts out of its leafy visage, a transformational element referencing rituals; bursting out from the inside of the homes of many communities while ladders make a connection between the sky and the earth; between God and man.

12 Years the exhibition on view now at Welancora Gallery is a continuation of ideas Ramsaran presented in her solo exhibition Extinction: Signals of Alarm at Wilmer Jennings Gallery, in 2017. The veteran sculptor has spent decades refining her practise exploring the relationship between humans and nature, now she has created a compelling indictment in clay to what is the result of humankind’s ignorance — the dying oceans. In her most recent artworks, she presents an end of the world scenario of formerly sentient creatures reduced to colorless skeletal remains due to the polluting of our oceans called “Ghost Species” A sadly beautiful testament to the crisis we face as the oceans continue to warm, if we don’t pay attention we will see the tragic results of our own making in 12 years according to climate scientists. They are the sea creatures, insects, and coral– bleached and dead; they represent the possibilities of a greater catastrophe which has already begun to harm our ecosystem.

However, the turquoise backdrop of the sea in which Ms. Ramsaran suspends her creatures from translucent threads is incongruous to the elegant sandy bleached depictions of what is an evolving calamity. The choice of colour for her dying ocean to my eyes leaves the installation incomplete which might have been better served by the illusory sea in which these pale apparitions developed under dubious climate change to compliment the possible consequences.

On the opposite wall, Ms. Ramsaran has encased her small multicoloured embryonic coral sculptures in groups of four set in glass boxes being born from simulated harvesting, reflecting on the current development of coral farming and resurrecting the species from annihilation. Here again, the work might be better served in a more vigorous portrayal than narrowly showing multiple framed glass square boxes of budding entities in dioramic repose. Coral is an animal spectacularly alive with colour and grace that takes time to grow under artificial circumstances. The installation is too subtle and contained an attempt to be persuasive. Still, 12 Years is an important metaphysical voyage through narratives of nature that are worth seeing at the Welancora Gallery. It will get you thinking about the past and the future…