Auto-Destruct, curated by Cedric Christie, Pascal Rousson & Stacie McCormick features works relating to and reflecting upon the nature of our aspirational technological inventions and the destructive nature they become. Many of the works regard the automobile as the device seen as the means to liberation, independence and a revolution for humanity. The automobile has led to wars, contributed to climate change and is responsible for over 3000 deaths a day. The ubiquitous vehicle is not scrutinised for its monstrous reality, and current car branding still sells a lifestyle as a symbol of wealth & glamour and independence. 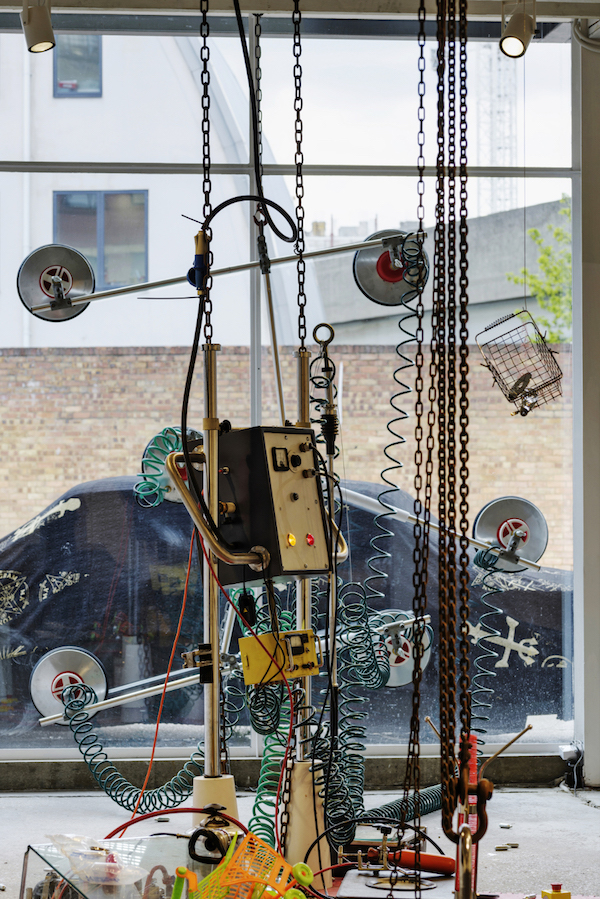 The exhibition’s title ‘Auto-Destruct’ is inspired by the work of Gustav Metzger (1926, Nuremberg – 2017, London). Metzger’s career was about alerting us to the risks in our deluded pursuit of technological progress, and humans being eclipsed by their machine selves. Auto-destructive art was inherently political; also carrying anti-capitalist and anti-consumerist messages. The exhibition examines themes of our fascination and capacity to be seduced by world-changing inventions and technologies that may or may not lead to improvements. The duality of any inventions capacity to create benefit or hazard is only proven in the dynamic, perhaps in the age of all available, all the time information we may have come to a time we can achieve wisdom in advance that may move away from our auto-destructive selves.

The exhibition was first shown at Unit One Gallery / Workshop London.

Since the launch in June 2018, Rebecca Scott and Mark Woods have been delighted with the response from visitors who have welcomed the “fresh new space” in Kendal and the work that Cross Lane Projects has added to Cumbria’s vibrant cultural scene. The gallery, situated in a former Kendal Mint Cake factory, has gained a reputation and recognition for bringing new contemporary art and challenging debate to Cumbria with a programme of exhibitions and events featuring the work of local, international and British artists.

Cross Lane Projects inaugural exhibition was, Female Trouble, Paula Rego & Rebecca Scott, a show that brought subjectivity to the fore; drawing together lithographs and etchings by Dame Paula Rego with a new body of paintings by Rebecca Scott, it offered a dialogue between these two female artists of different generations.

In a special event, Cross Lane Projects welcomed songwriter and musician Viv Albertine to the gallery in August to discuss her celebrated recent memoir To Throw Away Unopened with BBC Arts Producer and co-programmer of Borderlines Book Festival, Carlisle, Serena Field.

In September, as part of the Lakes Alive Festival, Mark Woods presented an extensive installation of “highly glamorous and ‘transgressive’ objects’ … packed with feminist, masculine, sexual and even religious ideas captur{ing} viewers’ senses”.

In October the gallery presented Not even nothing can be free of ghosts, a collection of new work by Mark Tanner Sculpture Award 2017/18 winner Frances Richardson. Richardson’s exhibition had been developed over a year as the 15th recipient of the major UK sculpture award and marked a significant development in her practice. The 2019 programme has so far seen Flugblätter, a project by Birgit Jensen and Miniscule Part 2. Flugblätter, which translates as ‘flyers’ or ‘flying letters’, sees 130 artists share their artistic responses to globalisation in an innovative and thought-provoking exhibition while Minsicule featured 220 artists taking up the invitation to submit a diminutive art object of any genre or media but with one simple proviso: the maximum size of the work is that of the common matchbox; 2” by 1.5”.