Bahrain has been chosen as the guest of honour at La Biennale Paris 2019. They will be taking on board a major Pavilion dedicated not only to contemporary art but also to crafts from this Gulf country. The pavilion will offer a panorama of Bahraini Art, design and crafts in their many forms.

Art Bahrain Across Borders Kaneka Subberwal along with Mathias Ary Jan, President of SNA will present under the nave of the Grand Palais more than forty works by twenty-one Bahraini artists at the Bahrain Pavilion. The Kingdom is this year’s ‘invited country’ at the 60-year old art festival, which takes place from September 13 to 17.

The pavilion was designed by Nathalie Crinière. The 364 square-meter ArtBAB Pavilion will be the largest at the show. It will also be the first time that traditional Bahraini artisans are part of the Kingdom’s art delegation at an international show of this stature. The Bahrain Room exhibits include two wall art installations and collectible furniture pieces highlighting the traditional handicraft techniques of Bahrain.

The exhibition is curated by noted art critic Pascale Le Thorel and artist/curator Amal Khalaf, both influential and knowledgeable within the global art world. 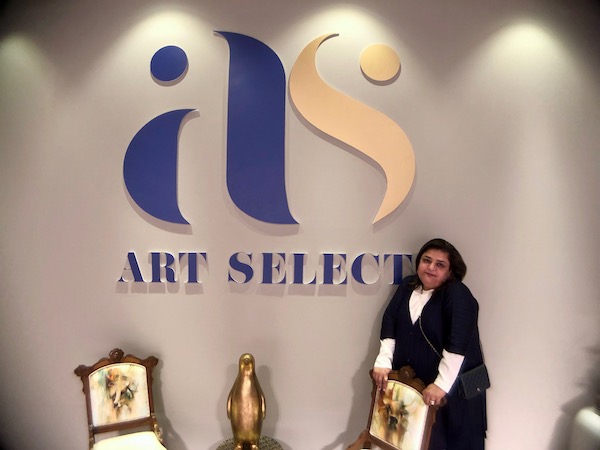 Celebrating Bahrain’s rich history as one of the oldest cultures in the Middle East, the pavilion serves to introduce art collectors and enthusiasts to Bahrain’s artists and artisanal craftsmen. Bahrain has been steeped in culture since the days of the Dilmun civilisation in the Bronze Ages and has much to offer the art world. An archipelago of 33 islands, once known as the island of a million palms Bahrain was the first Arab country to discover oil in 1932, remaining famous for its resources of oil and pearls.

‘Bahrain’ means ‘two seas’, and the waters surrounding the archipelago are unique. Fresh water from underground springs flow into the sea, and this seemingly miraculous phenomenon has led to legends, myths and traditions that give Bahrain its name. Flourishing as a busy port of exchange since 2000BC, the archipelago has since hosted numerous civilisations, from the Sumerians and Greeks through to the Portuguese and the British. Settlements, temples and thousands of burial mounds which are still intact form the largest prehistoric cemetery in the world. Found across the north of the island, they hail from the Dilmun period between the third and first millennium BC. Often the old and new intertwine in Bahrain, especially when it comes to the arts. Local artists and artisans create work that links ancient narratives to contemporary life.

Bahrain is home to a flourishing art scene that is now recognized by the international art world. Well documented is an art history that predates its establishment as a modern state, as the first country in the Gulf to welcome art with painting classes in 1919, and the first nation to open a cinema in 1937. By the mid-20th Century the first generation of painters started to emerge and an art society was formed that remains till today an active centre for art on the island.

Presenting a story of Bahraini art and culture, the pavilion will feature the work of twenty-one contemporary artists, alongside unique, rarely seen artisanal pieces developed by nine local traditional craftsmen as part of ArtBAB’s newly-launched crafts showcase, The Bahrain Room. The contemporary artists range from those born before and after the oil-boom, all of them witnesses to multiple histories and changing perspectives. The pieces in a diverse range of media from photography to sculpture. The works reflect the aesthetics of change, explorations into the material and cultural legacy of oil extraction and industry, the growth and decay of urban centers and aspirations to progress. 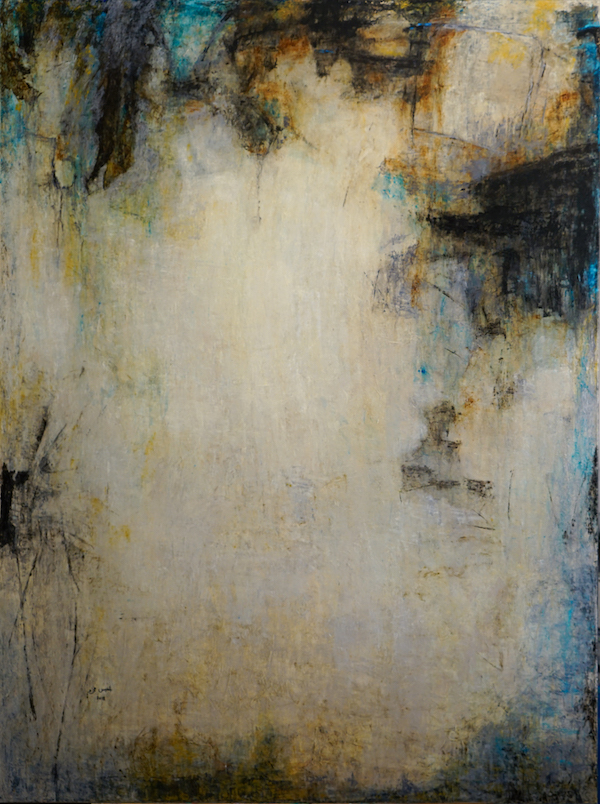 Balqees Fakhro will be showing a series of paintings. With a prolific career spanning three decades, Fakhro investigates prehistoric art, ancient images and objects as surfaces of memory, her paintings are dreamy and at once very lucid.

Another well-known painter is AbdulRahim Sharif, whose work has expressed such themes as alienation, hardship and emotional disconnection. The next generation of painters are also represented in the pavilion.

Also using a layered and collaged approach to painting and sculpture is the innovative practice of Abdulla Buhijji who combines graphic abstraction with spatial practice.

Similar themes are explored in a measured way in the work of Noof AlRefaei, layering figures and typography on abstract, layered surfaces.

Images and traces of Bahrain’s still thriving traditions are documented in the paintings of Ahmed Anan and Omar Al Rashed, often featuring female figures in colourful garb and hidden stories. 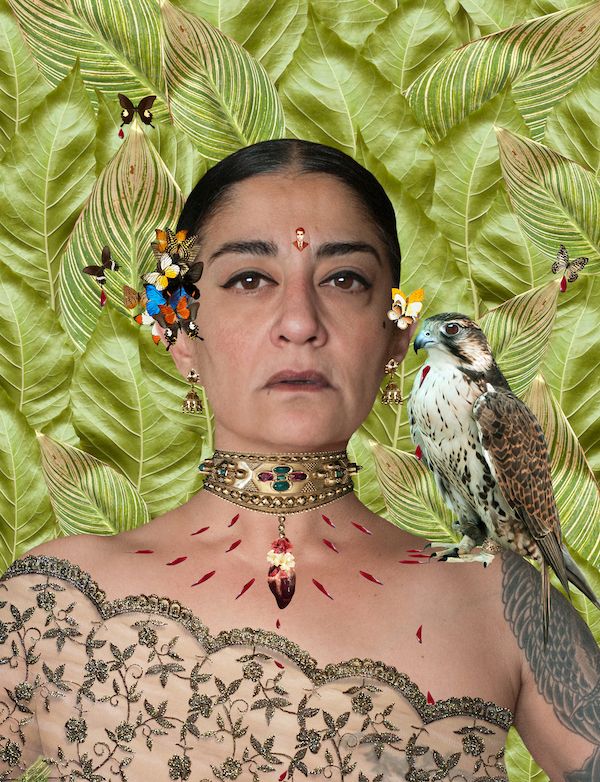 Aysha Almoayyed’s work is inherently experimental and encompassed drawing, photography and installation. Central to her work in an exploration of Bahrain it’s society and transformation of the built and natural environment through the lens of the personal, intimate and domestic.

Of a similar generation is internationally celebrated fashion designer and sculptor, Hala Kaiksow. Her creative process is driven by experimentation and exploring the endless possibilities of garment construction. From her loom, she weaves materials such as raw linen, silk and hemp into otherworldly patterns and textures, further embellishing them with fragments of metal, wood, latex and mother of pearl collaborating with traditional weavers and artisans.

The intricate work of Somaya Abdulghani, is made up of small installations produced through collage, photography and mixed media. She employs ideas from Islamic theological and philosophical aesthetics, by developing delicate, rhythmic and organic patterns in her art, in an attempt to mirror nature’s simplicity. Using drawing techniques, collage and found images and personal photographs her work for the pavilion is an intimate, personal departure from previous work.

In addition to contemporary art works, the Bahrain pavilion will introduce the Paris public to many traditional crafts and beautiful artisanal collaborations. From traditional doors, consoles, tables and installations, the craft on display combine ancient techniques from gypsum carving, copper nail work, wood carving, metal work and weaving. Although many of the featured pieces have been produced in recent years, they include the recycling of antique pieces reimagined, heavily inspired by the traditional practices and designs from old windows and doors to traditional boats. While the essential characteristics of traditional design was retained, the artisans have developed innovative approaches, stretching traditional forms whilst using the highest quality materials and ancient techniques. 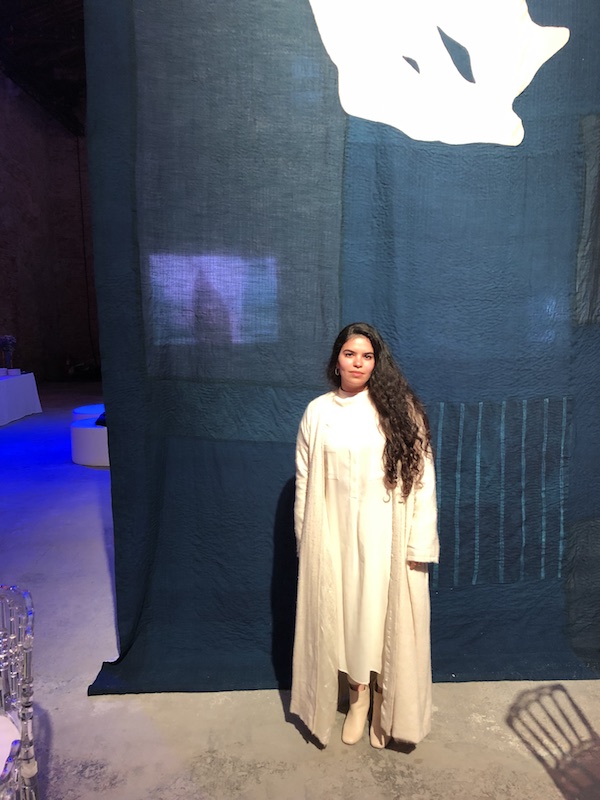 The Bahrain Pavilion will reflect the vitality of Bahrain’s Art in the fields of painting (abstract or figurative), installation and sculpture, photography and video. A final part of the exhibition aims to show some rare historical pieces from the ancient Dilmun civilization or goldsmithing.

Following the presentation of Bahraini women artists at the Grand Palais in 2018, this exhibition will be the first to be entirely devoted to Bahraini Art in France, since the three exhibitions of the Arab World Institute in 1999, and will shed light on authentic discoveries. The curatorial work is provided by Pascale Le Thorel, for the French part, and by Amal Khalaf, for the Bahraini part.