An exhibition of new work from international artists focusing on the Baltic Sea and the land that surrounds the waves. With a contribution from the legendary Jüri Arrak, celebrating his career in art and animation.

Jude Cowan Montague and Riitta Hakkarainen have personal or family links to the Baltic region. Riitta is of Finnish-Russian parentage and was brought up in Helsinki. Jude Cowan Montague has seafaring ancestors that arrived in Scotland from the Curonian Spit, the long, thin curved sand-dune that separates the lagoon from the coast. Formerly East Prussia, today it is a UNESCO World Heritage Site shared by Lithuania and Russia. 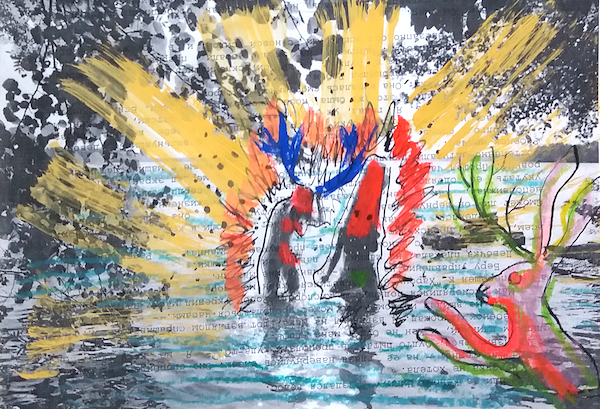 Riitta Hakkarainen is creating an original installation featuring robots from the future. This is about the Petrovichi town in Russia, near the Belo-Russian border that was raised to the ground during WW2. There is nothing left of the place where her great-grandmother lived, although Hakkarainen has her diaries which leave a poignant memory. In the midst of green fields, there is only a memorial stone dedicated to Isaac Asimov, who was born here. Hakkarainen is a scenographer with both Russian and Finnish heritage.

Jude Cowan Montague is displaying her ongoing series of metal plates that explore aspects of folklore, neopaganism and ancestral memory. She is influenced for her installation by life on the shifting sands of the spit. Montague is an award-winning printmaker (Gwen May Award 2013 from Royal Society of Painter-Printmakers) and was initially taught by Jean Lodge at the Ruskin who worked with Stanley William Hayter at Atelier 17.

Special guest Jüri Arrak is a painter known for his distinctive style and his creative work in many fields. He is one of Estonia’s most loved artists and creates a supernatural visionary environment with figures and graphics. His characteristic character has a masklike figure with a melting head, made recognisable by the animation Suur Tõll by Rein Raamat.

Meriliis Rinne alias MERU is an Estonian artist living and working in the UK. Her main medium is painting, but she likes diversity of material subject and form, and questions in her work ow to be an artist, a woman and human. She wonders if having grown up at the end of the Soviet era with its imposed uniformity influences her eclecticism. Here she is producing paintings inspired by the English painter Turner and the mystery of bogs and mires, important in Estonian folklore.
Natalia Jezova, born in Russia and having spent many years in Lithuania, has been working on a film about the silenced history of Jewish mass execution in Vilnius. Through landscape devoid of people, she captures human traces of the departed.

Cassandra Mahoney is a landscape and portrait painter with an engagement with the war history and the response of urban and natural landscapes to man-made actions and horror.

Triinu Soikmets is Estonian with roots that go back to Finland, Russia and traveller people and is a freelance curator and writer. She will present her series of visual stories which combine classics of local literature with her own analogue photos. Her established interest in curation is an extension of her identity as an artist, exploring how we may survive in contemporary chaos.

Veronica Shimanovskaya works with ephemera and micro-events, creating a reality of ‘just a moment ago’. Her work deals with nebulous imprints. She will create a new installation influenced by the essence of her birthplace – St Petersburg.

Silja Manninen is a fashion and textile designer with interest in creating participatory works that explore themes of social conscience. Ethical use of techniques and materials are integral to her practice.
Ann Grim is focusing on the far future of Tallinn, Estonia, as a submerged capital with numerous underwater contemporary and historical museums. She displays a diptych of a speculated bird’s eye view above the Baltic Sea in the year 3027.

Mandy Prowse is exploring her relationship with her Latvian grandmother, who died 30 years ago. Brought up and living in the UK, Mandy is embarking on a creative journey across a landscape both unknown and yet full of memories left by her grandmother Nata in paintings and writings.

Gzillion Artist is creating new work drawing on ice and the Baltic Sea. An active sculptor and art-organiser, his artistic adventures began through the creative curation of London based Croatian artist Vanya Balogh.
Ahto Külvet of Psühhoteek (Tartu, Estonia) is creating an original mixtape for the bar of Estonian fairytale and folk music, Soviet-era sounds and Baltic voices.