The National Portrait Gallery, London, has revealed the four artists shortlisted for the BP Portrait Award 2018. The award will be presented on 11 June 2018. The shortlisted portraits were selected from 2,667 entries from 88 countries, submitted for judging anonymously by a panel which included journalist and broadcaster Rosie Millard and artist Glenn Brown.

The four portraits in the running for the First Prize are Miriam Escofet’s portrait of her mother, An Angel At My Table; Time Traveller, Matthew Napping by Felicia Forte which shows her partner Matthew DeJong asleep in bed; Ania Hobson’s A Portrait Of two Female Painters, depicting the artist and her sister in law, Stevie Dix, and Zhu Tongyao’s portrait of his Italian neighbour, Simone.

The BP Portrait Award, one of the most important platforms for portrait painters, has a first prize of £35,000, making it one of the largest for any global art competition. The winner also receives, at the Gallery’s discretion, a commission worth £7,000 (agreed between the National Portrait Gallery and the artist). The second prize winner receives £12,000, and a third prize of £10,000 is also awarded. The BP Young Artist Award, with a prize of £9,000, goes to one selected artist aged between 18 and 30.

2018 will mark the Portrait Award’s 39th year at the National Portrait Gallery and 29th year of sponsorship by BP. This highly successful annual event is aimed at encouraging artists over the age of eighteen to focus upon, and develop, the theme of portraiture in their work. The prize winners will be announced on the evening of Monday 11 June 2018. The BP Portrait Award 2018 exhibition will run at the National Portrait Gallery, London, from Thursday 14 June to Sunday 23 September 2018. 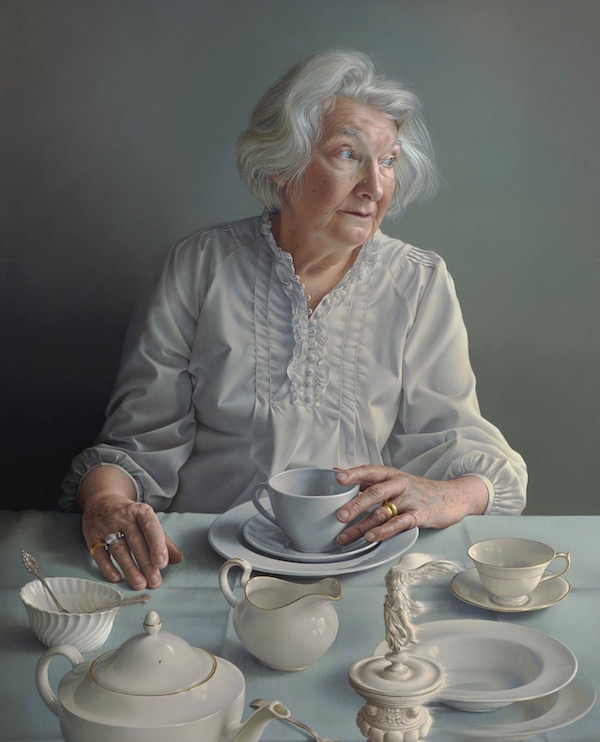 An Angel At My Table shows Escofet’s elderly mother sat at her kitchen table surrounded by tea crockery. The painting suggests a sense of space, perspective and time which conveys the sitter’s inner stillness and calm. Escofet says she was also conscious while painting that she wanted to ‘transmit an idea of the Universal Mother, who is at the centre of our psyche and emotional world.’ 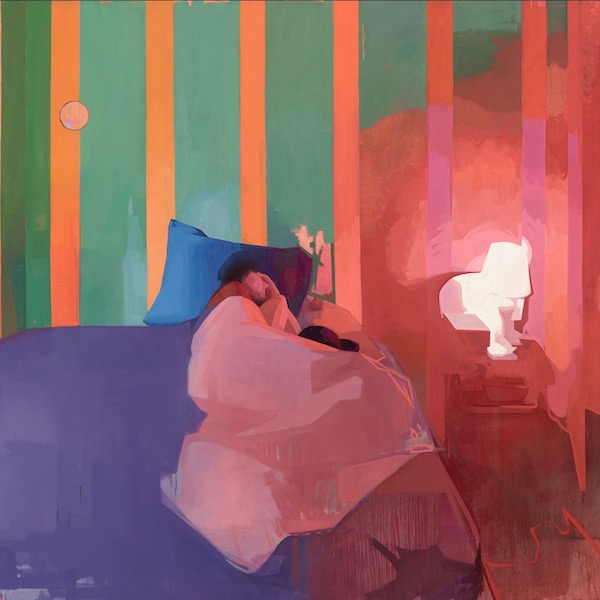 Felicia Forte studied at the California Art Institute and The Art Students League of New York. Her work has been seen in numerous exhibitions in the USA. Forte was Artist-in-Residence at de Young Museum of Fine Art, San Francisco and her work Self-Portrait, Melting Point was selected for the BP Portrait Award 2015 exhibition. Felicia Forte (28.12.1979) for Time Traveller, Matthew Napping, (1830mm x 1830mm, oil on linen)

Time Traveller, Matthew Napping finds Forte’s sweetheart Matthew DeJong asleep on a sweltering summer’s day in Detroit. Forte says she was struck by the beautiful contrasts in the scene – the ‘cool light from the window meeting intense red light from the bedside lamp and the loneliness of the sleeper amidst the festive colours.’ The portrait was the culmination of a body of new work made in residence summer 2017 at Redbull House of Art in Detroit. 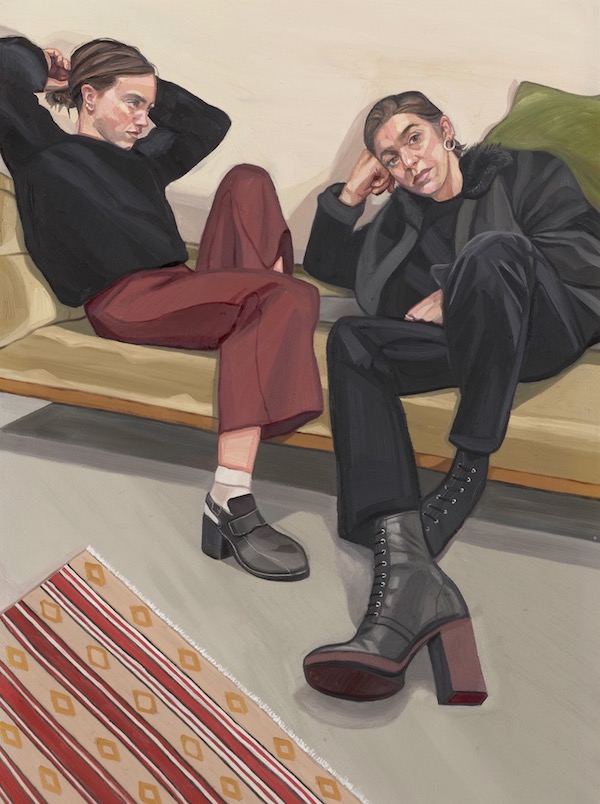 Ania Hobson undertook a degree in fine art at the University of Suffolk followed by short courses at the Prince’s Drawing School and Florence Academy of Art. Her work has been seen in group exhibitions in the UK and the annual exhibitions of the Society of Women Artists and the Royal Society of Portrait Painters. Her self-portrait, Ania, was selected for the BP Portrait Award 2017 exhibition. Ania Hobson (05.04.1990) for A Portrait of two Female Painters (1600 x 1200, oil on canvas)

A Portrait of two Female Painters depicts the artist with her sister in law Stevie Dix and explores the relationship between the two of them as painters working in the studio together. Hobson used an upward perspective to allow the viewer’s eye to map the portrait and convey a feeling of confidence and creative energy which celebrates female painters today. 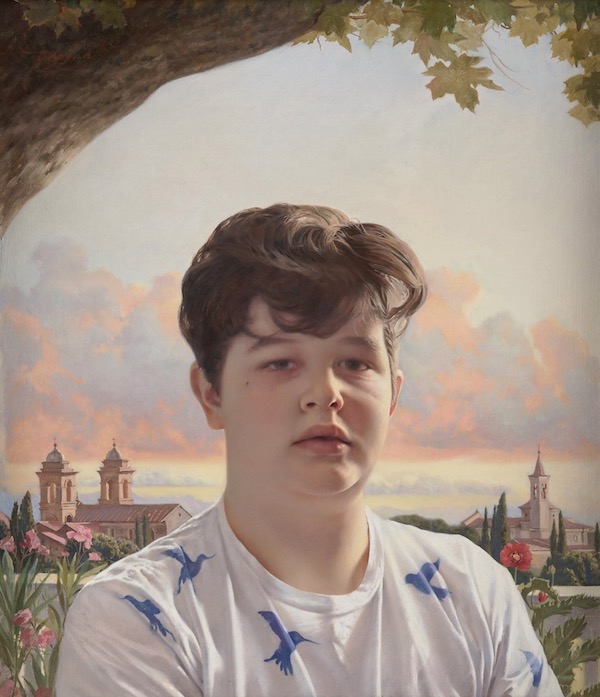 Zhu Tongyao was born in Jinan, Shandong and attended China Central Academy of Fine Arts and the Academy of Fine Arts of Florence. Tongyao has exhibited in Italy and China and in 2015 was awarded first prize in the Florence Biennale – International exhibition of contemporary art. This is the first time Tongyao has entered the BP Portrait Award. Zhu Tongyao (15.4.1988) for Simone (540mm x 460mm, oil on canvas)

Simone was painted while Tongyao was studying in Italy. The portrait depicts Simone, the child of the artist’s neighbours who took care of Tongyao during his stay. The painting shows Simone with a joyful expression on his face reflecting the peace that his family brought to him. The work captures a moment when the boy sat down, and the sunlight fell on his face, which Tongyao says ‘recalled my cherished memory of happy time spent with his family.’

Dr Nicholas Cullinan, Chair of the Judges and Director of the National Portrait Gallery, London, says: “The BP Portrait Award exhibition is an annual celebration of contemporary painted portraiture by artists of all ages from across the world and continues to attract submissions from the medium’s best practitioners. Judging anonymously requires each panel member to address precisely what they believe makes an outstanding portrait, weighing up the relative importance of technique, likeness, narrative, structure and the overall impact of a work through a lively process of debate and discussion, so I want to thank my fellow judges for that. I am delighted with this years shortlist and the final selection of works for the exhibition and congratulate all the artists involved.”

Ms Des Violaris, Director UK Arts and Culture BP, says: “The BP Portrait Award has established itself as one of the most important platforms for portraiture in the world, and with the value of the prizes increasing across all categories this year it is also one of the largest of any global art competition. BP is a major supporter of UK arts and culture, and we are extremely proud of the continued success of this award programme and its associated exhibition. Congratulations to all of this year’s artists who will showcase their work in London, Wolverhampton and Edinburgh.”

To enter, artists were invited to upload a photograph of their finished painting to the BP Portrait Award website, which was considered by the judges in the first round of the competition. 215 entrants were successful in this round and invited to hand-deliver or courier their work to a venue in London for the second round of judging. From this 48 works were selected for the BP Portrait Award 2018 exhibition.

One of the 48 exhibited artists will receive the BP Travel Award 2018 an annual award of £7,000, which allows artists to experience working in a different environment on a project related to portraiture. The resulting portraits are shown in the following year’s exhibition. The winner of the BP Travel Award 2018 is announced at the award ceremony on Monday 11 June 2018.

The BP Travel Award 2017 was won by Casper White for his proposal to create works about music fans in clubs and concert venues in Berlin and Mallorca, representing an often youth-related subculture that is not traditionally recorded in portrait paintings. The resulting work will be displayed in the BP Portrait Award 2018 exhibition.

The winners will be announced on the 11 June, with the exhibition opening 14 June.