The Hayward Gallery is to present a major retrospective exhibition devoted to the work of the celebrated British artist, Bridget Riley, in October 2019. The National Galleries of Scotland organised this exhibition in partnership with the Hayward Gallery and close collaboration with the artist. Opening in October 2019, this comprehensive exhibition will be the first museum survey of Riley’s work to be held in the UK for 16 years. The exhibition will place particular emphasis on the origins of Riley’s perceptual paintings and will trace pivotal, decisive moments in her acclaimed career. It will feature early representational paintings, iconic black-and-white paintings of the 1960s, expansive canvases in colour, recent wall paintings as well as studies and preparatory material. Alongside her best-known canvases, the exhibition will also include the only three-dimensional work that the artist ever realised, Continuum (1963), as well as new wall paintings made especially for the Hayward Gallery. Spanning 70 years of Riley’s work, the exhibition will offer visitors an unparalleled opportunity to experience powerful and engaging works by one of the most important artists of our time.

Ralph Rugoff, Director, Hayward Gallery said: “The Hayward Gallery programme for 2019 features major exhibitions by two of the most important and pioneering artists of the postwar era: Diane Arbus in February and in October Bridget Riley, whose long association with the Hayward stretches over four previous exhibitions, including the first UK survey of her work in 1971. 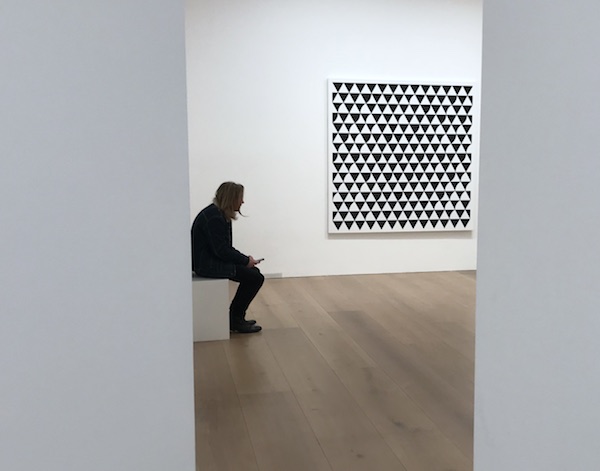 The Hayward Gallery, part of Southbank Centre, has a long history of presenting work by the world’s most adventurous and innovative artists including major solo shows by both emerging and established artists and dynamic group exhibitions. They include those by Bridget Riley, Martin Creed, Antony Gormley, Tracey Emin, Andy Warhol, Ed Ruscha, Jeremy Deller, Anish Kapoor, René Magritte, Francis Bacon and David Shrigley, as well as influential group exhibitions such as Africa Remix, Light Show, Psycho Buildings and most recently Space Shifters. Opened by Her Majesty, The Queen in July 1968, the gallery is one of the few remaining buildings of its style. The Brutalist architecture designed by a group of young architects, including Dennis Crompton, Warren Chalk and Ron Herron and is named after Sir Isaac Hayward, a former leader of the London County Council.

Bridget Riley is one of the most significant artists working today, dedication to the interaction of form and colour has led to a continued exploration of perception. From the early 1960s, she has used elementary shapes such as lines, circles, curves, and squares to create visual experiences that actively engage the viewer, at times triggering optical sensations of vibration and movement. Her earliest black-and-white compositions offer impressions of several other pigments while ensuring, multi-chromatic works present colour as an active component. Although abstract, her practice is closely linked with nature, which she understands to be “the dynamism of visual forces—an event rather than an appearance.”

Bridget Riley was born in 1931 in London, where she attended Goldsmiths College from 1949 to 1952 and the Royal College of Art from 1952 to 1955. Riley’s first solo exhibitions were held at Gallery One, London in 1962 and 1963, followed by two exhibitions at Robert Fraser Gallery, London, in 1966 and 1967. She was also at that time included in numerous group exhibitions such as Towards Art?, Royal College of Art London (1962); The New Generation, Whitechapel Gallery, London (1964); and Painting and Sculpture of a Decade 1954–1964, Tate Gallery, London (1964). In 1965, her work was included in the now-seminal group exhibition The Responsive Eye, organised by William Seitz at The Museum of Modern Art, New York. In 1968, she represented Great Britain at the 34th Venice Biennale (along with Philip King), where she was the first living British painter to win the prestigious International Prize for Painting. Her first retrospective, covering the period 1961-1970, opened at the Hanover Kunstverein in 1971, and subsequently travelled to Kunsthalle Bern, Kunsthalle Düsseldorf, Galleria Civica d’Arte Moderna, Turin, and the Hayward Gallery, London.