Bruce Nauman is the latest artist to be given a solo exhibition as part of the Artist Rooms series of annual free exhibitions. It will take place at Tate Modern’s Blavatnik building and open to the public until July 2018. Complementing the show is Nauman’s enigmatic sound installation Raw Materials, his acclaimed 2004 Unilever Series commission, which has returned to Tate’s Turbine Hall for summer 2017. Raw Materials, the sound installation created for the Turbine Hall in 2004 and subsequently acquired for the Tate collection, brings together 22 fragments of speech recorded over 40 years, transmitted from 22 speakers mounted on the walls. Walking through the Turbine Hall the visitor is encouraged to listen to a discord of voices relay incessant thoughts, exclamatory commands, and rhythmic chants.

Bruce Nauman (b. 1941) is widely regarded as one of the most innovative and influential American artists working today. Since the 1960s, his pioneering exploration of different media, in often funny, absurd or disturbing ways, has challenged conventions and had a profound impact on generations of artists internationally. Tate’s ARTIST ROOMS exhibition of almost thirty works spans the artist’s career with neons, video works, sculpture and works on paper.

Throughout the early 1970s and 1980s, Nauman created several neon sculptures that combined word play and bold colour to give alternative meaning to everyday phrases and expressions. A number of outstanding examples of these have been brought together including La Brea/Art Tips/Rat Spit/Tar Pits 1972, Run From Fear, Fun from Rear 1972, VIOLINS VIOLENCE SILENCE 1981-2 and Double Poke in the Eye II 1985. All demonstrate Nauman’s witty and insightful exploration of the human condition. 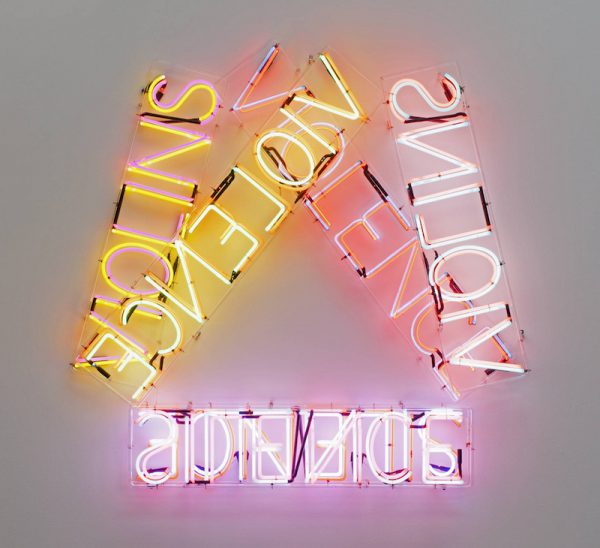 Nauman’s own body became an important reference point in his work, whether performing in videos or being cast to form part of a sculpture, such as the iconic Henry Moore Bound to Fail 1967/1970, which has not been exhibited in the UK for almost thirty years. He exposes the body’s vulnerability, as well as the human potential for violence and our need to communicate. The exhibition includes the important video work Raw Material with Continuous Shift – MMMM 1991, featuring video material of Nauman’s own head continuously rotating while emitting humming sounds. This landmark piece lures and unnerves the viewer with his trademark intensity.

Sound and the human voice are significant aspects of his artistic approach, be it using his own voice or employing actors to perform unsettling and humorous scenarios. Disrupting the traditionally quiet space of the gallery, Nauman has said he wants the experience of his work to be ‘like getting hit in the face with a baseball bat. Or better, like getting hit in the back of the neck. You never see it coming; it just knocks you down.’

The exhibition also features rare works on paper, as well as ground-breaking video works such as Raw Material Washing Hands 1996 and, from the Tate Collection, Good Boy Bad Boy 1985, in which actors hypnotically recite a catalogue of phrases. The iconic Violent Incident 1986, where a couple’s dinner descends into a cycle of destruction, is played on a loop across twelve monitors.

Bruce Nauman was born in 1941 in Fort Wayne, Indiana. He studied mathematics, physics, art, and music at the University of Wisconsin, Madison, and now lives and works in New Mexico. His work is in private and public collections worldwide, including Tate, the Museum of Modern Art, New York, and the Centre Pompidou, Paris. A major retrospective, organised by The Walker Art Center, Minneapolis, travelled throughout America and Europe (1993-1995). Recent solo exhibitions have included Fondation Cartier pour l’art contemporain, Paris (2015). Nauman received the Golden Lion at the 48th Venice Biennale in 1999 and the Praemium Imperiale in 2004 in Japan. He represented the United States at the 2009 Venice Biennale and was the 2014 laureate of the Austrian Frederick Kiesler Prize.