Twenty-one video and film installations, 11 hours plus of imagery created by today’s most radical image makers and at the beginning is an installation that takes us back to the beginning by mixing scientific history with Creation stories belonging to religious (Hindu, Buddhist, Jewish, Christian, Islamic, etc.), hermetic (Kabbalah, Freemasonry, etc.), and oral (Dogon, Inuit, Navajo, etc.) traditions.

Camille Henrot’s single-channel video Grosse Fatigue blends together origin narratives from many cultures and disciplines combined with images of work, exhibits and spaces at the Smithsonian Institute in Washington DC, where, as part of the Smithsonian Artist Research Fellowship, she was granted permission to film aspects of the collections. To these, she adds ‘images found on the internet and scenes filmed in locations as diverse as a pet store and a domestic interior that appear like pop-ups at the screen’s surface.’ 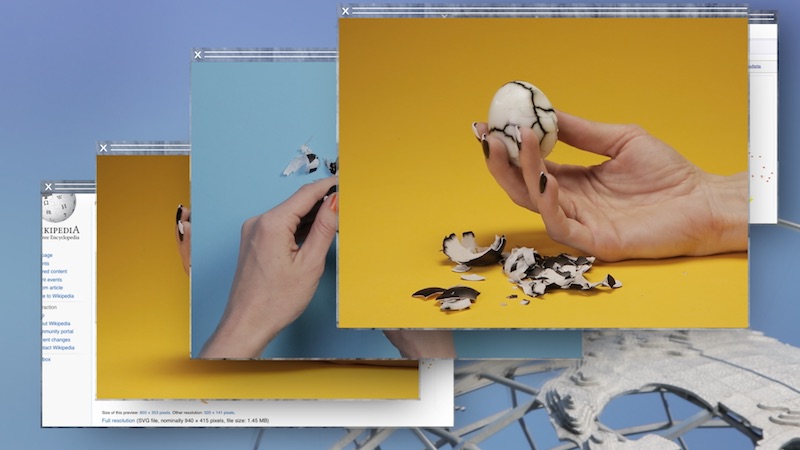 Henrot creatively layers origin accounts and imagery as a visual equivalent of the knowledge and wisdom juxtaposed within an Institute like the Smithsonian. Her layering is therefore of both images and words. Jonathan Chauveau explains that ‘the backbone of Grosse Fatigue is a long poem delivered in the style of spoken word, the form of expression used to great effect in the ’70s by the New York musicians The Last Poets’:

This means that in the beginning were words and those words defined life for those who used them; a reality described in some origin narratives, including that of Genesis where the story includes Adam naming each of the creatures he encounters as part of his quest to find a mate. We are a storytelling people, and our narratives provide the play within which we improvise our part.

Henrot immerses her viewers in the play of words and images that create the incredible breadth and diversity of human perceiving while, at one and the same time, suggesting that the universe is stranger still that we can perceive and imagine. As Chauveau notes, Grosse Fatigue presents ‘an infinite mass of information that, by definition, will forever remain in excess in the span of thirteen minutes.’ As a result, Grosse Fatigue suggests that the universe and our human perceptions overwhelm and exceed our understanding. 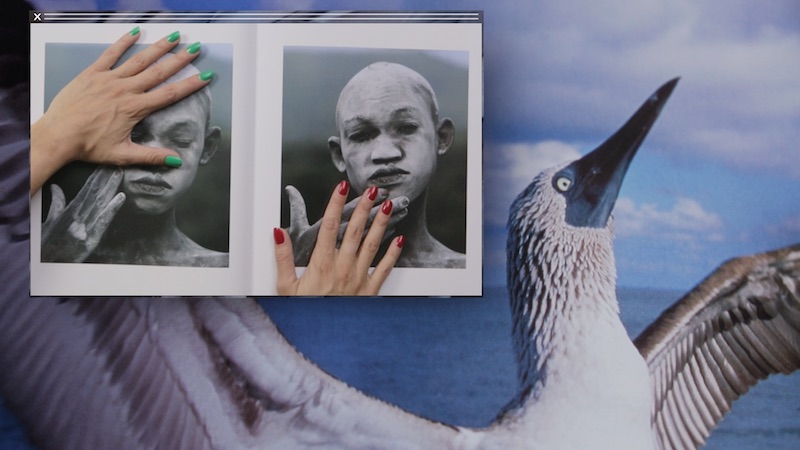 Henrot is ‘interested in the errors and unsolved problems of anthropology, being a science that takes we humans as both object and subject and our universe and world as both substance and projected meaning at the same time and, like art, continually critiques, overturns and transforms its own findings.’ About Grosse Fatigue she says: ‘In my video, the desire to universalise knowledge is accompanied by the conscience I have of this act. As soon as you think you have laid out and circumscribed the entirety of your universe within a single, selfsame landscape, isn’t the only question of any worth, and which relentlessly nags and torments the mind, inevitably the same as that with which Jonas Cohn ends his History of the Infinite (1896): “But what is there beyond the limit?’

This is the basis of apophatic theology, based as it is on ‘the assumption that God’s essence is unknowable or ineffable and on the recognition of the inadequacy of human language [or images] to describe God’ meaning that the best way in which to approach God is by negation. Chauveau quotes Jean-Luc Nancy: ‘Our question thus becomes clearly the question of the impossible experience or the experience of the impossible: an experience removed from the conditions of possibility of finite knowledge, and which is nevertheless an experience.’ This is, in essence, the place of faith, which the world’s great religions explore.