Sotheby’s Paris is to offer the personal collection of Claude & François-Xavier Lalanne this autumn. In a landmark dedicated two-day sale Sotheby’s will offer over 280 works of art from their personal collection. Les Lalanne were a power couple of pioneering, influential and beloved sculptors. They lived and worked alongside each other in perfect harmony for over five decades.

‘Les Lalanne’, as they affectionately came to be known, gave life to a poetic œuvre, injecting the familiar and functional with a dreamlike enchantment and overriding sense of humour and whimsy. Loved and celebrated by many of the leading artists, influencers and collectors of their generation, Les Lalanne were part of the cultural tapestry of the 20th-century arts scene, their work featuring on everything from Serge Gainsbourg album covers to Salvador Dalí’s dining table. 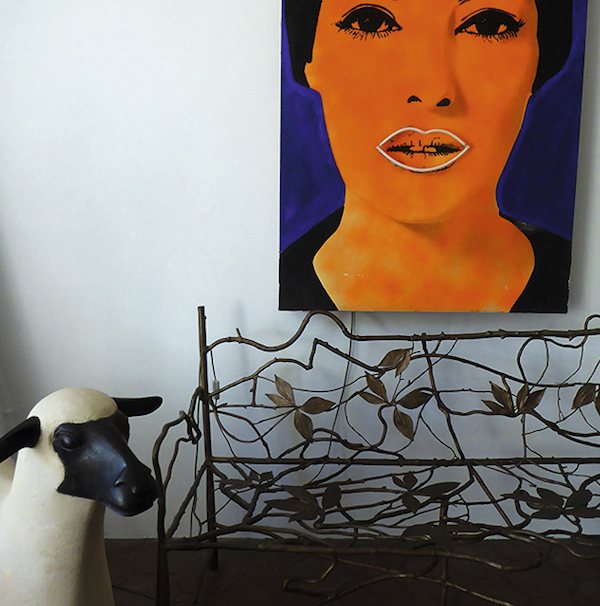 With each lot in the sale appearing at auction directly from their home and studio near Fontainebleau, these were the artworks with which they chose to surround themselves. The selection includes several significant pieces by the couple themselves, intertwined with works by artists who were friends of the duo, including Niki de Saint Phalle, Jean Tinguely, Max Ernst, William N. Copley, Jasper Johns and Elaine Sturtevant.

The fascinating exhibition and auction – initiated by Claude herself and today realised by her family – will invite viewers into the intimate world that Claude and François-Xavier inhabited and give a taste of the playfully surreal and highly fashionable aesthetic they embodied and engendered in their sculptures.

Florent Jeanniard, Head of 20th Century Design at Sotheby’s Europe, said: “It is both an immense privilege and a fantastic opportunity to have been chosen by the family of Claude and François-Xavier Lalanne to orchestrate this sale, as each object is imbued with the story of this mythic couple.”

Mario Tavella, Président-directeur général Sotheby’s France and chairman Sotheby’s Europe said: “I never had the opportunity to meet François-Xavier Lalanne, but I had the privilege of knowing Claude personally, and to be introduced to the wonders of her universe and deep affinity with the natural world. It is a great honour to be able to pay tribute to these internationally renowned artists, a couple who hold today a central place in the history of French art.”

The heart of the collection is dedicated to artworks created by Claude and François-Xavier Lalanne, which they devotedly treasured in their home. From the monumental to the miniature, each piece exudes the couple’s playful and unique take on design.

Highlights include the emblematic Grand Choupatte (“Cabbage Feet”), a bronze cabbage on chicken legs, with versions included in the world’s leading museum and art collections. Among other renowned designs by Claude are Bureau Crocodile (“Crocodile Desk”) – one of the most masterful interpretations of the artist’s crocodile motif – as well as her tables of ginkgo leaves and her highly sought after and creative take on jewellery.

Examples of François-Xavier’s amalgamation of art and furniture Lalanne comprise the Rhinocrétaire (“Rhinodesk”) – a bureau concealed within the form of a bronze Rhinoceros – a herd of the artist’s whimsical sheep sculptures (Moutons de Peter) and a large bar cabinet designed as a mouflon wild sheep (Grand Mouflon de Pauline).

Les Lalanne was at the centre of a cultural constellation, counting numerous painters, sculptors, writers, designers, architects and photographers among their intimate circle. These friendships are reflected in the collection, which features works by the couple’s artist-friends – an insight into their personal aesthetic and collecting tastes.

Among their coterie of artist friends were Constantin Brancusi, Salvador Dalí, Man Ray, Jean Tinguely, Louis Aragon and Jasper Johns. Their influence even extended to the fashion world, as Claude became the only artist with whom Yves Saint Laurent collaborated in the course of his career.

The selection includes Une Nana pour Claude, a work dedicated to the artist by Niki de Saint Phalle; a Raysse painting made by Elaine Sturtevant; and a moving drawing sent by Yves Saint Laurent to Claude and François-Xavier from Marrakech in December 1969.

Les Lalanne moved to their house and studio in the town near Fontainebleau, Claude’s birthplace, in 1967 – the year they were married – and lived and worked under the same roof for fifty years. Filled with decades-worth of their art, seamlessly integrated into a warm home, the house and its grounds provided a fantastic source of inspiration for the couple. Above all, they shared a love of nature that they each celebrated in their own way: Claude used the plants and flowers from the garden as a blueprint for her creations, while François-Xavier often incorporated animal imagery into his unique furniture pieces.