It’s been several decades since the British Artist Colin Smith exhibited in the UK. He has worked almost exclusively overseas during this time, in the USA, Sweden, a long period in a mountain village in Spain, and now is based mainly in Ghent, Belgium.

‘They have been planned as things that fill the very vacuum that they display.’ – Richard Wollheim

The works contained in this exhibition despite having been made over different periods share similar methodologies. Despite the imagery being rooted in the everyday observable world, and could be considered a form of Realism, all of the subject matter is invented, constructed from fleeting ideas, imaginings, drawings and to a lesser extent photographs. 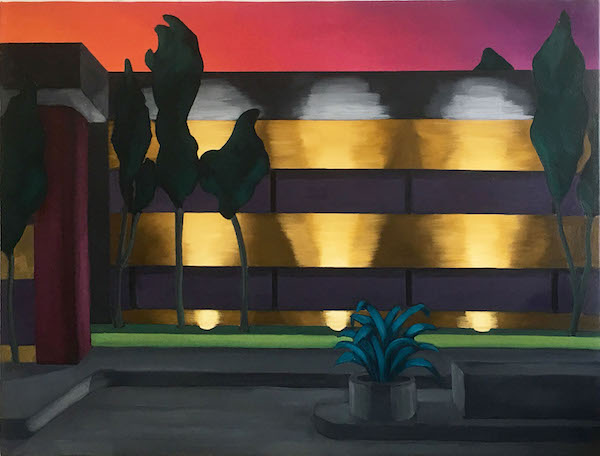 I am acutely aware of the abstract qualities of a painting and the process by which the images are formed or discovered is one of trial and error, usually quite a lot of error. My paintings are artificial rather than naturalistic. Artists are often asked what their work means or is trying to say. There is no finite meaning to any of this, it is more about trying to trigger some kind of response in the viewer yet the mechanisms to how this may work are mysterious and complex. I have endeavoured to make simple and powerful imagery which hopefully will be memorable. We simplify and reduce experience all the time in order to rationalise, categorise or remember  events that unfold. To some extent these paintings are an examination of that kind of process using colour, light and the sensual materiality of process. The ideal for me would be that the viewer has a different response to the same work on separate encounters, it’s role then being some kind of evocative mirror.’ 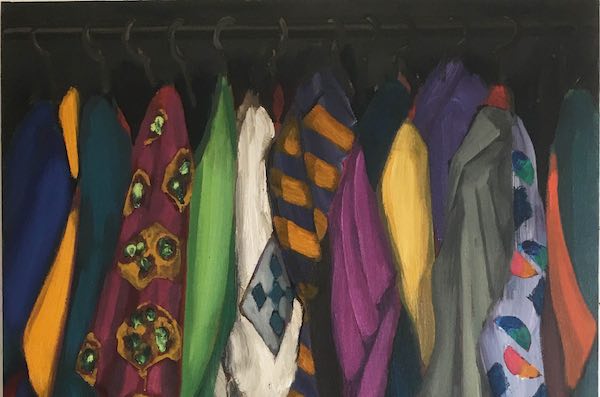 This body of work, largely unknown here, consists of several series of works on specific, idiosyncratic themes. The ‘Wardrobe’ series, for example, are improvisations based on hanging clothes which have many abstract qualities. The recent ‘Big Pharma’ series show rather sterile but beautiful corporate facades. Other works include people in domestic or urban environments, such as swimming pools. There is often a dramatic, melancholic or even sinister undertone.
He has work in several public collections, although rarely seen until now. However, a recent posting on the Tate Instagram feed gathered more than 11,500 ‘likes’ in 48 hours. There is a chance now to see a large body of work, including loans from the Tate and Arts Council Collections, occupying the whole of the Sir Alfred East Gallery in Kettering, Northamptonshire, just one hour by train from St. Pancras.

‘Investigations of a Dog’ the title of the show borrowed from a short story by Kafka, implies, as does the story, that there is intentionally no finite meaning or narrative contained in these works. They are influenced by past masters Goya or Velazquez, as well as many more contemporary sources, Richard Diebenkorn or Edward Hopper. The Philosopher Richard Wollheim wrote in an essay on his work – ‘They have been planned as things that fill the very vacuum that they display.’