This May, Tate Britain will present the first significant survey of work by Cornelia Parker in London. Parker is one of Britain’s leading contemporary artists. She is responsible for some of the most unique and unforgettable artworks of the past thirty years. Driven by curiosity, Parker transforms seemingly everyday objects into extraordinary works of art.

The exhibition will bring together over 90 artworks spanning immersive installations, sculptures, film, photography and drawing to celebrate the breadth of Parker’s highly experimental and wide-ranging career to date, including two new works shown for the first time. 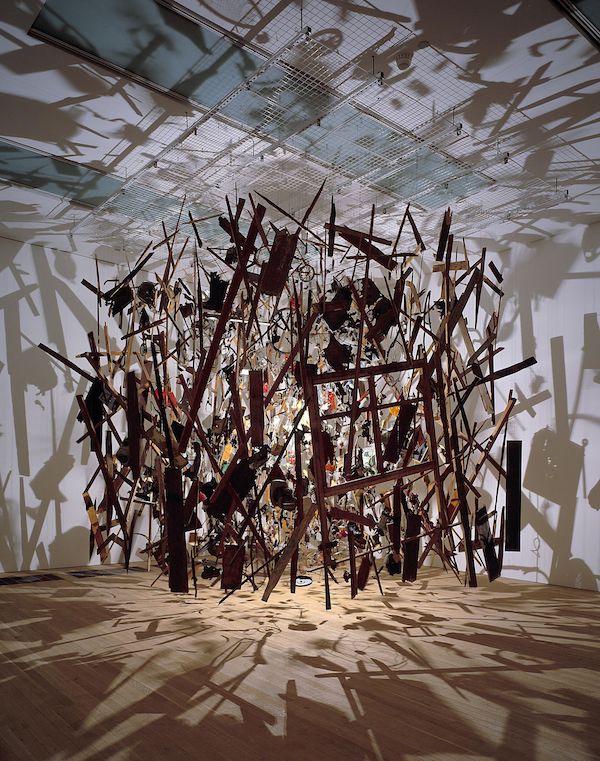 Cornelia Parker first came to prominence in the late 1980s, creating large-scale suspended installations and sculptures that have captivated audiences worldwide. This exhibition will include several of her best-known early works, including Thirty Pieces of Silver 1988-89, an installation of flattened silver objects including teapots, candlesticks and dinnerware collected from charity shops and car boot sales; and Cold Dark Matter: An Exploded View 1991, a garden shed frozen at the moment of explosion, its fragments surrounding a single lightbulb. In addition, examples of Parker’s more recent room-sized works will be included, such as War Room 2015, created from the reams of perforated red paper negatives leftover from the production of British Legion remembrance poppies, and Magna Carta (An Embroidery) 2015, a thirteen-metre long collectively hand-sewn embroidery of a Wikipedia page, which involved over 250 volunteers including public figures, human rights lawyers, politicians and prisoners.

The exhibition will spotlight Parker’s hugely inventive works on paper, including drawings, photographs and prints, and her more intimate sculptural objects. Highlights include the Avoided Object 1999 photographs of clouds, taken on a camera once owned by an Auschwitz commandant, and the inkblot Pornographic Drawings 1995-2006, created from dissolved videotapes confiscated by HM Customs and Excise.

Politics is a critical theme in many of the artist’s works, and in 2017 Parker was the first woman to be appointed official artist for the General Election. In this role, she observed the election campaign leading up to the 8 June vote, meeting with politicians, campaigners and voters and producing artworks in response. Several films made during this period will be shown in a cinema room within the exhibition, including Left Right & Centre 2018, filmed by a drone at night in the House of Commons; and Election Abstract 2018, documentation of Parker’s observations during the campaign, posted on her Instagram account. Other film works include Made in Bethlehem 2012-13, depicting a Palestinian father and son as they weave thousands of barbed crowns ahead of the influx of Easter pilgrims, and Chomskian Abstract 2007, an interview with the American social critic and philosopher Noam Chomsky about the entwined relationship between ecological disaster and capitalism.

Several of Parker’s artworks, including sculptures, textile-based works and video, will spill out beyond the confines of the exhibition and into Tate Britain’s collection galleries, presented alongside the historical works they reference. For example, in room for Margins 1998, an installation of the stained canvas linings and tacking edges of Turner paintings (removed by Tate conservators after a flood in 1928) will be hung in the dedicated Turner galleries at Tate Britain. The Distance (A Kiss with String Attached), 2003, Parker’s provocative dialogue with Rodin’s famous Kiss, will greet visitors on arrival at the Millbank entrance.

Cornelia Parker is curated by Andrea Schlieker, Director of Exhibitions & Displays, Tate Britain, with Nathan Ladd, Assistant Curator, Contemporary British Art, Tate Britain. The exhibition will be accompanied by a significant new monograph featuring an extensive interview between Schlieker and Parker, discussing her thirty-year plus career. In addition, the book will feature contributions by collaborators from throughout Parker’s career, including Kostya Novoselov, Nobel Laureate for physics; Alan Rusbridger, editor of Prospect and former editor of The Guardian; and Jimmy Wales, founder of Wikipedia; as well as texts by leading art historians and writers including Margaret Iverson, David Campany, Jo Applin and Marina Warner.

Parker was elected to the Royal Academy of Arts, London, and made an OBE in 2010. She was elected the Apollo Awards Artist of the Year in 2016 and was awarded an honorary doctorate from the University of Manchester. In 2017, she was appointed the first female Election Artist for the United Kingdom General Election. She was made an Honorary Fellow of Trinity Hall, Cambridge, in 2021. Her works are held in public and private collections worldwide, including the Institute of Contemporary Art, Boston; Fundación “la Caixa”, Barcelona and the Museum of Modern Art, New York.