“Dame Joan is a true star, and it has been a life-long ambition of mine to sculpt her” – Frances Segelman

Dame Joan Collins’ sister, best-selling author Jackie Collins OBE, died of breast cancer aged 77 in 2015 following diagnosis in 2009. Ms Collins, who was adored by family, friends and legions of fans for over four decades, chose Penny Brohn UK to benefit from gifts in her memory. Despite living in the US, Jackie heard how Penny Brohn UK helps people with cancer to live as well as possible for as long as possible.

Frances Segelman, whose sculpture commissions include HM The Queen said, “Dame Joan is a true star, and it has been a life-long ambition of mine to sculpt her. I am so pleased to support Penny Brohn UK, and the incredible work it does to help those affected by cancer live healthier and longer lives.” 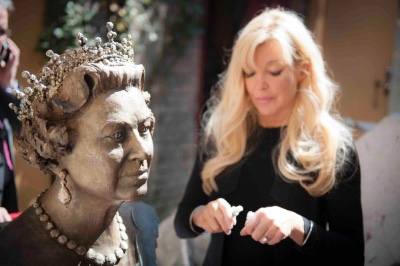 This fundraising evening will see celebrities, family and friends of Dame Joan, Sir Jack and Lady Petchey, and supporters of Penny Brohn UK in attendance.

Penny Brohn’s daughter Jess said, “I am absolutely delighted that Dame Joan and Frances Segelman are helping Penny Brohn UK through this truly unique event. The charity, named in honour of my mum, recognises that those living with cancer need more than medicine – something she instinctively knew when diagnosed with breast cancer in the late seventies. Through a whole person philosophy, my mum lived with joy and purpose for another 20 years, well beyond her prognosis. And now, her legacy lives on in their Bristol Whole Life Approach.”

As part of this event, there will be an exhibition of artwork by Josette Aitman, Victoria Perloff and Simon Tarrant, with proceeds being donated to Penny Brohn UK.

Frances Segelman, otherwise known as Lady Petchey, is a self-taught sculptor who has risen to the top of her profession having sculpted a wide variety of public figures including HM The Queen, HRH The Duke of Edinburgh and HRH The Prince of Wales. An established sculptor of personalities from the world of entertainment, politics and sport Frances’ recent commissions include Joanna Lumley, Lord Julian Fellowes, Sir Derek Jacobi and Holocaust survivors Ben Helfgott MBE, Ivor Perl BEM and Arek Hersh MBE.

Penny Brohn UK has over 37 years’ experience and recognises that people with cancer need more than medicine. The charity’s Bristol Whole Life Approach provides integrated whole person cancer support that works alongside medical treatment to achieve the best health and wellbeing. The approach explores areas such as diet, exercise, relationships and managing stress, through free residential and day courses, one-to-one therapies, groups and national helpline. Penny Brohn supports anyone with cancer and their loved ones, before, during and after treatment. Penny Brohn UK CEO Laura Kerby said, “We are incredibly honoured that Dame Joan and Lady Petchey have chosen to support Penny Brohn in this way – it really is a once in a lifetime event. Every penny raised will greatly help us continue to reach more people living with cancer across the UK who may benefit from our life-changing whole person support. We rely entirely on the kindness and generosity of people to raise the £2.5 million a year we need to run our free services for people and families facing this devastating disease.”

Joan Collins is first and foremost an actress. However, she is also a best-selling author, an accomplished producer and a successful entrepreneur. Winner of two Golden Globes and a People’s Choice Awards, nominated several times for Golden Globes, People’s Choice and Emmy awards, as well as recipient of numerous other awards worldwide, Joan has appeared in more than 60 feature films and dozens of television programmes. The daughter of theatrical agent Joe Collins and his wife Elsa, Joan Collins was born in London and made her London stage debut at the age of nine in Ibsen’s A DOLLS HOUSE at the Arts Theatre. Collins has appeared in more than 65 feature films and hundreds of television appearances, including creating the role of Alexis Carrington on Dynasty, one of the most highly rated television dramas of all time. Her novels and memoirs have sold over 50 million copies worldwide and have been translated into 30 languages. She is recognised world-wide as a fashion icon of timeless beauty, and is a regular diarist for The Spectator and a contributor to The Daily Mail, The Telegraph, The Times and Harper’s Bazaar. On stage, Joan Collins has performed on Broadway, the West End, and in national tours in the UK and North America.