Damien Hirst will be the next artist to take over Houghton Hall for their Spring/Summer exhibition. Colour Space Paintings and Outdoor Sculptures is the title of a new show to be held at this magnificent stately home, in Norfolk. The exhibition will feature a new series of paintings installed in the State Rooms while a number of the artist’s most celebrated sculptures will be installed throughout the 18th-century house and gardens.

Built for Britain’s first Prime Minister Sir Robert Walpole in the 1720s by Colen Campbell and James Gibbs with interiors by William Kent, Houghton Hall is one of the most elegant Palladian houses in the UK. The current owner Lord Cholmondeley has built up an impressive collection of contemporary sculptures by world-renowned artists, displayed in the gardens and grounds at Houghton. These include James Turrell, Richard Long, Anya Gallacio, Zhan Wang, Stephen Cox, Jeppe Hein, Rachel Whiteread and Phillip King, and many have been specially created for a particular place in the grounds. The Damien Hirst exhibition will be added to the list of previously successful shows held at the hall which include James Turrell and Richard Long. 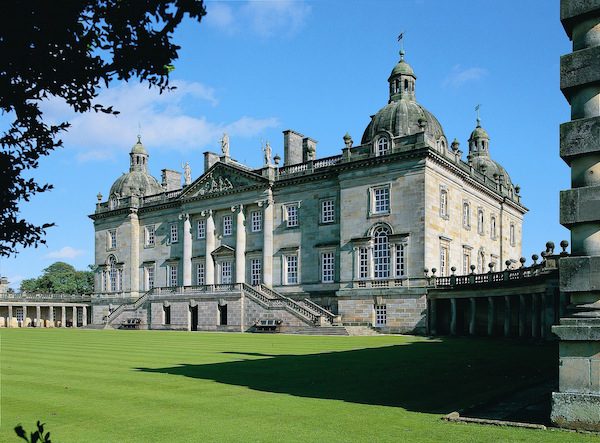 Lord Cholmondeley, said: ”We are delighted to have this opportunity to show Damien Hirst’s new paintings in the State Rooms at Houghton, together with some of his best-known sculptures in the grounds. It is perhaps the first time that Hirst has shown a significant body of work in a formal country house setting. William Kent’s gilded interiors will be transformed for the duration of the show.”

“The Colour Space paintings encompass a midpoint between the systematic and the painterly, the rational and the expressive in his work.” Ann Gallagher, Director of Collections, British Art, Tate.

Six sculptures will be installed outdoors in the park featuring some of the artist’s most famous and visually arresting works. They include the celebrated Virgin Mother (2005–2006) previously shown in the courtyard of the Royal Academy in 2006, and Charity (2002–2003) which was installed on Hoxton Square in 2003 and outside the Royal West of England Academy of Art in Bristol in 2011.

Three sculptures will be installed in the house: Saint Bartholomew, Exquisite Pain (2006) in the Entrance Hall, and two smaller kinetic sculptures from the artist’s “levitation” series featuring air blowers and table tennis balls, in the celebrated Stone Hall.

Damien Hirst was born in 1965 in Bristol and grew up in Leeds. He studied Fine Art at Goldsmiths college from 1986 to 1989, and whilst in his second year, he conceived and curated the group exhibition, ‘Freeze’. The show is commonly acknowledged to have been the launching point not only for Hirst, but for a generation of British artists.

Since the late 1980s, Hirst has used a varied practice of installation, sculpture, painting and drawing to explore the complex relationships between art, beauty, religion, science, life and death. Through work that includes the iconic shark in formaldehyde,The Physical Impossibility of Death in the Mind of Someone Living (1991) and For the Love of God (2007), a platinum cast of a skull set with 8,601 flawless pavé-set diamonds, he investigates and challenges contemporary belief systems, and dissects the uncertainties at the heart of human experience. In April 2017, he presented his most complex project to date, ‘Treasures from the Wreck of the Unbelievable’, across two museum spaces in Venice. Hirst lives and works in London and Gloucester.