The new American Embassy is a vast sparkling monolith in London’s Nine Elms area. It’s a fine building. Presumably, the powers that be felt the need for greater security or maybe they tired of clogging up Grosvenor Square in Mayfair, hence the move. The art collection amassed over the past century or so also has a new home. Portraits of all of the former ambassadors are thrown together with all a mish-mash of of painting and sculpture. To add to the gravitas they sit on freshly emulsioned alcoves beneath the contemporary swagger that takes up enormous wall spaces as far as the eye can see.

Yesterday, was the launch of the collection/new commissions: Rachel Whiteread, Sean Scully and other big names. I had an invitation to the event and had decided I’d donate ‘by stealth’ a series of 7 Trump portraits all beer mat size. Expressions of Trump in his bemused state of office. He doesn’t like the building or its art and won’t be visiting it on his UK tour later this week. I thought what better than to have a few pop-up portraits of him lurking in the nooks and crannies. 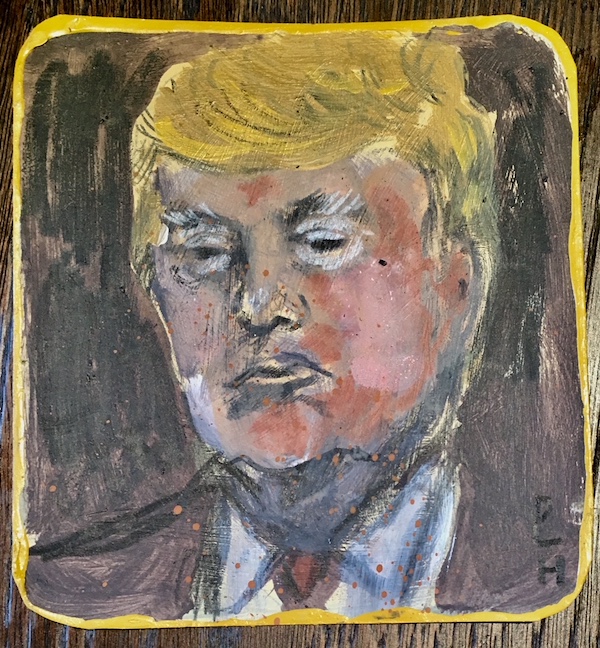 I put the first one up by the loos and within seconds it was clocked and amused three young guys who immediately went for the selfies – perhaps detecting its rouge quality. I gradually had these placed alongside ambassador portraits and next to the vast sculpture.

It was quite reassuring to see a small modest portrait could upstage these great installations and perhaps stimulate dare I say it. Anyway, the interns were made aware of this infiltration and must have started googling to see a mugshot. The paintings were gradually removed but not before scores of photo ops. Upon about to make my departure, a lady thanked me for coming and asked my name. I was rumbled but at the final hurdle and she thanked me and said in all honesty they didn’t think they could keep them up.

Dan Llywelyn Hall was born in Cardiff in 1980 and grew up in south Wales. He moved to London to study at the University of Westminster graduating in 2003.After studying he was awarded the Sunday Times/Singer Friedlander Young Artist of the Year for his painting ‘Ship Hotel and Splash’. A succession of group and solo exhibitions established Dan as a painter working directly from the landscape. 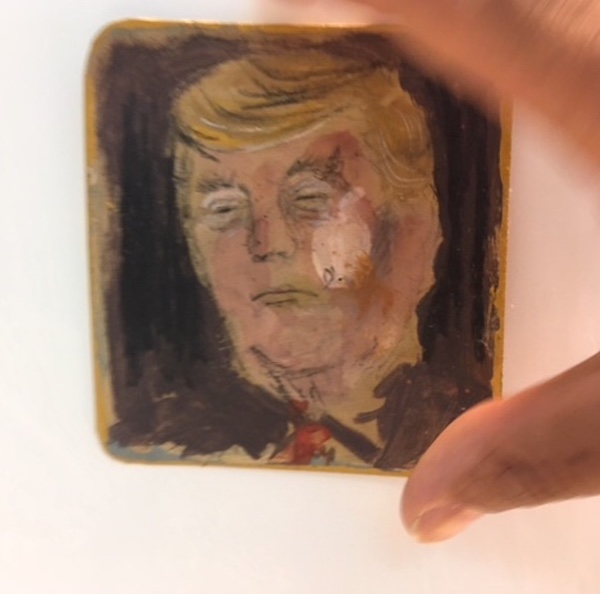 Increasingly, Dan became interested in portraiture, and after a commission to paint the Victoria Cross recipient Sir Tasker Watkins, he continued on the theme of veterans focusing on the last survivors of the first World War. In 2009 the then, last surviving veteran of the trenches, Harry Patch sat for his portrait, entitled ‘The Last Tommy’, which was selected for the BP Portrait Award and exhibited at the National Portrait Gallery where it was used as the face of the marketing campaign throughout London. Following this, Henry Allingham, then the world’s oldest man aged 113 sat for his portrait entitled ‘The Last Volunteer’. Recent portrait commissions include Her Majesty the Queen, in 2013, when Dan became the youngest artist to portray the monarch, shortly followed by The Duke of Cambridge.

Dan’s work has been exhibited extensively throughout the UK in both solo and group exhibitions in venues such as the Saatchi Gallery, The National Portrait Gallery, National Museum of Wales, Windsor Castle, MoMA Wales and others.

In 2014, Dan curated ‘Deaths and Entrances’ exhibition in Bloomsbury, London, celebrating the 100th birthday of the poet Dylan Thomas. A series of paintings responding to Dylan’s short stories accompanied by a comprehensive literary programme became one of the highlights of the centenary year.

In 2015, Dan was appointed the first ever artist-in-residence for the 68th Cannes Film Festival, where actors sat for portraits, and the sights and scenes of the area were depicted. This collection of work formed ‘Beyond the Red Carpet’ and exhibited in London.

Dan is currently working with Amnesty International on an extensive portraiture project. He lives and works in London.