A major new exhibition reassessing the career of the 20th century British Modern master David Bomberg has been announced by the Ben Uri Gallery.

Remarkable works never before exhibited in London. Works from major institutions including Arts Council England, Tate, The Fitzwilliam Museum, Pallant House Gallery and The Sainsbury Centre for the Visual Arts will be on show alongside works from important private collections and from Ben Uri’s extensive collection of Bomberg’s works.

A new monograph, the first for 30 years, by Ben Uri and Bomberg curators Rachel Dickson and Sarah MacDougall is now available in hard and softback. More than 40 works representing each significant periods of Bomberg’s oeuvre make up the exhibition.

David Bomberg (1890-1957) was born in Birmingham to Polish-Jewish immigrant parents. He spent his formative years in London’s East End among his fellow “Whitechapel Boys” which remains a principal focus of Ben Uri.

The influence of his early evening-class tutor Walter Sickert is reflected in Bomberg’s Bedroom Picture (1911-12, private collection) which was later re-worked as the Vorticist- influenced At the Window (1919, Ben Uri Collection). Both works are included in the exhibition and are an example of a pairing or re-working that is one of its major themes. 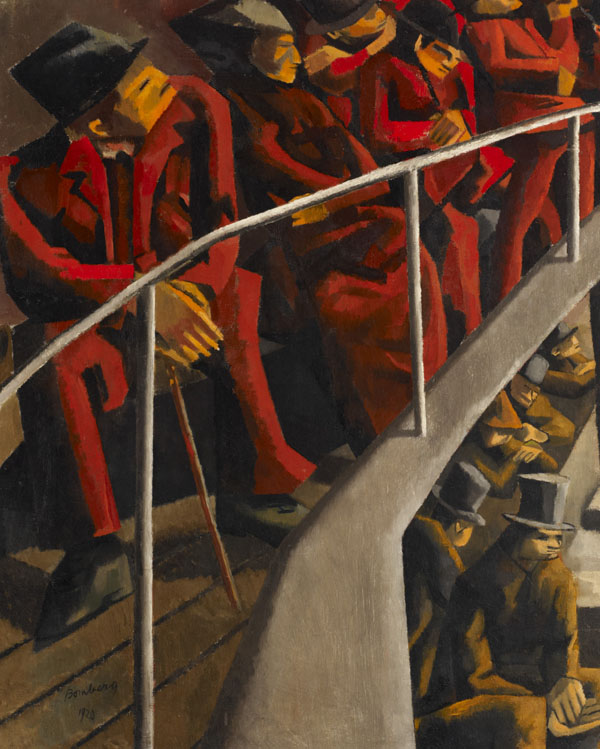 David Bomberg and Ben Uri histories have been intertwined since the museum was the first public institution to recognise the importance of his radical oeuvre and purchased his works initially in 1920 and regularly thereafter.

David Bomberg attended the Slade School of Art, as part of the so-called “Crisis of Brilliance” generation, Bomberg was regarded as a “disturbing influence”.

An early innovator with stylistic similarities to the English Vorticists, he established crucial contacts with the European avant-garde and, in 1914, co-curated with Jacob Epstein a “Jewish Section” in the exhibition “Twentieth- century Art: A Review of Modern Movements” at the Whitechapel Art Gallery. He held his first, critically acclaimed, solo show in London the same year.

In this period Bomberg sought a new and radical language to articulate his Jewish East End heritage and culture. They are expressed in early masterworks such as Ju-Jitsu (c. 1913, Tate), observed at his brother’s East End gym and reflecting the artist’s fractured experience as the son of Polish immigrants. The exhibition will show a rare study for this Ju-Jitsu courtesy of the Sainsbury Centre for the Visual Arts.

Bomberg’s harrowing service in the trenches during the First World War was compounded by a disastrous experience as a commissioned war artist (Study for Sappers at Work, 1918- 19, Tate); his post-war disillusionment was expressed in the masterly Ghetto Theatre (1920, Ben Uri Collection).

In 1923 Bomberg travelled to Jerusalem and, on expeditions to Jericho, Petra and the Wadi Kelt produced a series of detailed, realistic landscapes which evolved from a tightly topographical style into a looser, characteristically expressionistic style. This series heralded the painterly achievements of Bomberg’s final years, despite a series of disappointments including a difficult Second World War commission as a war artist.

Following his visit to Spain in 1929, a renewed vigour entered Bomberg’s work. This resulted in the fulfilment of the early promise in his maturity, particularly as a compelling, powerful creator of landscapes both in the UK and in Spain.

Sarah MacDougall (Head of Collections) and Rachel Dickson (Head of Curatorial Services) are joint senior curators at Ben Uri Gallery and Museum. Both the exhibition and publication follow on from Ben Uri’s ongoing series of exhibitions on the ‘Whitechapel Boys’ during the last decade.

Ben Uri’s collection reflects its close association with Bomberg, particularly in its early years, with works including Ghetto Theatre (1920) acquired directly from the artist as early as 1920. This will be the first full Bomberg exhibition for more than a decade (since Abbot Hall’s 2006 Spirit in the Mass).

Ben Uri Gallery and Museum was founded in 1915 in London’s East End and has followed a remarkable trajectory from Jewish émigré beginnings to mainstream art museum operating under the banner ‘Art, Identity and Migration’.

Ben Uri’s permanent collection ranges from late 19th-century painting to 21st century new media with by artists of primarily European Jewish descent, including Auerbach, Bomberg, Chagall, Gertler, Kossoff and Soutine. Since 2001 it has widened to embrace émigrés from all backgrounds and ethnicities. Today the collection numbers more than 1,300 works by more than 400 artists from almost 40 countries.