The first London retrospective exhibition of the innovative artist Sir Eduardo Paolozzi (1924-2005) has opened at the Whitechapel. Paolozzi was one of the most influential British artists of the 20th century. Considered one of the the ‘godfathers of Pop Art’. His powerful collages, sculptures and prints challenged artistic convention from the 1950s, ‘Geometry of Fear’ all the way through the Swinging Sixties and on to the advent of ‘Cool Britannia’ in the 1990s.

Paolozzi’s post-War bronzes and revolutionary screen prints, collages and bold textile designs are presented in this major retrospective which aims to reassess Paolozzi’s varied and experimental artistic approach, and highlight the relevance of his work for artists today. Spanning five decades and featuring more than 250 works from public and private collections the exhibition focuses on the artist’s radical explorations of material and form, processes and technologies, and consistent rejection of aesthetic convention throughout his career. Rarely exhibited drawings, maquettes and sculptures will shed new light on overlooked or lesser-known aspects of his work.

The exhibition is presented in four chronological sections and begins with Paolozzi’s groundbreaking early brutalist concrete sculptures including Seagull and Fish (1946), Fish (1946-7) and Blue Fisherman (1946) reunited for the first time since Paolozzi’s debut London exhibitions in 1947. Material from the artist’s influential performative lecture, Bunk! (1952) and examples of textile, fashion and design work including the highly patterned Horrockses Cocktail Dress (1953), are also on display. As an artist and textile design tutor practicing and teaching in post-war Europe, this first section demonstrates Paolozzi’s willingness to reject established artistic practices, expanding the traditional boundaries of art into the realm of popular culture.
Paolozzi continued to experiment with alternative mediums and processes throughout the 1960s, producing pivotal aluminium sculptures such as Diana as an Engine (1963) comprised of brightly coloured parts of machinery and enhanced by references to classical mythology. Highlights also include the four-metre wide Whitworth Tapestry (1967) displayed alongside print portfolios such as As is When (1964-5), demonstrating Paolozzi’s novel use of pattern, colour and everyday culture  across different media.
In 1974, Paolozzi was awarded a residency in West Berlin. Inspired by the music of composers, including Charles Ives, and with an interest in linguistics, Paolozzi converted the geometric shapes, modular approaches and rhythmic patterns produced during this active period into intricate reliefs, prints and sculptures, as seen in the series Calcium Light Night (1974-6). 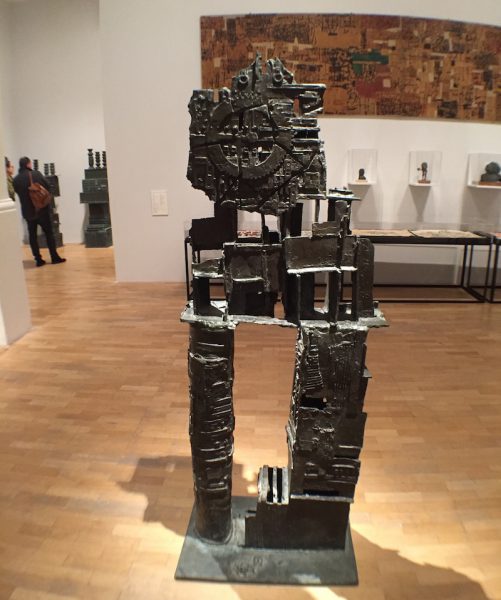 The artist’s innovative approach to exhibition display and curating as artistic strategy is demonstrated in an archival display of the celebrated 1986 exhibition at London’s Museum of Mankind, titled Lost Magic Kingdoms, one of the earliest interventions by a contemporary artist into a public museum collection.The exhibition closes by exploring Paolozzi’s work in the late 1980s to 90s with key sculptures that demonstrate the artist’s returning interest in figuration, as well as his subversive approach to conventional notions of the multiple art objects.

Eduardo Paolozzi (1924–2005) was one of Britain’s most influential post-war artists. Chosen to exhibit in the British Pavilion at the Venice Biennial in 1952, 1954, 1960, 1964 and 1968, and at the documenta in 1959, 1964, 1968, 1977 and decorated with a Knighthood in 1989, following his appointment as Her Majesty’s Sculptor in Ordinary for Scotland, Paolozzi received many national and international accolades; his works are collected in international institutions from the Tate in London to Berlin’s Nationalgalerie, to the Museum of Modern Art in New York. From an early point onward, Paolozzi played a significant role in art education, holding posts as Tutor for Textile Design at the Central School of Arts and Crafts in London from 1949 to 1955, as visiting Professor at the Hamburg Hochschule für Bildende Künste from 1960 to 1962, as Tutor for Ceramics at the Royal College of Art from 1968 to 1989 as well as Lecturer for Ceramics at the Fachhochschule Cologne from 1977 to 1981, and finally as Professor for Sculpture at the Academy of Arts in Munich from 1981 to 1991. A review by Edward Lucie-Smith will follow this preview