An exhibition of works celebrating the force and creative vision of El Anatsui, an artist who has had a tremendous impact on the international artistic landscape will mark the fortieth anniversary of the October Gallery’s founding.

El Anatsui: Material Wonder will coincide with the most extensive retrospective of the artist’s work to date, El Anatsui: Triumphant Scale, at the Haus der Kunst, in Munich. A significant new publication by Prestel will accompany this show. Moreover, in February 2019, TSIATSIA – searching for connection will be installed in the atrium of the Zeitz MOCAA, in Cape Town.

El Anatsui won the prestigious Charles Wollaston Award when this immense work first covered the façade of the Royal Academy, in 2013. El Anatsui is undoubtedly one of the most influential artists of the present time. Throughout his long career, El Anatsui has focused his many interests to examine a wide range of subjects. He has also explored an extraordinary variety of media from cement, ceramics and tropical hardwoods in his early years, to corrugated iron, cassava graters, milk-tin lids and aluminium bottle-tops in his later installations. Today, he is best known for these mesmerising works composed of many thousands of aluminium bottle tops laboriously sewn together. 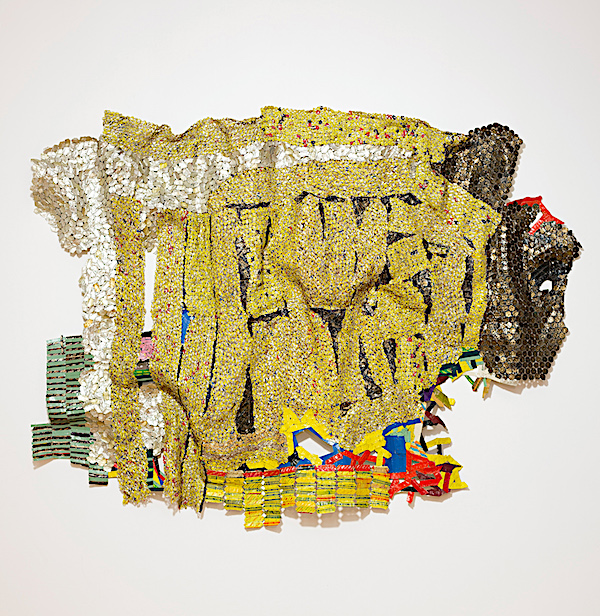 The triumphant success of these works owes much to the protean nature of the material itself, which being light and flexible yet robust, is capable of being repeatedly reshaped and re-formed. Speaking of the plastic qualities of his metallic composites, El Anatsui remembers: “I was playing with this idea of a ‘fabric’ as something that’s not fixed. The folds in the material have their own way of running – I don’t create them – they happen naturally, by themselves. The amazing thing about working with these ‘fabrics’ is that each time you display one of them – it becomes an entirely new work of art.”

The metal wall sculptures will also be accompanied by a series of prints made in collaboration with Factum Arte, Madrid. El Anatsui has always been fascinated by the physical history of the materials he uses and the journeys they undergo. The necessary materials for his ‘fabrics’ are made by a team of assistants, who cut and pierce the aluminium strips on tables and smaller wooden ‘flats.’ After years of repetitive pricking and piercing, these wooden worktops present a scored landscape of textured relief. Using Factum Arte’s cutting-edge, 3-D scanning and plate-making technologies, these scarred surfaces are translated into printing plates. Given Factum Arte’s expertise in traditional printmaking, the resulting prints encapsulate the hidden histories of the making of the aluminium works. The very fabrication process itself is thereby ‘recycled’ into a major new series of prints by El Anatsui.

In 2014, El Anatsui was made an Honorary Royal Academician and elected into the American Academy of Arts and Sciences. In 2015, he was awarded the Golden Lion for Lifetime Achievement at the 56th Venice Biennale – All the World’s Futures, and, in 2016, the University of Cape Town conferred an Honorary Doctorate upon him. In 2017, he was awarded the prestigious Praemium Imperiale Award for Sculpture. El Anatsui has been represented by October Gallery since 1993.