This exhibition comprises carefully selected works that reflect—with both humour and seriousness—our collective human experience during the global pandemic and lockdown. The exhibition touches on both the physical and psychological impact of isolation; it bears witness to our tentative emergence into a changed-world and also looks at how we too have been transformed.

As the world emerges from lockdown into changed streets, populated by people trying to remember how to interact with one another, we cannot help but look at ourselves in the mirror, both metaphorically and literally. What do we see? Yes, we see people bereaved, starved of human contact, putting on a brave face for the world, while uncertainty occupies their thoughts. We also see people who have rediscovered relationships, seen themselves in a new light, who have achieved clarity and a vision for the future, which they did not have before. We have found comfort, solace and inspiration in places that once may have surprised us. For better or for worse, all of us have emerged with a better understanding of ourselves. 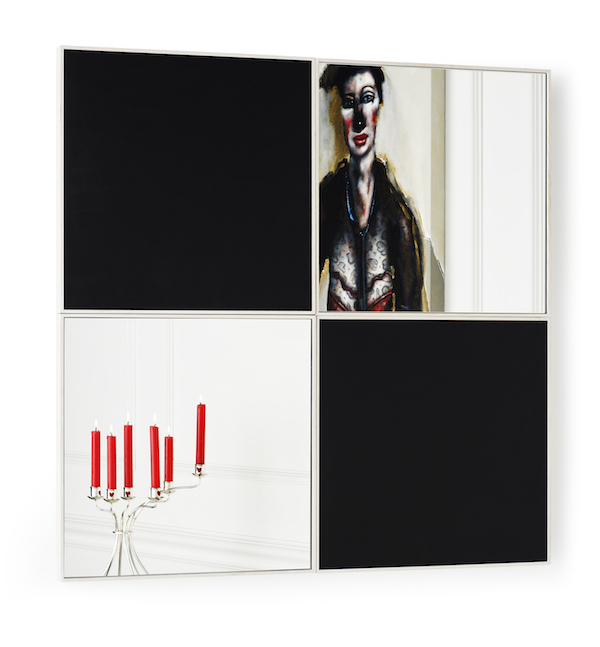 From Chris Gollon’s Still Life in Green – where the objects are reverting to atoms, a reminder of our hopes for scientific discovery and succour – to his newly self-professed Connoisseur and the Woman with a Curious Hairdo – characters and situations that may now be familiar to many of us. Terry Frost’s Claro De Reloj (Pause of the Clock) has the numerals on a clockface falling away, evoking a curious, timeless limbo that many of us have experienced during lockdown, as days and weeks lost meaning. Maxwell Doig’s Sunbather is an image of contented aloneness – social distancing at its best. Running through the exhibition, Gollon’s hugely empathetic paintings emphasise hope, which has kept humanity going through this crisis. In the history of still life painting, the candle traditionally symbolises hope, hence the inclusion of Paul Hatton’s stunning solid silver candelabra with its candles all lit. Gollon’s Orpheus and Eurydice is a reminder that although the world is returning to some normality and it is tempting to stop, turn around and embrace those whom we love, we must keep our eyes fixed on the path ahead and keep moving forward in order to protect the future.

Fine art and design continue to play an important role in our everyday lives. Julian Penberthy, an artist working in digital media, whose work prior to the pandemic might have been perceived as unpeopled, dreamlike scenes, strewn with familiar human ephemera; yet now, his imagery seems so prescient. They are transformed into images of lockdown: the empty halls, deserted streets, strewn with objects belonging to absent humanity. Possible Mirror also offers us transformation, blurring boundaries, merging fine art and design to create something new. These beautiful art-related mirrors literally reflect our own transformation, be it our curious new hairstyles, or the way we see ourselves, within the reassuring certainty of their meticulously thought-out and uplifting colour fields.

Chris Gollon (1953 – 2017) enjoyed many solo museum exhibitions, major public commissions and museum acquisitions, including the British Museum. ‘Humanity in Art’ the book on Gollon’s life and work by art historian Tamsin Pickeral (2010), was endorsed by Bill Bryson OBE. Gollon enjoyed artistic boundary crossing, in particular collaborations with musicians, including Thurston Moore, Yi Yao and Eleanor McEvoy, as documented in the recent museum retrospective of his music-related works Beyond the Horizon at Huddersfield Art Gallery earlier this year. His acclaimed site-specific Fourteen Stations of the Cross were permanently installed in the Grade I listed Church of St John on Bethnal Green, designed by Sir John Soane.

Sir Terry Frost RA (1915-2003) was a British painter and a member of the St. Ives School. Best known for his geometric abstractions formed of overlapping semi-circles, rectangles, and squares of bright colours, the artist’s work conveyed his enthusiasm for perceptual phenomena. Works are found in Tate Gallery London, Metropolitan Museum of Art in New York, and National Galleries of Scotland.

Paul Hatton (b. 1963) was born in East London, but his first major recognition came in Los Angeles. Having won all the major prizes offered by the Roman Ward Jewellery Institute in California, he was featured in the Los Angeles Times and began making jewellery for many Hollywood names, such as Jack Nicholson, Queen Latifa, Sugar Ray Leonard and Liv Tyler. He exhibited in the major exhibitions ‘Cutlery Art’ (1999)and ‘Love Story’ (2003) in Goldsmith’s Hall, London. He was recently commissioned to make the RIBA Stirling Prize for Architecture by the Royal Institute of British Architects, the most prestigious prize in British architecture.

Julian Penberthy (b. 1964 ) studied in Fine Art at the University for the Creative Arts, Surrey, where he developed his practice of making very innovative imagery using computer-generated image (CGI) 3D animation tools, and painstaking creation of models and scenes using a variety of source materials, as diverse as Andrea Pozzo’s Perspective in Architecture and Painting  from1693 to contemporary fast-food restaurants.  His work is receiving increasing critical attention, and has recently been shown in Discerning Eye, and twice at the Royal Academy Summer Exhibition.

Possible Mirror is an artist-designer with a studio based in the historic Spitalfields area of East London. A love of art from the Old Masters to contemporary painters and sculptors inspires the compositions. Most of the mirrors reference an artist, and to date, these include Max Bill, Brice Marden, Ellsworth Kelly, Donald Judd, Kazimir Malevich, Imi Knoebel, and Gene Davis. The mirrors are all hand-made with expert craftsmanship in the London studio. They are specifically designed for the homes of art lovers, with a view to complementing the paintings, sculptures, and prints they already have.