An exhibition of new works by the American figurative painter Eric Fischl will be unveiled at the London gallery Skarstedt in March. Presence of an Absence follows his exhibition Late America in New York in 2017. In this new body of work, set in domestic interiors and exteriors, there is a palpable sense of disconnect between an outward appearance of wealth and security and an inner sense of fear and longing for which there is no apparent cause. It will be interesting to see how these challenging subjects and images hold up in the age of #metoo.

“My paintings are only ‘about’ something when they’ve missed their mark. When they are successful, it is because they embody the ‘thing’ itself. They are not about realism, they are about reality…They always fall short of perfection in ways that attest to their authenticity”. – Eric Fischl

Following on from the exploration in Late America, at a time of political and social turmoil, of a society whose misplaced values gives rise to a lack of fulfillment, the paintings in Presence of an Absence continue to engage with this sense of detachment and with universal existential questions. 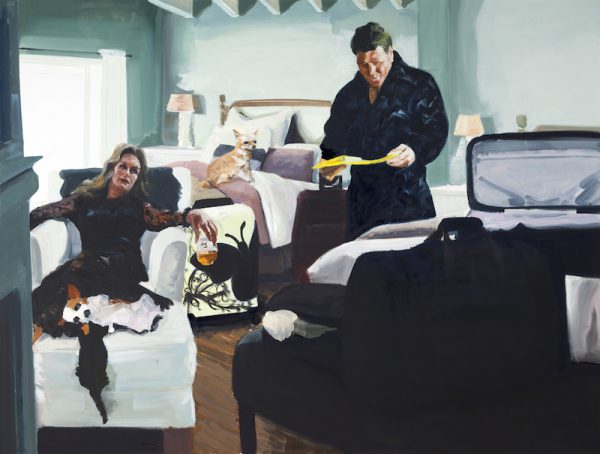 In some of the works, the figures are dressed in sombre clothing, perhaps coming or going to a funeral. In others, we witness scenes of intimacy that lack desire. Since the 1970s Fischl has been painting scenes of suburban life, conveying through paint what we fail to say in words. A collapse of communication has been prevalent throughout his work and here we see him again ask a series of questions such as “who are these people?” and “how are they connected?”. The lack of obvious answers is typical of his narrative style.

‘There are two kinds of painter, if you like…One is somebody like [Edward] Hopper who creates an image that burns on your retina and you never forget it. You can see it, walk away and still see it. [With] the other kind you are caught up in the authenticity of the energy. The believable moment. Jackson Pollock, you are right there with him. I am essentially the Hopper artist trying to create a frozen moment. The truth about how it actually was.’ (Eric Fischl, The Guardian, 2014).

Returning to the private moments and intimate themes that established his name in the 1980s, which he presents without judgement, we are left to draw our own conclusions from the scenes depicted. As ever, this body of work attests to the artist’s unique ability to capture the universal condition of our lives.

The exhibition will coincide with Running Wild: 80s Painting in America at the Arts Club from 27 February-19 May 2018, which features seminal early paintings by Eric Fischl alongside leading American painters David Salle and James Rosenquist. 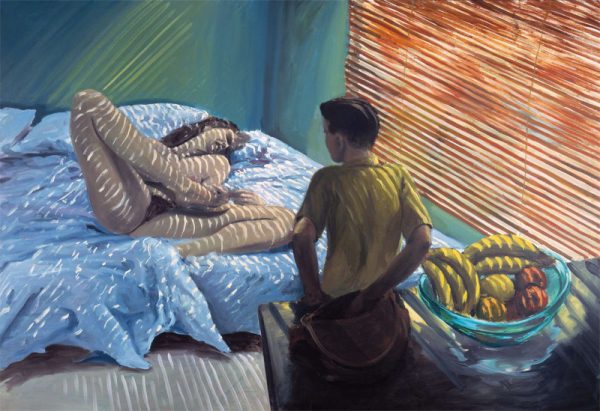 Eric Fischl was born in New York in 1948. He graduated from the California Institute of Arts in Valencia in 1972, and was a teacher between 1974 and 1978 at the Nova Scotia College of Art and Design in Halifax. Fischl had his first solo show, curated by Bruce W. Ferguson, at Dalhousie Art Gallery in Nova Scotia in 1975 before relocating to New York City in 1978.

Fischl has exhibited extensively throughout the United States and Europe. Recent solo exhibitions of his work have been held in international institutions including the Albertina, Vienna in 2014; the Centro de Arte Contemporáneo de Malaga in 2010; the Kestnergesellschaft, Hannover in 2007-2008; the Stadtkirche Darmstadt in 2006 and the Delaware Center of Contemporary Art in 2006. His work has also been included in exhibitions in major institutions such as The Metropolitan Museum of Art, New York; Musée Beaubourg, Paris; The Whitney Museum of American Art, New York and mostly recently in Unfinished Business: Paintings from the ’70s and ’80s by Ross Bleckner, Eric Fischl, and David Salle at the Parrish Museum, New York in 2016. Fischl’s work has been featured in over a thousand publications.

The artist is also the founder, President and lead curator for America: Now and Here. This multi- disciplinary exhibition of 150 of some of America’s most celebrated visual artists, musicians, poets, playwrights and filmmakers was designed to spark a national conversation about American identity through the arts. The project launched on May 5th, 2011 in Kansas City and travelled to Detroit and Chicago. The cross-country journey then continued in a roving museum and performance space contained within six 18-wheeler trucks that travelled to communities from coast to coast.

Focusing on contemporary European and American artists of the late twentieth century, Skarstedt is committed to mounting museum-quality exhibitions. Skarstedt London is located at 8 Bennet Street in the historic district of St James’s. The gallery moved to its new space in October 2016 following four successful years on Old Bond Street. The inaugural exhibition Cindy Sherman and David Salle: History Portraits and Tapestry Paintings has been followed by a programme of curated historical exhibitions, most recently de Kooning: Late Paintings.