Frances Richardson: Cross Lane Projects, Kendal, welcomes a major UK sculpture award as it is shown outside of London for the first time. Frances Richardson’s exhibition Not even nothing can be free of ghosts has been developed over the period of a year, as the 15th winner of Mark Tanner Sculpture Award.

Marking a significant development in her practice, the exhibition presents a group of new works referencing the image of water and water’s metaphorical use to suggest a state of mind. The artist is fascinated by the potential of things and places to hold information that is not explicit or measurable by traditional observation. With this new work, Richardson aims to provoke a visceral as well as an intellectual response in the viewer.

A key piece in the exhibition is Eidolon.  Eidolon is a Greek word for object and applies equally to an idea and a thing. The artist found a piece of chipboard on the street in Deptford, London, interested in its distinctive shape, Richardson explains: “I made a mirror image of the board in paper as a way of getting to know it – in making it out of another material, I’m measuring it with that material. The two sit together in a kind of Rorschach… a death moth …or are they wings?”

Such mirrorings are apparent in several works in the exhibition. The artist is interested in dualities and investigates a splitting between the sense one can get from being with an object or place and its measurable qualities.  In Split object, for example, the artist is considering the idea that an object can exist in a discontinuous space, that is, it can exist singularly in two places.

The title ‘Not even nothing can be free of ghosts’ is a quote from Karen Barad. Barad writes about measurements as agential practices, “the agencies of observation being inseparable from the observed”, in other words, how measuring is something we do in order to understand the world around us, but how and what we measure with exposes more than just the thing under investigation. 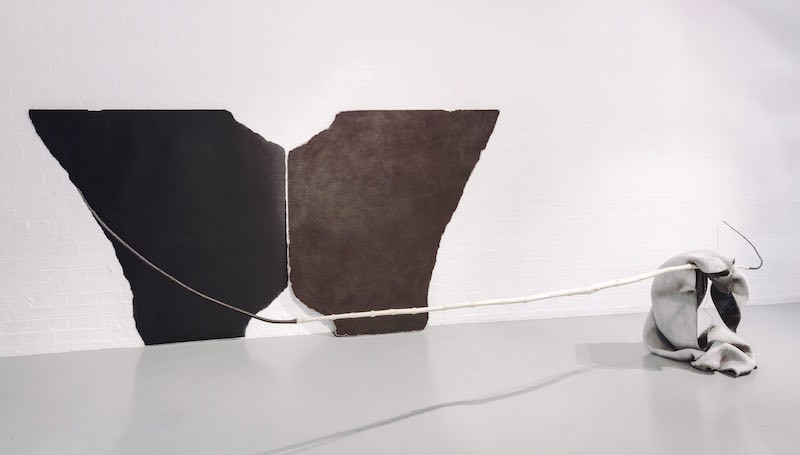 Richardson was born in Leeds, UK in 1965, receiving an MA in Fine Art Sculpture from the Royal College of Art, London in 2006.  She was nominated for the Max Mara Art Prize for Women 2015-17 in collaboration with Whitechapel Gallery. Richardson’s approach to sculpture draws out and exposes inherent properties in materials and the language of making. Using wood, veneer, video and copper for her new works, Richardson says “The material, and the way that you process the material is integral to the spirit and meaning of the piece”.

Drawing is also a central part to the artist’s practice; evident in this exhibition with the inclusion of A thought drawing, drawing of a thought.  In this drawing Richardson is interested in the conceptual nature of the drawing itself. The first drawing on the left is the act itself, and the second on the right is the reflective act, a drawing of the drawing. “The thought of the thought is never quite the same as the thought itself”.

Cross Lane Projects is proud to welcome the Mark Tanner Sculpture Award 2017/18 exhibition as a new initiative to share it with audiences across the north of England.  Coordinated by Standpoint Gallery, the Mark Tanner Sculpture Award is one of the most significant awards for emerging artists working in the field of sculpture in the UK.  Offering £8,000 towards the making of new work, it rewards outstanding and innovative practice, with a particular interest in work that demonstrates a commitment to process, or sensitivity to material.