Glenn Brown returns to his North East roots with a new show at the Laing in Newcastle. The internationally acclaimed artist has reimagined the Laing’s permanent collection alongside his own work.

Brown is one of the foremost exponents of oil painting today

Citing the medium itself as one of the main subjects of his work. Brown appropriates images changing their shape, form, colour, and dimension. He traverses artistic time zones from Renaissance, Baroque and Rococo through to Impressionism, Expressionism and Surrealism, referencing artists such as Jean Louis Fragonard, Salvador Dalí and John Martin – who was also born in the North East, and whose work features in the exhibition.

John Martin and Edwin Landseer (1802 – 1973) lead Brown’s new display at the Laing. These 19th century painters have had a tremendous influence on his practice, and these three artists now are being displayed together for the first time. Brown has also chosen works by other artists he admires, such as Frank Auerbach, Thomas Lawrence, Henry Raeburn, Walter Richard Sickert, Graham Sutherland, JMW Turner, but also less well-known names such as Mabel Greenberg, Dod Proctor and William Sayer. 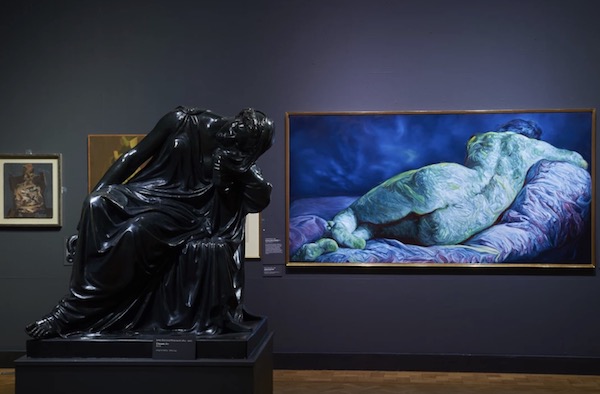 Glenn Brown: Fantasy Landscapes, Portraits and Beasts is on view at the Laing Art Gallery and forms part of the Art Trail for the Great Exhibition of the North – the UK’s most significant event of 2018.

This exhibition features some new works created by Brown including In the end we all succumb to the pull of the molten core, gifted to the Laing in 2017 as the first recipient of the Contemporary Art Society’s ‘Great Works’ scheme.

Glenn Brown states: “Curating the rehang of the permanent collection at the Laing has been an absolute pleasure, not only because the staff has been so helpful but because the collection is so good. Two artists will end up dominating the rehang: John Martin and Edwin Landseer. The Laing has quite a few of the greatest works by these two painters. Not only are they two of the most important artists of the 19th century, but they have had a tremendous influence on me. Over the past 25 years, I have made many works based on works by Martin and Landseer, some of which you will see in the exhibition.

“John Martin has had a huge cultural influence on science fiction and fantasy films, as well as science fiction art. In many ways, his paintings changed the way we all think and dream about the future. His way of coping with the rapidly changing landscape and the industrialisation of the North East of England was to create these sublime paintings. Many of them depict awe-inspiring and surreal views of the world, often describing God’s judgement of man’s misendeavours.

“Landseer, a contemporary of John Martin’s, had a very different way of dealing with the industrial revolution. He turned his back on modernity and became obsessed with nature. He painted animals, from dogs to deer to cattle, with a passion and skill that no other artist has come close to. To look into the eyes and to imagine running your hand over the hair/fur of the animals he depicted evokes such strong feelings of kinship and affection without being sentimental. I hope the conversation sparked by my art from the 21st Century alongside historic artworks is enlightening and sometimes humorous.”

Julie Milne, Chief Curator of Art Galleries, Tyne & Wear Archives & Museums, says: “We are absolutely delighted to be working with Glenn Brown who first and foremost is a great artist, born in the North East with a deep affection for the gallery. His work has a palpable relationship to the Laing collection through references to such artists as Martin, Auerbach and Landseer. Glenn is also a clear advocate of painting which is really important to a gallery such as the Laing who has an internationally renowned collection of paintings which is relevant and brings joy to so many people. To bring Glenn’s creative vision to reimaging the Laing collection alongside his own work is a unique opportunity making for a compelling and singular experience.”

Glenn Brown was born in nearby Hexham and is one of the most renowned British artists working today. Known for the use of art historical references in his paintings, Brown appropriates images changing their shape, form, colour, and dimension, traversing artistic time zones from the Renaissance, Baroque and Rococo through to Impressionism, Expressionism and Surrealism and referencing artists such as Jean Louis Fragonard, Salvador Dalí and John Martin – who was also born in the north east.