Glenn Brown’s first major exhibition in London since 2009 at Gagosian is one of the most highly anticipated exhibitions of the new year. We last saw a number of his works on the Gagosian stand at Frieze a few years back, so this will definitely give us all an opportunity to assess his latest work in a gallery context.

For Brown, one of Britain’s least hyped contemporary artists, the past and present are treasuries of raw material, offering countless images, titles, and techniques to be combined, appropriated, and deconstructed. Mining an extensive knowledge of art history, as well as of literature, music, and popular culture, Brown creates complex and sensuous works of art that are resolutely of our time. He remains an artist’s artist but this could all change.

‘I use pre-existing images to go into pre-existing frames. I don’t like a blank canvas or a blank sheet of paper’. —Glenn Brown

In Brown’s oil paintings, hybrid figures painted in intricate swirls reveal the sumptuous potential of oil paint. While these paintings give the illusion of corporeal volume and fullness, closer scrutiny reveals the surfaces to be smooth and flat. Painted flesh deliquesces, rots, and glows with a vital force. Rather than using paint to depict skin with observational exactitude, Brown shows the medium itself to be full of visceral life; translucent brushstrokes reveal the flesh, muscle, and sinew beneath the surface.

In Die Mutter des Künstlers [The Artist’s Mother] (2016), a female nude offers her hand, her finger dripping blood (presumably from a visible wound on her side) in a gesture that is both maternal and Christ-like, but with a sickly, accusative edge. Not only does Brown distort the proportions of the figure from Eugene Delacroix’s Nu Feminin assis (Mademoiselle Rose) (1820), he also removes the figure’s head, plunging the viewer into his own alternate reality. Bathing the painting in bluish tones (an evident nod to Picasso’s Blue Period), Brown asserts the history of art to be dynamic, not static. Another headless figure is visible in the gut-wrenching work titled Passchendaele (2017), in which an heroic male figure derived from another Delacroix work strides resolutely forward against a background of greens and yellows, colors that subvert the ideals of French Romanticism. 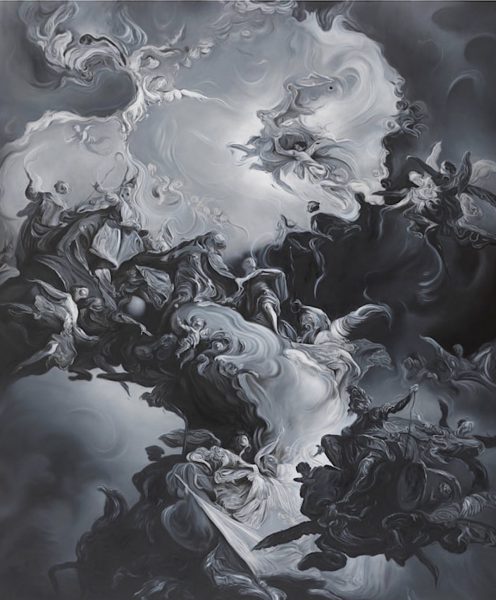 Glenn Brown: Let’s Make Love and Listen to Death from Above, 2017

Brown does not merely appropriate his source images, he fragments and infects them, introducing saturated hues that appear almost photo-luminescent. A series of new and grandiose grisaille panel paintings, based on small oil sketches and completely devoid of color, distort their subjects into grotesque parodies of altar paintings. In Music of the Mountains (2016), a graphic work on panel, Brown paints using only black and white lines over a neutral ground. Sharp, elongated strokes are layered meticulously and deliberately as Brown skillfully overlays and intermingles portrait heads from Raphael and Guido Reni to create depth and animation on a fused yet fractured entity that hovers between representation and dissolution, tranquility and unrest.

Brown’s choice of picture frames adds an additional layer to the richly layered visual anachronism. Inverting the normal order of image-making and framing, Brown treats the frames as readymades, creating drawings in response to the particular color, size, design, and narrative detail of each. Thus, the drawings and the frames are integral to each other. In the exhibition, an entire room of recent drawings is hung salon-style, some mounted in elaborate Renaissance gilt and carved wooden frames.

Brown’s sculptures are highly compelling, elaborate masses built from precisely
placed strokes of very thick oil paint. In some of them, the cold, sensuous curves of nineteenth-century bronze statues are still visible but engulfed by growths of pulsating, gravity-defying oil paint. The cold, hard metal contrasts with the soft, luscious paint. Ain’t No Flies on the Lamb of God (2017) is comprised of three truncated, upside-down feet, smothered in paint. Inspired by the motifs of painter Georg Baselitz, they are also an absurdist interpretation of the Crucifixion.

Merging the captivating and the uncanny, the beautiful and the repugnant, “Come to Dust” immerses the viewer in Brown’s enigmatic world. The figures and forms of history mutate and evanesce, overtaken by hypnotic terrains of color and suffused in delirious, otherworldly light. Harnessing and transforming the allure of Old Master paintings and drawings, then steeping it in reverence and profanity, Brown tells a much darker and more complicated story, fit for our times.

The exhibition will be accompanied by a fully illustrated catalogue that includes an essay by novelist Hari Kunzru.