A major new exhibition exploring the life and work of the artist Gluck (1895-1978), is now in full swing at the Brighton Museum. Gluck is widely recognised as a trailblazer of gender fluidity. The exhibition was created by Martin Pel, Dr Jeffrey Horsley and Prof Amy de la Haye.

Born Hannah Gluckstein into a wealthy Jewish family, Gluck attended art school in London and ran away to Cornwall with fellow students during the First World War.  The artist mixed with the Newlyn School of painters, and adopted the name Gluck, creating a controversial masculine identity incorporating men’s tailoring, barber-cut short hair and a mannish demeanour. 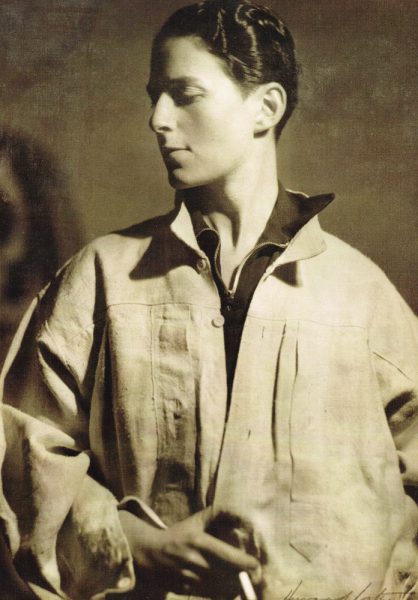 Gluck, who demanded “no prefix, suffix, or quotes”, became well known as a painter. Portraits, land and seascapes and floral paintings are all included in this show. Taking the experimental approach of a forensic investigation, the exhibition presents other surviving evidence of Gluck’s life – including clothing, accessories, photographs, press cuttings and personal ephemera.

To coincide with the exhibition ‘Gluck: Art and Identity’ at Brighton Museum, and the launch of an accompanying publication (‘Gluck: Art and Identity’, Yale University Press, 2017), LCF hosted a symposium of the book’s authors, yesterday, 07 February 2018 that analysed the modern British artist Gluck’s life, art and dress from biographical, curatorial, material culture and art historical perspectives. It explored an artist (1895-1978) who is now recognised as a role model in gender fluidity and identity, and a strong LGBTQ* presence in the UK socio-cultural scene of the 20th century.

The symposium’s themes included biographical methods surrounding narratives and histories of non-gender-binary lives; curating dress and ephemera of people who express sexual and gendered identities through art and fashion; and developing new research methodologies to enhance understanding, collaboration and social cohesion through the arts, curation, fashion and literature.

Taking the chapter they have written as a starting point, the speakers explored the presentation of the lives of people choosing to dress in non-gender-binary fashions. Gluck’s life was presented as a case study to be explored by fashion theorist Elizabeth Wilson (LCF), Gluck biographer Diana Souhami, Sociologist Gill Clarke (Otter Gallery, University of Chichester), art historian Simon Martin (Pallant House Gallery), curator Martin Pel (Brighton Museum) and LCF’s Jeffrey Horsley and Amy de la Haye. The Drakes, a group of butches, transmen and gender rebels, presented a dialogue based on oral histories on these themes.

Hannah “Gluck” Gluckstein was the niece to the brothers who had founded J. Lyons and Co., the British coffee house and catering empire. Her American mother, Francesca Halle, was an opera singer. To the exasperation of her family, Hannah pursued an artistic training at the St John’s Wood School of Art (1913-16). Later, when she came of age at twenty-one and gained access to her trust fund, the young woman had the means to pursue an independent life. She traveled to Lamorna, a fishing village and cove in west Cornwall where the Newlyn School artists colony was based, and bought her own studio. By 1918, she had begun to call herself Gluck (‘no prefix, suffix, or quotes”), had adopted men’s clothing, cropped her hair, and begun to smoke a pipe. The seriousness by which Gluck insisted on others addressing her only by her contracted surname was such that when an art society of which she was vice-president listed her as ‘Miss Gluck’ on the letterhead, she resigned.

The Newlyn School had been led by artists Stanhope Forbes and Frank Bramley, who settled there in the early 1880s. It was reminiscent in spirit to the Barbizon School in France, which was established by the artists who had fled Paris in search of a purer, more natural light – to paint en plein air. Newlyn, like nearby St Ives, appealed to artists for the cheap living and the availability of models, in addition to the remarkable scenery, light quality, and attractively simple life. Gluck herself never identified with any particular school or movement, and only showed her work in solo exhibitions. In the 1920s and 30s Gluck gained recognition for portraits and flower paintings; perhaps her best known work is of stylized flower pieces inspired by the floral creations of Constance Spry, an early companion and lover.

The ‘Gluck Frame’ was exhibited at British Art in Industry exhibitions and became an integral part of Modernist and Art Deco interiors of the 1930s. Each one arises from the wall in three tiers, painted or papered to match the wall where it is hung, to give the illusion that the painting is part of the architecture of the room. When, in 1932, Spry decorated the Fine Art Society galleries for Gluck’s third exhibition, the walls were paneled in white, modern furniture was added, and each room featured Spry’s floral arrangements. All the paintings were hung in a ‘Gluck frame’ very similar to the one here.