In the sometimes fraught and fractious relationship between the Church and visual art, the story of Sister Corita Kent is one of the most inspiring, surprising and unusual.

In 1936 the eighteen-year-old Frances Kent entered the religious order Immaculate Heart of Mary order of Catholic nuns in Hollywood. She became Sister Mary Corita, IHM, and revelled in the changing urban environment of post-World War II Los Angeles finding inspiration in signs and advertising for her vibrant screen-printed banners and posters. As early as 1952 her printmaking was recognised as best in show by the Los Angeles County Museum of Art, but it was a visit in 1962 to the Ferus Gallery in LA to see Andy Warhol’s breakthrough exhibition of Campbell’s Soup Cans that transformed her practice.  ‘Coming home,’ she said, ‘you saw everything like Andy Warhol’. 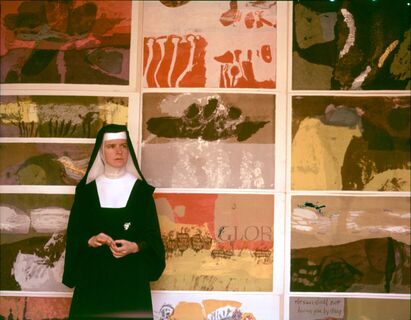 From that point on, she drew playfully on pop and modern consumer cultures in a unique calligraphic style that incorporated advertising images and slogans, popular song lyrics, biblical verses, and literature and addressed contemporary issues of poverty, racism and war by asking, ‘What would Jesus do?’ Her bright, bold work frequently appeared on the streets surrounding the Immaculate Heart College in a subversive homage to mass media, deconstructing the slogans of consumerism from a heart of love.

Teaching in and then heading up the art department at Immaculate Heart College, she emphasised the importance of observing the everyday, addressing society’s ills, and art as a bridge for human connectedness. Her approach was summed up in the Immaculate Heart Art College Department Rules which stated:

RULE ONE: Find a place you trust, and then try trusting it for a while.

RULE THREE: General duties of a teacher — pull everything out of your students.

RULE FOUR: Consider everything an experiment.

RULE SIX: Nothing is a mistake. There’s no win and no fail, there’s only make.

RULE SEVEN: The only rule is work. If you work it will lead to something. It’s the people who do all of the work all of the time who eventually catch on to things.

RULE NINE: Be happy whenever you can manage it. Enjoy yourself. It’s lighter than you think.

RULE TEN: “We’re breaking all the rules. Even our own rules. And how do we do that? By leaving plenty of room for X quantities.” (John Cage)

HINTS: Always be around. Come or go to everything. Always go to classes. Read anything you can get your hands on. Look at movies carefully, often. Save everything — it might come in handy later.

By 1967 she was on the cover of Newsweek but was encountering opposition from within the church particularly from the Archbishop of Los Angeles, Cardinal James Francis McIntyre, who found her prints offensive. In 1968 she left the order and moved to Boston where she continued as an advocate for social justice and the democratisation of art, producing, in a somewhat sparser style, screen-printed posters and banners incorporating profound messages with stunning aesthetic and spiritual effects. In 1985, the U.S. Postal Service commissioned her to design the Love Stamp, which sold more than 700 million copies, perhaps the most popular postage stamp ever issued. At the time of her death in 1986, she had created almost 800 serigraph editions, thousands of watercolours, and innumerable public and private commissions. She bequeathed her complete collection of prints to what is now UCLA’s Hammer Museum.

The ground-breaking work of Corita Kent is coming to Ditchling Museum of Art + Craft this summer in an exhibition entitled Corita Kent: Get With The Action from 5 May 2018 – 14 October 2018. To accompany the exhibition, the Museum has invited leading international designer Morag Myerscough and Luke Morgan to take over their Wunderkammer in a surprise visual display. The installation will sit alongside their interactive kinetic installation Sign Machine (2016), which invites visitors to sit on a swing structure that in turn revolves signs and objects adorning its crown.

Myerscough says she has discovered a kindred spirit in Corita’s work and spirit: ‘I feel a deep connection to Corita’s approach as she is about being REAL. Corita insists that ‘creativity is based on close observation of the ordinary’. I know I often have to dig deep and start appreciating the small things around me, what are the things that really make you happy, it does not have to be about fame and fortune but about love, friendship and working together to make things better. Corita taught her students how to keep ‘their eyes and minds open’ which is so essential to continue doing relevant work at any age that can connect to the world around us and make a difference.’

Corita Kent: Get With The Action is featured as part of the Brighton Festival programme throughout May and beyond. The programme also includes an exciting project co-commissioned by Brighton Festival and Ditchling Museum of Art + Craft: Belonging is a community partnership that will see a mobile bandstand created by Morag Myerscough touring Sussex throughout the summer.

In recent years, Corita has gained increased recognition for her role in the Pop Art movement. Critics and theorists previously failed to count her work as part of any mainstream “canon,” but in the last few years there has been a resurgence of attention given to Kent. As both a nun and a woman making art in the twentieth century, she was in many ways cast to the margins of the different movements she was a part of. Corita’s art was her activism, and her spiritually-informed social commentary promoted love and tolerance.

Read more by this writer