The exhibition comprises 16 paintings and two works on paper. Lubberland takes the Swedish name for ‘Cockaigne,’ a land of plenty in medieval myth, and was first made famous in the broadside ballad “An Invitation to Lubberland,” first printed in 1685. With ‘Lazy Land’ an approximate translation, the exhibition’s title sets out its themes – presenting a bold yearning for an idyllic world of ease, abundance and human connection.

Taking combined inspiration from such masterpieces as Bruegel’s The Land of Cockaigne, Hieronymus Bosch’s The Garden of Earthly Delights, Matisse’s Bonheur de Vivre, Rüdham’s paintings are crowded with intersecting figures, stylised as floating or falling silhouettes repeated across each brightly textured scene. As in Dante’s Divine Comedy, in Lubberland Rüdham offers a sense of joyful optimism but also foreboding – set amid the context of a soul’s journey down to Hell and back to Heaven. Paintings such as Lemon Curd and Strawberry Jam are luscious and thronging, bursting with figures that flow like the wine in those medieval streams of fantasy. 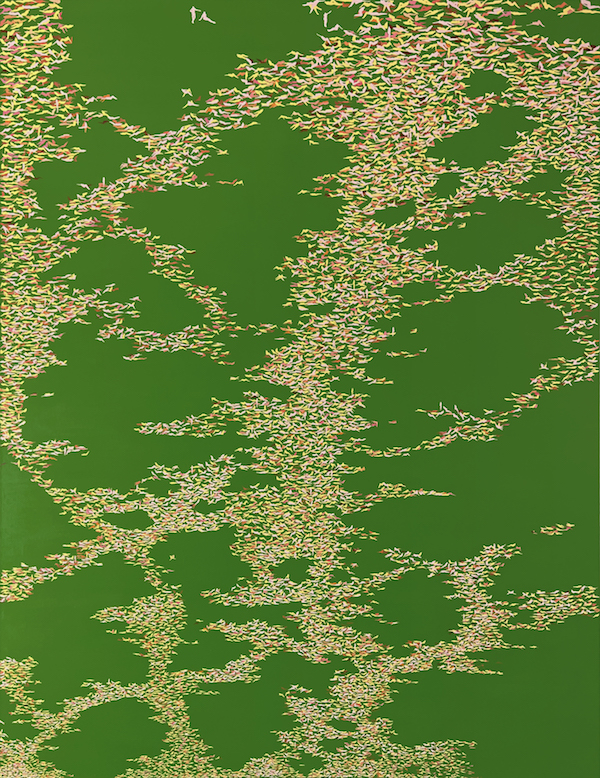 Alongside Old Masters, Rüdham has long been inspired by the colour studies of the Bauhaus artists, concerned with the interactions of colour. In these new works, however, he has become increasingly focused on patterning ideas, with key influences including Anni and Josef Albers. Maintaining his signature bold palette, these paintings shift towards a more maximalist style, appearing simplistic but with a focused perspective intensified through spherical or oval compositions – becoming portals within abstracted worlds.

Meticulous and painstaking, Rüdham’s complex paintings are composed of many strata – layer upon layer of reverse cutouts. By hand-cutting each figure individually using tape, thousands of figures are created, intersecting and overlapping through a lengthy, intricate process. From afar, the figures are barely distinguishable, seeming like an abstract design, forcing perspective into the centre of the composition. Close up, each form reveals itself, emerging as though embossed upon the surface.

Lubberland also sees the artist present two works from his new ‘Cotton Candy’ series. A departure from Rüdham’s central painting practice, these skyscapes take inspiration from Hockney’s paper experiments. They are created by blending paper, dying the cotton with pure pigment and pressing the strands back together. Soft and dreamlike, the skies take on a tactile aesthetic, celebrating the medium’s materiality.
‘Lubberland’ by Harry Rüdham runs at Grove Square Galleries from 17 February to 2 April 2022. For more information, visit www.grovesquaregalleries.com
London-based artist Harry Rüdham (b. 1996) graduated with a First in BA Fine Art in 2019 from Central Saint Martins, where his studies also included a year at the Universität der Künste in Berlin. His distinctive style fuses the classical motif of the reclining figure with a strikingly abstract approach.

Inspired by the fantastical scenes of Old Masters such as Pieter Bruegel and Hieronymus Bosch alongside Bauhaus artists’ abstract colour studies, Rüdham’s paintings fuse their theories into a contemporary context. His paintings are crowded with intersecting figures, stylised as floating or falling silhouettes repeated across brightly textured scenes, focusing on forced perspective achieved through scale and pattern. Presenting a yearning for an idyll of abundance and ease, the works also suggest an intense and palpable desire for human connection at a time of uncertainty, unrest and solitude.

Rüdham’s work has featured in numerous group exhibitions in the UK and Germany, including the Venco Gallery Edition iii Exhibition, Berlin (2018) and Young Contemporaries, London (2019), which he also curated. In 2020 Rüdham was the subject of a solo online exhibition with Julia Campbell Carter. In addition, he initiated the residency, ‘Sit Down, Has a Corona,’ to support artists during the global pandemic.