The sculptor, Helaine Blumenfeld OBE, has spent a life time unashamedly in pursuit of beauty. In an art world obsessed by the conceptual, Blumenfeld has carved her own reality.

“In such ugly times, the only true protest is beauty” – Phil Ochs

Her work is centred around large-scale abstract and figurative pieces as documented in a new film featuring ‘Tree of Life: Encounter’ for the Woolf Institute. The viewer follows Blumenfeld’s creative journey in the making of the 10ft high sculpture. From conception to clay maquette, the choosing of the marble and carving, to finally the installation at the Woolf Institute’s new headquarters at Westminster College, Cambridge in February 2018.

The film, directed by award-winning film-maker, Rupert Edwards, will be shown on Sky Arts on Wednesday 18 April at 10 pm. A fascinating and mesmerising insight into the secret life of one of the most successful female sculptors of her generation.
The start of the film shows a group of teenage children reacting to Blumenfeld’s abstract/ figurative work. They simply want to hug and caress the curvaceous forms. The children enthuse about how ephemeral and sensual the work is, how beautiful and pure. 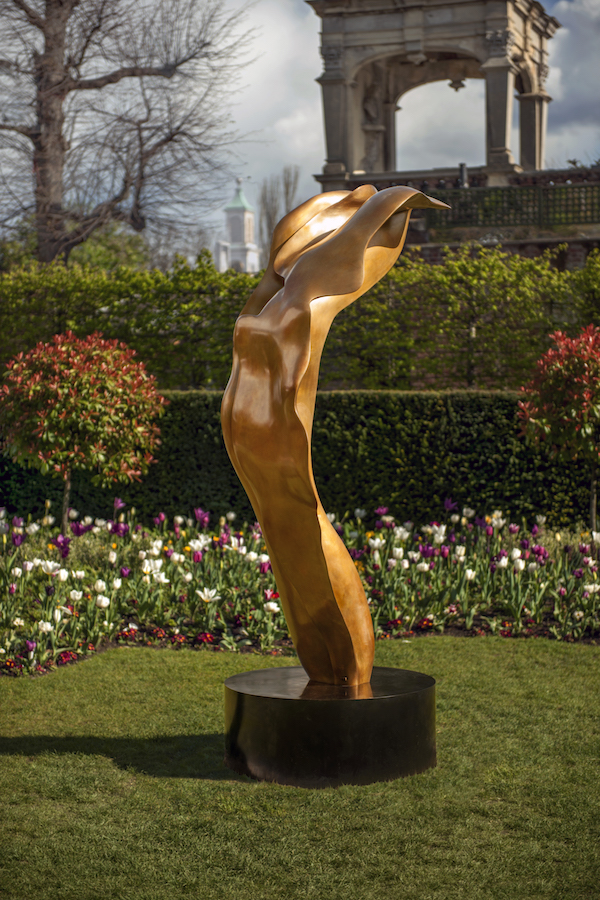 Their often monumental scale is given over to a seductive other-worldly transcendence installing a trance-like state, a meditation on beauty, an opus to peace.

Blumenfeld describes how her inspiration is derived from dreams, she dreams in form and objects. When asked to describe what she has dreamt she says that it took her a long time to realise it was impossible to do so in words. She translates her dreams into visual feelings a tangible fluid-poetry of form, into silent monumental sculpture.

Working for over fifty years in a mostly male-dominated field, Blumenfeld was fearless in her quest for beauty. She would often sneak away from her home in Cambridge (leaving her partner to take care of their two sons) and travel to her studio in Italy to work.

In many senses, Blumenfeld epitomises the modern woman. Even in later life she remains inspired, courageous, driven and single-minded in her pursuit of raw creative expression. Throughout the film we see a Blumenfeld who is true to her art and herself, the sculptures she makes are honest and free, untethered by convention yet highly skilled in execution; they are portals to other dimensions, other states of being.

This wonderful film is a testament to what can be achieved in life with talent, hard work and determination. Blumenfeld is a force of nature, not a hurricane but more a warm breeze after the rain.
In her own words “Art is a commitment to risk, a reflection of life – nothing stays the same…”

Blumenfeld was vice-president of the Royal British Society of Sculptors, in 2007 she won the Premio Pietrasanta nel Mondo and received an honorary OBE in 2011.

Timothy Potts, Director, Getty Museum, who features in the film says: “It’s quite remarkable that Helaine Blumenfeld, at this stage in her life, is enjoying so much success with new commissions and recognition from major museums, collectors and public institutions. Many artists have successful mid-life careers, but their future doesn’t always look as exciting as what’s come before them. Helaine has avoided that pitfall by continuing to evolve in her artistry; what she’s creating now is more ambitious and complex than ever before. I am sure that Helaine’s work will survive the test of time and she will have a place in 20th and 21st-century history.”

Hard Beauty, the first film about the life and work of sculptor Helaine Blumenfeld, OBE, will premiere on Sky Arts on Wednesday 18 April at 10pm.