This major exhibition will unite all of the paintings and engravings in Hogarth’s Place and Progress series for the first time displayed across the Georgian backdrop of Sir John Soane’s Museum. Through these works, the exhibition will explore the artist’s complicated stance on morality, society, and the city, and the enduring appeal of his satires.

The exhibition explores the artist’s complex stance on morality, society, and the city, and the enduring appeal of his satires. In contrast to the positive connotations which the concept of progress has today, Hogarth’s complex and often darkly satirical narratives move from social ostracism, to poverty, madness and death. The concept of progress has positive connotations in the twenty-first century but was often construed negatively in Hogarth’s time.

Hogarth’s ability to see beyond social conventions continues to resonate with 21st-century audiences, as he presented with wit and empathy the depictions of immorality and vice that he perceived in all classes of society.

Marriage A-laMode will join the Soane Museum’s own Rake’s Progress and An Election from the National Gallery, the Four Times of Day from the National Trust and The Trustees of the Grimsthorpe and Drummond Castle Trust, as well as the three surviving paintings of The Happy Marriage from Tate and the Royal Cornwall Museum. The exhibition will also include engraved series of prints, lent by Andrew Edmunds, such as The Four Stages of Cruelty, Industry and Idleness and Gin Lane and Beer Street. The works span Hogarth’s career as an engraver and painter, and the exhibition will explore Hogarth’s increasing skill – or progress – in both fields, culminating in the skilful execution of An Election. 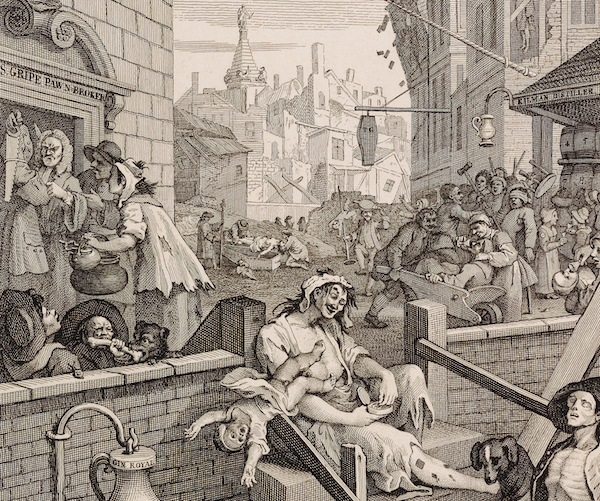 Hogarth’s concept of ‘progress’ was influenced by John Bunyan’s The Pilgrim’s Progress, where the word described a journey towards moral and spiritual redemption through dismal places: from the City of Destruction to the Slough of Despond and Valley of Humiliation. Hogarth: Place and Progress will explore how Hogarth’s series depicts this idea. Hogarth’s narratives move from moral abandon and social ostracism to poverty, madness and death and are often presented as highlighting the follies of the upper classes.

The exhibition will also examine the idea that Hogarth was not merely ‘the people’s champion,’ but increasingly his narrative series perceived immorality and impropriety at all levels of society. Those most likely to be safe from Hogarth’s satirical wit were those who knew their ‘place’ in the social order and lived up to the positive ideals of their class, high and low alike.

Hogarth’s self-titled ‘Modern Moral Subjects’ present detailed characters, plots and changes of scene, set in specific and recognisable locations. The idea of spiritual progress is shown through visible representations of London life; The essential geographic contrast is between the City of London, with its winding alleys and crumbling houses, livery guilds, the Mansion House and Monument, associated with merchants, and the West End where the landed aristocracy live in spacious and orderly squares, physically nearer to the royal place of St James. Between the two, the area around Covent Garden is repeatedly presented as a hotbed of immorality. In A Rake’s Progress, the Rake moves from the City of London to an extravagant property in the West End, then a brothel in Covent Garden, and ultimately travels outside the City walls, ending up in Bedlam, where his dissolute life has led him to insanity and death.

The exhibition will demonstrate how Hogarth’s ‘Modern Moral Subjects’ married the idea of progress with the moral geography of London, in a dynamic and evolving way throughout his own development as an artist.