A retrospective exhibition of works by the London based artist Hugh Mendes is taking place at The Truman Brewery in Brick Lane. Charlie Smith London, along with the artist, has compiled over 100 paintings spanning 20 years of work, the exhibition will provide a fascinating overview of Mendes’ career. Mendes is known for political and obituary paintings, where he adopts the visual language of newspapers and renders in trompe l’oeil.

20 years later, to mark the anniversary of 9/11 and my graduation, I am returning to Brick Lane – HM

The day of 9/11 in 2001 was a significant one for Mendes, the events of which came to fundamentally inform his practice. Timed to coincide with the 20th anniversary of that fateful day, Mendes will also conduct a ‘Meditation for Peace’ at 2pm on September 11th. In his own words:

“In the summer of 2001, I was studying for my M.A. in Fine Art at City & Guilds of London Art School. In my studio, I was incorporating newspaper clippings into still life paintings. I was working on a memorial piece to mark the 20th anniversary of John Lennon being shot in New York: ’20 Years Ago Today. It juxtaposed a painted newspaper clipping with another object, in this case, a green apple, relating to Apple Records. 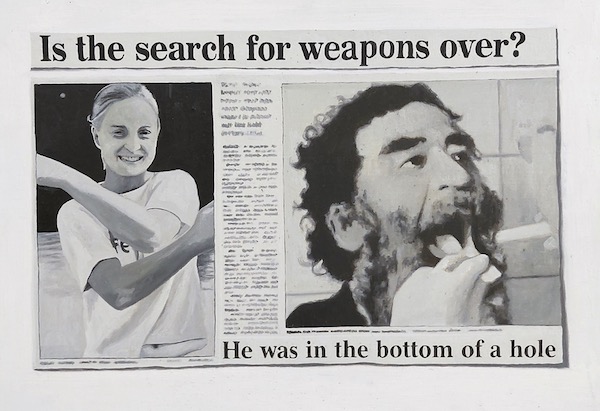 That summer, I was also following the contested U.S. election between Al Gore and George W. Bush. They were recounting endlessly in Florida and arguing over ‘hanging chads’. Eventually, they fraudulently declared Bush as the winner. Walking down Brick Lane one afternoon, I spotted a piece of newspaper on the pavement, featuring an image of an Arab with a Kalashnikov gun and some Arabic looking text. Back in the studio, I juxtaposed this clipping with an image of Al Gore and George Bush: ‘Gore Really did Win Florida’.

I hung both of these paintings in my M.A. graduation show, which opened on September 11th. That afternoon, while my show was being marked, I idly turned on the T.V. at home, to see the second plane flying into the Twin Towers in New York…All hell broke out.

The next day, that same image of the Arab with a gun was in all the newspapers as it was the relatively unknown Osama Bin Laden. It was a chilling coincidence.

I found myself propelled into making multiple paintings relating to 9/11, the ensuing ‘War on Terror, and the wars in Afghanistan and Iraq. My first solo show, post M.A., featured 20 of these paintings and was called ‘Into Manhattan’s Memory’.

Now, 20 years later, to mark the anniversary of 9/11 and my graduation, I am returning to Brick Lane with CHARLIE SMITH LONDON to present a retrospective including over 100 paintings.

During the last 20 years, my work has continued to follow global political events, while increasingly focusing on obituaries, and especially those of artists. They epitomise a particular way of recording history through the lives of individuals. But all referencing the world as viewed through newsprint, and subsequently through the painted image. This has led me to reflect on history through the lives of artists and to meditate on the artist’s role in society. This necessarily includes my role as an artist and my place in a long and glorious lineage.

My artist obituary paintings have included many of my teachers, as well as mentors. The most recent development has been using and remaking the self-portraits of many of these artists as invented obituaries in a newspaper format¬—as if Rembrandt had an obituary in ‘The Guardian’ newspaper. It has been a particularly fascinating process to consider the styles and techniques of so many artists, as well as reconsidering how they viewed themselves. 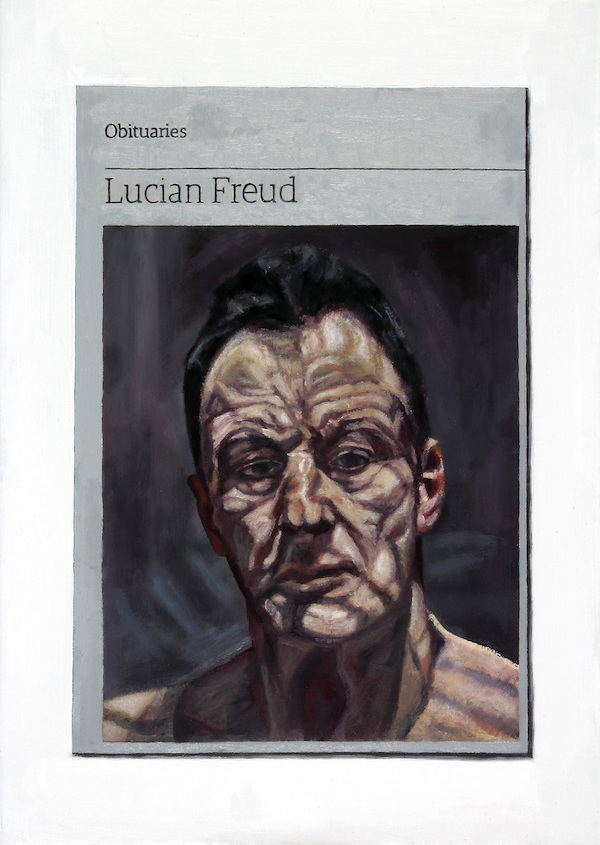 Ten years ago, I made a work on paper, where I wrote out in pencil all 3,000 names of the people who died on 9/11. This piece is now part of the Sammlung Annette und Peter Nobel in Zurich. Writing out the names took six weeks at about 6 hours per day, every day, and 75 names per day¬—it was perhaps the most meditative piece of work I have made.

As part of this exhibition, on the actual 20-year anniversary day of Saturday, September 11th 2021, I will hold a memorial event where I will conduct a ‘Meditation for Peace’, available to join via Zoom and in association with the nearby London Buddhist Centre. I have taught meditation there for many of the last 20 years and continue to do so. It will also be linked to Townsend Gallery in New York and local Buddhist groups there. I will also read out the names of people who died on that day for 11 minutes, echoing similar events which take place in New York every year to pay respect, as well as to reflect.

We are currently in somewhat unprecedented times, facing ongoing wars, a refugee crisis, potentially catastrophic climate change and a global pandemic. I hope this retrospective exhibition and event will provide an opportunity to think about global developments over the last 20 years and to reflect on our roles within it.”

PLEASE NOTE: NO MORE THAN 30 GUESTS WILL BE INVITED TO ATTEND THE PREVIEW AT ANY ONE TIME IN 1 HOUR TIME INTERVALS. WE POLITELY REQUEST ALL ATTENDEES WEAR FACE COVERING AND MAINTAIN SOCIAL DISTANCING. PLEASE EMAIL DIRECT@CHARLIESMITHLONDON.COM TO BOOK.

DURING PUBLIC HOURS BOOKING IS ADVISED BUT NOT ESSENTIAL. WE POLITELY REQUEST ALL ATTENDEES WEAR FACE COVERING AND MAINTAIN SOCIAL DISTANCING.