‘My way of working, the core of all my sculpture, is a theme, the soul of the piece.”

This is the first solo exhibition in the UK by the Californian artist J. B. Blunk (1926-2002). It comprises 40 ceramics, no wood, but the unity of his practice stands across wood, stone and clay, which is his search for the essential character of the material and to express this through form.

The hand of the artist, the eye of Blunk has revealed these shapes. The forms are made by him. They are not natural processes unless he himself is a natural process. To be fair, he does try to be one by listening and responding to the material with his emotional, aesthetic core. It’s a finely balanced act. His intervention is strong and so fundamentally human. Wielding a chainsaw, pushing the hard, dramatic clay, digging it from the earth, that record of a single human he is a woodsman, a craftsman, a mountain man of California, taking on the immediate natural world and bringing it into domestic human artefact, large scale. But still, he makes on a human domestic scale. 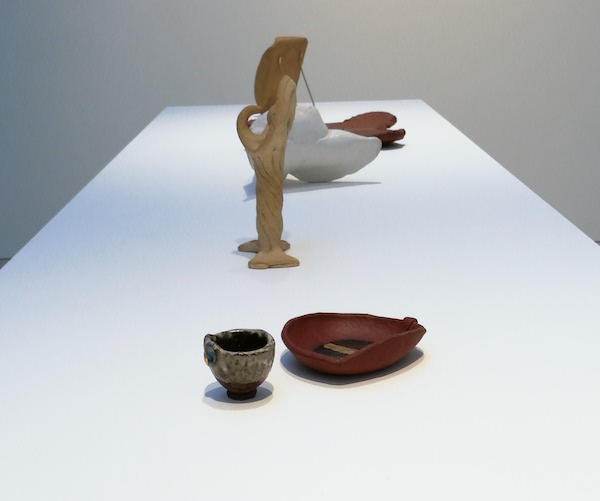 I use the present tense, but Blunk is of the generation of forged when some artists, called by some inner drive, took to the hills, left the city and hacked out an alternative to urban living. His work comes from the lonesome cabin in the hills. Kate MacGarry and friend tell me I must look up the ‘Blunk House’, his cabin, self-built in the Inverness hills between 1959 and 1962, made entirely from materials garnered locally, huge woods carved using minimal tools; chainsaw, grinder and chisel.

I research the house on the internet. It is small. High. It’s built on a wooded ridge that overlooks the wide blue Tomales Bay. The trees and the mist surround the simple low cabin. The wetness and lichen, moss and bracken are knocking at the door in a modernist fairytale. It’s a made house rather than a designed house. Created by one bloody-minded artist.

But at Kate MacGarry’s white gallery, here on the edge of the Boundary Estate in London, I can see the ceramics close up. Arranged through the room simply I feel them crackling with the earth inside. I feel a sense of electricity, of power and subterranean molecules. It’s dark and deep, and there is a sense of how they have been dragged up from their sleeping homes and reshaped into unnatural poses, but allowing their fundamental nature to still display themselves.

Some of the clay is rough terracotta stoneware in thick slabs. Others are off white, smoother with pastry-style pressings into the edges. They hang on the wall, simply, monumentally, a twentieth-century hymn to the environment and a testament to the earth, to what is important. It is a modern religion, these are religious items of a kind that I recognised, divorced from traditional forms of ceremony but evoking respect and revealing intense aesthetic and visceral knowledge of a patch of land.

The gold circles and stripes pick out visual moments, crowning the objects like a halo or shining a torch on the deep veins underground. The thick rugged slabs are outlined, drawn simply and definitely in dark, thick gloopy glaze. Crosses of glaze cross the terracotta stoneware, revealing the folds of its natural slump as the pieces of earth have flumped on the board. Round shapes echo the choice of the circle of ancient religion. I’m thinking of the stone circles in Scotland, my personal homeland. There are globes too, a gold globe on a gold plate. I couldn’t tell you why, but I feel his choices are honest. Also, they feel nurturing. Friendly. In a way they are monumental, yet they are for humans to live with, not to shock them with awe.

Kate MacGarry’s exhibition has allowed me to become a fan. I could have come across Blunk on the internet and would have been impressed. Then I would have flicked onto the work of another artist, googled the ceramicists of San Francisco, educated myself. But by seeing these works here in my backyard, I am able to feel a connection to him I would never have achieved through screen exposure.

I wish there were more pottery classes still in London, more community opportunities for people to expose their fingers and eyes to clay itself. But this is worth seeing for anyone wanting to be inspired to work with clay and glazes. It does not say that people cannot do something so amazing, but that it is our birthright to touch the planet with reverence. Keep that thought of the meeting between people and the environment being one of mutual respect. Go back to the kind of relationship where humans live in nature, not beat it into artificial submission. Let the earth breathe, even in art encountering the ‘unexpected qualities or voids’. Listen.

Jude Cowan Montague is an artist and poet who produces and presents ‘The News Agents’ for Resonance FM.