In 2016 world-renowned curator Azu Nwagbogu invited James Ostrer to show his 2014 Wotsit All About series in Lagos, Nigeria. Naturally, Nwagbogu expected Ostrer to come along with his fetishised junk food portraits that had warned the west of over-consumption.

James Ostrer’s work often tests the limits of the body politics in the ever evolving analysis of the western body, sexuality, and society. In 2009, Ostrer staged “Customer Container”; an installation in which the artist used photographs of himself taken by six different prostitutes under which the only condition was that they order him to perform as they wished. In 2011, his portrait of Nicky Haslam in Lucien Freud’s chair was chosen for the Taylor Wessing exhibition at the National Portrait Gallery. The artist lives and works in London.

Ostrer’s reaction in his own words was, “instant excitement for an ambition I never knew I had. However, this quickly turned into nervousness and suspicion”. He states, “I experienced perfectly and more clearly than ever before how the pervasive impact of racial cultural conditioning towards otherness affects us in terms of human divide through fear.” Even while aboard the plane to West Africa, the flight attendant amplified this sense of worry, warning him of the dangers of Lagos, explaining that the airline staff only travelled under armed guard.

Ostrer confesses to a “diva” moment on arrival, when he realised Mohammed his pre-arranged driver wasn’t at the airport waiting for him. He demanded that “if someone didn’t come and pick me up that I have already met, I will be on the next plane back to the United Kingdom.” 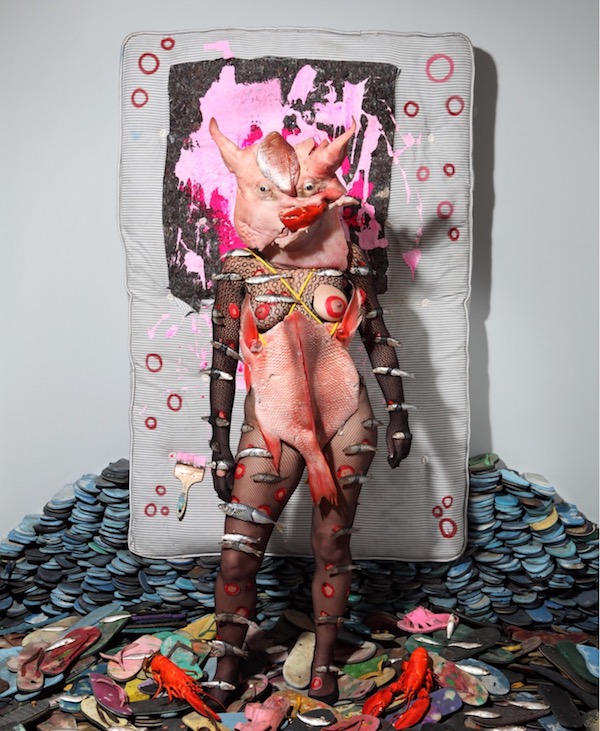 This installation, “Johnny Just Come” is a compendium of provocative art-works, encompassing performance, photography, film, multimedia installations and sculpture, all triggered by his journey for the first time to the continent of Africa.
Within a couple of days having discovered the city of Lagos freely and without fear, Ostrer found himself walking along the vast stretch of sand know as Lighthouse Beach. He found a single child’s Prada flip-flop washed up on the shore, then another, then realised there were hundreds. At a time when the daily news cycle was dominated by stories of desperate migrants washing-up on the beaches of the Mediterranean and North Africa, Ostrer was struck by a deep sense of human loss as he thought about the narrative behind these scattered items. Powered by the notion that the flip flops en masse could serve as a compelling visual metaphor, he quickly employed someone to help him collect them. Within 12 hours this had escalated to a number of people. 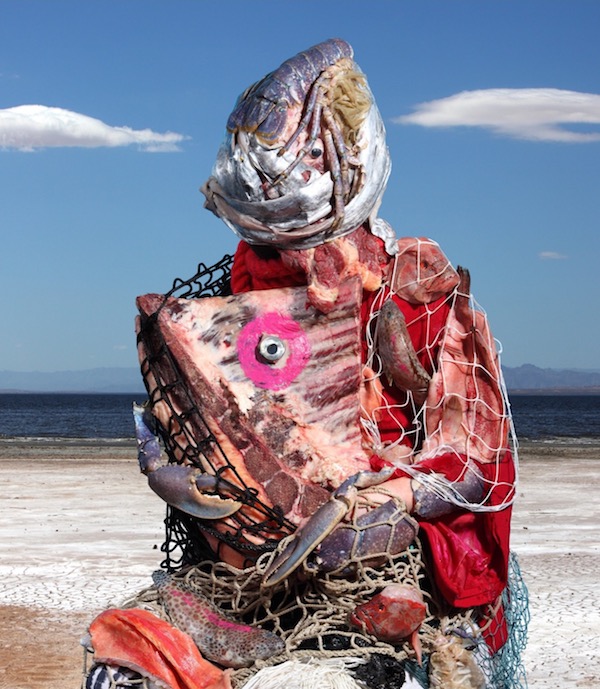 Normally a left-leaning egalitarian activist, in his quest to acquire more flip flops, Ostrer found himself spiralling into an “instantaneous addiction where my moral barometer was overridden by a dominant desire of excess”.
Seeing himself through the wrong end of the telescope, Ostrer found himself purveying an insidious kind of behaviour, where he least expected it. He says, “From a timid ‘Johnny Just Came’, I had turned into a pseudo colonialist chieftain. I used bribes where money didn’t get to those that deserved it, let people work for me in conditions that previously wouldn’t be acceptable to me. In that moment I perfectly epitomised a micro-eco system driven by white privilege and greed.”
Greed and the tribal elite: The greed-laden pursuit of the ultra-extreme wealthy is one that perpetuates a gross insensitivity to the feelings and actual needs of others. Ostrer argues that you cannot increase your disproportionate ownership of global resources without becoming extremely emotionally detached.The show, according to Ostrer, isn’t just simply a reflection of his own behaviour but ultimately about the consequence of the emotional dysfunction of the tribal elite.

Even though it is increasingly believed that we are getting a fairer balance of representation within society – and now even a multicultural member of the royal family – Ostrer argues, “The control is being synthesised into an even more perfect subordination of the masses than ever before with digital technology.” Ostrer further explains, “The reality is it’s not just white men retaining the power but it’s actually the even more emotionally disconnected white men of Silicon Valley who are absorbing all the global top-line power.”

Throughout the show Ostrer collages and layers both sculptural and photographic elements together to create disrupted and often disturbing images. Within the vast footwear installation is his most recent photographic series, Currentsee. For the central protagonist he transforms himself into a dominant tribal leader, a powerful chieftain of all other subjects. Meanwhile, women are tied-up and restricted in movement, their natural bodies obscured by consumerist debris. For the first time, Ostrer will also present a trio of sculptures – synthesising the topics of gluttony and excess from his two previous shows, Wotsit All About and Ego Systems – with the current exhibtion.

Ostrer will also preview his unsettling short film “Snuffling for love Truffles”. This moving image work takes the form of self-portrait where Ostrer acts out the role of Piggy, the absolute visual extremity of his own self-loathing and over-consumption. Filmed as a metaphor for self-annihilation, the film shows the piggy endlessly wanting more – and whether it’s about more pizza, chocolate, Rolex watches or wealth – Ostrer is certain that it leads to a cul-de-sac of emotional detachment and a lack of care for others. He says, “Control of assets now is through data and the corporations are trying to make us more like the piggy in the video. Because if we’re controlled and addicted to what the elite are selling us, we won’t challenge them and the pathways of their power will be greater protected.”