Jimmy DeSana and Laurie Simmons shared a studio in New York up until DeSana’s death from AIDS-related illness in 1990. Simmons cites DeSana as one of her greatest influences and this show examines how that influence continues in Simmons’ later work, specifically in the use of fashion.

Both artists were part of a marginalised community

DeSana was part of the New York East Village scene of the late 1970s and photographed many of the characters around at the time in order to fund his practice as an artist. The moment was marked by the use of fashion as a subversive statement and inspired the aesthetic of DeSana’s Submission series of photographs from 1979, also published in a book with a text by William Burroughs. The performative dressing up continued in the studio where Simmons and DeSana often used each other as models, using whatever costumes and props were at hand. Both artists were part of a marginalised community – Simmons was a woman in a predominantly male New York art world and DeSana a member of the queer community during the AIDS pandemic. 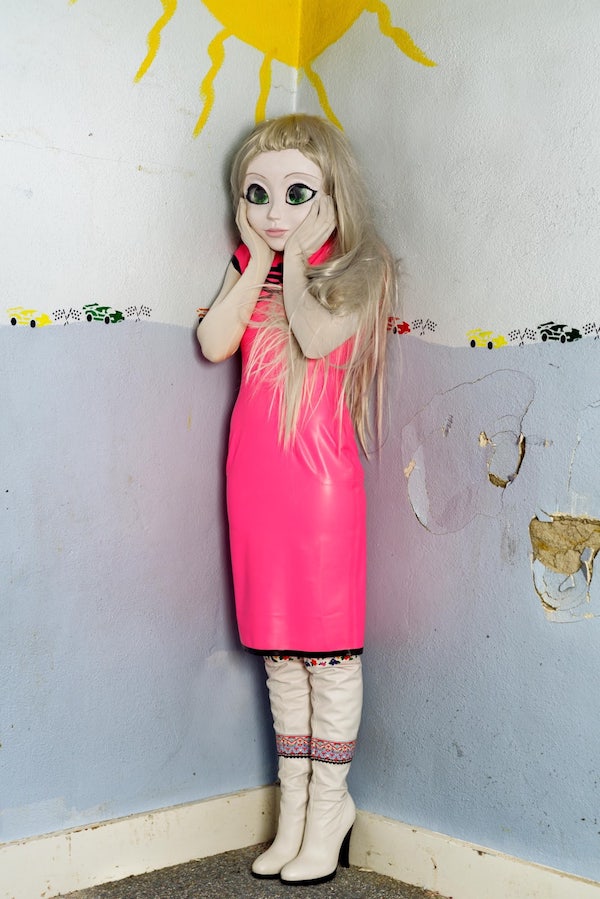 DeSana used fashion as a way to reveal rather than conceal the body, in defiance of the homophobia of the time. In his darkly humorous images, a parka exposes a male torso, a shoe is used as phallic armour or displayed as cross-gendered footwear on a man whose naked body from the waist down becomes the focus of the image. These works precede Simmons ‘Walking Objects’ from the mid-1980s, in which feminine legs are pictured as a mobile support for objects such as a large male glove. The notion of dressing up became a significant part of Simmons ‘Love Doll’ series – taking the idea of the body as object to an extreme. Most notably, she dressed the ‘Love Doll’ as a geisha representing sexual objectification and exchange. The ‘Love Doll’ is also presented with a large collection of shoes scattered over the floor – mocking the notion of a shoe fetish, and alluding to a consumer society’s construction of the young girl.

Simmons’ more recent series ‘Kigurumi’ sees the figures backed up against a wall or confined by an oppressively low ceiling in a decayed domestic setting, again recalling DeSana’s ‘Submission’ series where a woman is curled up in a fridge wearing only leather straps, or a body bound with bandages. Both artists’ depictions of fetishism – DeSana’s black and white S&M photos and Simmons’ images of models wearing Kigurumi suits – are entirely staged. DeSana went on to make images of figures shown in notional living spaces of middle America, again using the clothes and objects to subvert the norm: a mink stole covering the face of a naked woman, or a woman tied to a sofa wearing only a pair of socks. The ‘domestic’ as a stage is a device Simmons has used in several bodies of work from the ‘Early Color Interiors’ to the later works. The photographs of DeSana and Simmons present unsettling tableaux from the fringes of subcultures, be it the latex body suits of the Kigurumi or the punk bondage leather gear of the late 70s – and the images are destabilized further by the suggestion of a suburban backdrop.

Laurie Simmons (b. 1949), is a central figure of the Pictures Generation. She has been the subject of numerous solo exhibitions, including Laurie Simmons: Big Camera/Little Camera at the Modern Art Museum of Fort Worth (TX) in 2018, which travelled to the Museum of Contemporary Art, Chicago (IL) in 2019; Laurie Simmons: How We See at the Jewish Museum, New York (NY) in 2015; and The Fabulous World of Laurie Simmons at the Neues Museum, Nuremberg (DE) in 2014. In 2019, Simmons’ work was included in the Museum of Modern Art’s historic reopening in New York (NY). Current exhibitions include Connecting Currents: Contemporary Art at the Museum of Fine Arts, Houston (TX) through Spring 2022 and Rinus Van de Velde: Inner Travels, Bozar, Brussels (opens 17 February 2022).

Jimmy DeSana (1949-1990) was a photographer who was at the heart of New York’s East Village scene in the early 1970s. A retrospective exhibition of his work will be presented at the Brooklyn Museum, New York, Fall 2022. Recent solo and group exhibitions include Ray Johnson: WHAT A DUMP at David Zwirner, New York (NY) in 2021; All of Them Witches at Jeffrey Deitch, Los Angeles (CA) in 2020; The Sodomite Invasion: Experimentation, Politics and Sexuality in the work of Jimmy DeSana and Marlon T. Riggs at Griffin Art Projects, Vancouver (CA) in 2020; Art after Stonewall, 1969 – 1989 at the Leslie-Lohman Museum of Art, New York (NY) in 2019; Jimmy DeSana at xavierlaboulbenne, Berlin (DE) in 2016; Performing for the Camera at the Tate Modern, London (UK) in 2016; and Remainders at Pioneer Works, Brooklyn (NY) in 2016.