The British artist John Minton (1917 – 1957), is explored in a major new exhibition at Pallant House marking the centenary of his birth and 60 years since his death. It explores the artist’s achievements far beyond his reputation as a leading painter, illustrator and influential teacher.

The 50-year anniversary of the decriminalisation of male homosexuality in England and Wales in 2017 brings added poignancy to the exhibition.

Minton was a Bohemian figure in London during the 1940s and 50s who counted artists such as Lucian Freud and Keith Vaughan in his circle, and a following of Camberwell School of Art and Royal College of Art students known as ‘Johnny’s Circus’. Often the life and soul of a party but also plagued by self-doubt, his work reflected his complex character.

The exhibition will also include evocative wartime landscapes, including views of London, rooting him firmly in the Neo-Romantic tradition, Exotic subject matter in a new colour palette inspired by travel to Corsica, Jamaica, and Spain, including the newly rediscovered ‘Jamaican Village’ (1951).

The exhibition opens with Minton’s evocative wartime landscapes, including moving depictions of post-war London, which gained him the moniker ‘urban romantic’. Placing him firmly within the context of Neo-Romanticism in Britain, it explores the influence of the 19th century visionary Samuel Palmer as well as that of his contemporaries including the Polish émigré Jankel Adler, and also Keith Vaughan, Michael Ayrton, Robert Colquhoun and Robert MacBryde, all of whom he shared a home with during the 1950s. 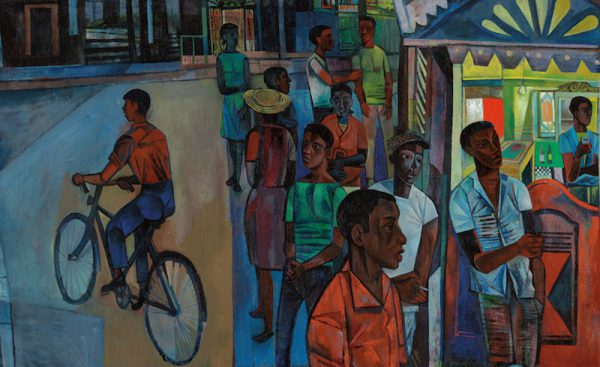 Extensive travels to Europe and the Caribbean in the late 1940s and early 1950s offered Minton exotic subject matter that was an antidote to the reality of post-war Britain. With financial support from the publisher John Lehmann and a commission to illustrate the travel title ‘Time was Away’, Minton travelled to Corsica with the poet Alan Ross. It was for Lehmann that Minton produced illustrations for Elizabeth David’s much-revered cookbook ‘A Book of Mediterranean Food’ in 1950. The exhibition brings together original designs for these and other publications, including Treasure Island, and The Leader magazine, showing how Minton’s commercial work was central to his fine art practice.

In 1951, a three-month trip to Jamaica inspired a new colour palette of sharp, acid colours and presented the artist with a backdrop of political and racial tension that mirrored his own search for equilibrium. This disquiet is evident in the recently rediscovered ‘Jamaican Village’ (1951) – this huge mural painting, first exhibited at the Royal Academy in 1951 and gifted to fellow Royal College of Art tutor Pf. John Morris Wood resurfaced for the first time in 65 years at a Christie’s sale in 2016. Thought to have been intended for the walls of legendary London clubs The Gargoyle or the Colony Room, this is the painting’s first showing in a public institution since 1951.

The second half of the exhibition focusses on Minton’s figurative paintings which demonstrate a remarkable skill in draftsmanship. In many, the artist’s roots in the illustration are visible in the use of black paint and outlining. Minton’s sensitive and often psychologically intense portraits of young men, some of them his students, as in David Tindle, and some his lovers, as in Raymond Ray, can be analysed in relation to the artists’ own tortured homosexuality.

In the late 1950s, Minton increasingly felt out of step with the rising interest in abstract art. The exhibition culminates with a group of paintings depicting historic and current events – the death of Nelson and that of the musician James Dean – in his attempt to find a modern form of history painting, a genre which had become deeply unfashionable. It was perhaps this feeling of being left behind that contributed to his suicide in 1957, aged just 40.

The exhibition is curated by Simon Martin, Director of Pallant House Gallery, and Frances Spalding, art historian and biographer of Minton. An illustrated book by the curators, adding significantly to the critical discourse on John Minton, accompanies the exhibition and is available in the Pallant Bookshop.