A new exhibition of British artist John Stezaker; presenting collages and found images concerned with themes of love, desire and betrayal that have been central to his practice over four decades has been announced for The Approach 15th February – 25th March.

Moments of tension, secrecy or deception creep into the romantic narratives

Love will include, for the first time at The Approach, a selection of early Photoroman collages dating from the 1970s. Made from romantic picture stories printed in magazines of the time, these significant works show the early emergence of concerns with human relationships within the staged cinematic settings of the Photoroman. Through repetition, fragmentation and superimposition, Stezaker disrupts the existing narratives by inventing disjointed, dreamlike scenarios; a preoccupation that has continued throughout his work up to the most recent collages in this exhibition. The recurring motif of a couple and a third person in the background—entering through a door, or as a lingering shadow—suggests moments of tension, secrecy or deception creeping into the romantic narratives. 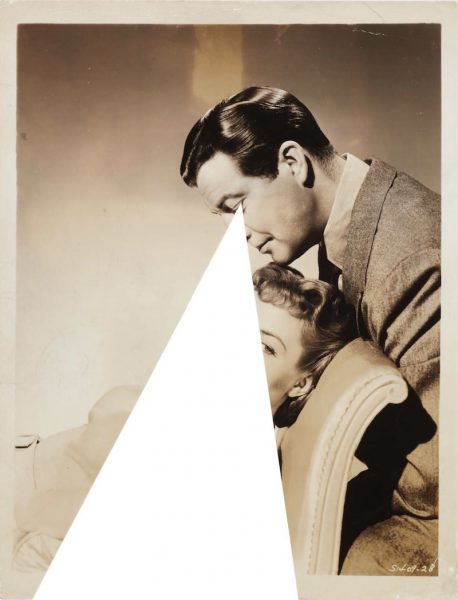 Included alongside the Photoroman are more recent collages using a format Stezaker has employed since the 1980s. In these later works, Stezaker takes old postcards of landscapes and inserts them within found black and white film stills, creating more ambiguous imaginary narratives rather than the raw encounter of the earlier Photoroman collages. The landscapes become suggestive of the psyches of the embracing lovers that are partly obscured beneath the postcards. Images of dark caves, flowing streams, or the abyss between two cliffs, allude to underworlds and the unconscious and suggesting a complex ‘emotional landscape’ underlying the stereotypical image.

While the early work often highlights communication (via speech bubbles, the telephone and facial expressions), the more recent work often focuses the viewer’s attention on touch through the embrace and reaching hands. The figure of the voyeur recurs across different series and the power of the gaze is highlighted in some collages through cone-shaped cut-outs that emerge from the eye of one looking at and often annihilating another.

Love includes a single work from the Unassisted Readymade series, an ongoing collection of found photographs that the artist has not altered, but rather presents in their original state and often bearing the traces of their history of damage, deterioration and the violations of their use.

The exhibition continues over both spaces at The Approach, whilst the main gallery exhibits the Photoroman, Film Still, Pair and Unassisted Readymade series; works from the Love series are shown in The Annexe. In the Love works, Stezaker deploys his recurring use of unknown actors from a bygone era’s publicity shots; the minimal intervention on these collages multiplies the subjects’ eyes to suggest both a sense of unfocused, illogical and uncontrollable love and of something disturbing and uncanny. This is an ambiguity that runs through all the work in “Love”. Though the images are derived from romantic sources, they seem to expose a hidden underlying violence and dread.