Tate Modern has unveiled a monumental 13-metre-high fountain created by the American artist Kara Walker. Walker is best known for her thought-provoking investigations of race, sexuality and violence through the history of slavery, Walker has now created one of the most ambitious Hyundai Commissions to date.

The sculptural figures covering the monument are derived from an array of art-historical, literary and cultural sources

Fons Americanus presents an origin story of the African diaspora and poses timely questions about what is remembered and what is forgotten in public monuments. It is the fifth annual Hyundai Commission, a series of site-specific works created for the Turbine Hall by renowned international artists, as part of the partnership between Tate and Hyundai Motor. 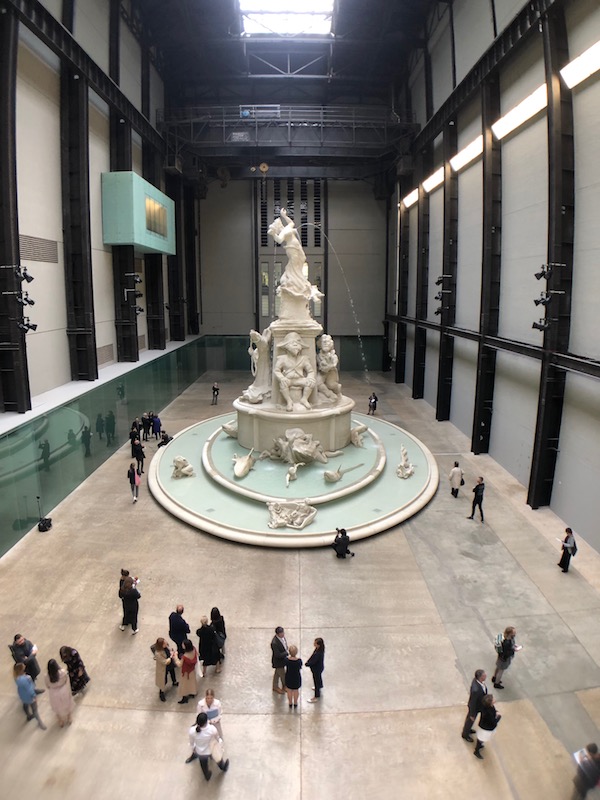 Standing at the far end of the Turbine Hall, Fons Americanus is a soaring fountain that rises from two oval basins filled with water. Sculptural figures occupy these basins and all four sides of the multi-tiered central pedestal, with water spouting from the top figure. Its form is inspired by the Victoria Memorial in front of Buckingham Palace, designed in 1901 and unveiled in 1911 to honour the achievements of Queen Victoria. Rather than a celebration of the British Empire, Walker’s work offers a powerful critique, inverting the usual function of memorials and questioning the narratives of power they present. The fountain is an allegory of the Black Atlantic, exploring the interconnected histories of Africa, America and Europe through fact, fiction and fantasy. Using water as a key theme, the artist references the transatlantic slave trade and the ambitions, fates and tragedies of people from these three continents.

The sculptural figures covering the monument are derived from an array of art-historical, literary and cultural sources. These include J.M.W. Turner’s Slave Ship 1840, Winslow Homer’s Gulf Stream 1899 and Damien Hirst’s formaldehyde shark The Physical Impossibility of Death in the Mind of Someone Living 1991. The 19th-century slave propaganda image The Voyage of the Sable Venus from Angola to the West Indies is a particular source of inspiration, alongside other images of the Roman goddess Venus standing on a seashell. The figure of Venus stands proudly at the top of Walker’s fountain, recast as a priestess from Afro-Brazilian and Caribbean religions. Her scalloped shell becomes a smaller second sculpture located in front of the Turbine Hall bridge, in which the face of a crying boy emerges from a pool of water, filling the shell with his tears.

The full title of the work is painted on the Turbine Hall wall, written in Walker’s own words. Encouraging visitors to confront a history often overlooked in Britain, she presents the artwork as a ‘gift … to the heart of an Empire that redirected the fates of the world’. She has signed the work ‘Kara Walker, NTY’, or ‘Not Titled Yet’, is a play on British honours awards such as ‘OBE’ (Order of the British Empire).

Kara Walker was born in Stockton, California in 1969 anabnd raised in Atlanta, Georgia. Her work is represented in significant museum collections across the USA and Europe and she has received numerous awards, including the MacArthur Foundation Achievement Award and the Eileen Harris Norton Fellowship. She is also a member of the American Academy of Arts and Letters, w 2018 and as of this year, elected an A significant survey exhibition of her work opened at the Walker Art Center in Minneapolis in 2007 and travelled to Musée d’Art moderne de la Ville de Paris, The Whitney Museum of American Art in New York, The Hammer Museum in Los Angeles and the Museum of Modern Art in Fort Worth. Other solo shows of her work have been held at the San Francisco Museum of Modern Art, the Art Institute of Chicago, Camden Arts Centre in London and Metropolitan Arts Center (MAC) in Belfast. 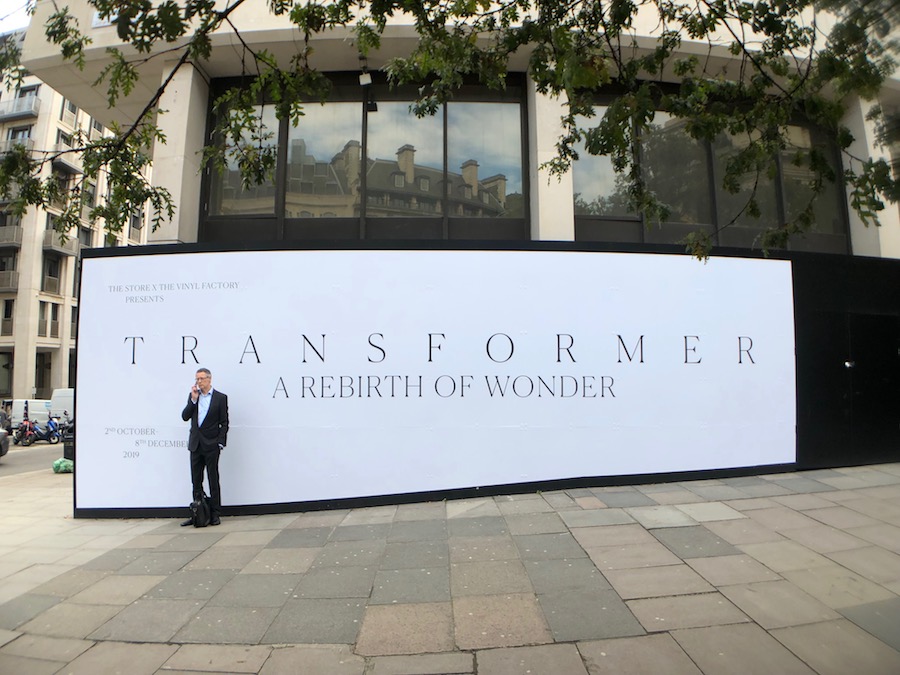 Transformer A Rebirth of Wonder – StoreX

The title of the show is borrowed from American ‘beat’ poet Lawrence Ferlinghetti’s “I Am Waiting” – his celebrated commentary on the problems in American society and the need for a better life, the rebirth of a new wonder. The mood of the poem is a call for a change of consciousness.

Jefferson Hack said: “The artists in Transformer look deeply into the present and see the future. Each artist is a powerful mediator of their community and culture, using storytelling, poetics, and ritual to author new narratives and expand our field of vision. They are world-makers, inviting us to access altered states of consciousness as we step beyond reality into a series of highly authored, staged environments.”

Transformer welcomes the diversity of voices that come with an exploration of identity, representation and self-image and considers how coming together, sharing, bonding, taking action, building alliances and showing compassion is shaping the future to connect and affect change.

The exhibition features the live programme Alchemical Realms, a series of performances, talks, workshops and community-based actions by collectives and artists invited by Transformer associate curator Susanna Davies-Crook. The live programme will include Nottingham based Chaos Magic, a new collaborative inquiry by Leah Clements and Sophie Hoyle, and a performance by Danielle Brathwaite-Shirley. Presented by The Store X, the programme is intended to support and inspire further discussion, participation and development of the ideas inherent in the exhibition. 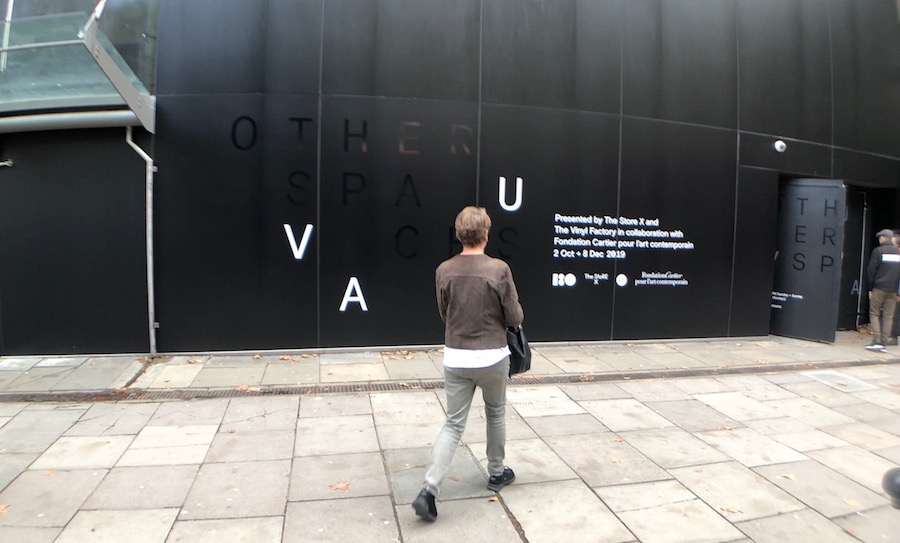 As well as The Store X The Vinyl Factory at 180 The Strand in collaboration with the Fondation Cartier pour l’art contemporain, Paris, presents OTHER SPACES, a major immersive exhibition by London-based practice United Visual Artists (UVA)

PRADA TO OPEN PRADA MODE LONDON DURING FRIEZE AN INSTALLATION BY THEASTER GATES AT 180 THE STRAND
FEATURING COLLECTIVE INTIMACY A LIVE PROGRAMME IN COLLABORATION WITH THE VINYL FACTORY AND THE SHOWROOM, LONDON

Prada presents the third iteration of Prada Mode, a traveling social club with a focus on contemporary culture that provides members a unique art experience along with music, dining, and conversations. The club is organized to augment and extend signi cant cultural events in various cities worldwide. The inaugural iteration coincided with Art Basel: Miami Beach in December of 2018 followed by a second at Art Basel: Hong Kong in March 2019.

Prada Mode London occupies 180 The Strand, the iconic Brutalist building in the heart of the city, on October 2nd and 3rd, with a dynamic programme of exhibitions and events. Here, American artist Theaster Gates presents a new chapter of Black Image Corporation, a project that explores the visual and cultural representation of contemporary Black identity and material culture, from the legacy of Ebony and Jet magazines in the Johnson Publishing Company’s iconic archives, old record stores from the artist’s hometown in the South Side of Chicago, and the powerful creative energy currently pulsing through London.
Theaster Gates’s reactivated spaces in Chicago and his collaborative projects worldwide provide platforms for these archival collections and participating communities to connect and grow. This installation aims to create a new space for people to gather to listen, converse, and contemplate amongst a fusion of art, architecture, music, and everyday life, exploring the methodologies of urban renewal and community activation which underpins Gates’s artistic practice.

The Store X The Vinyl Factory at 180 The Strand in collaboration with the Fondation Cartier pour l’art contemporain, Paris, presents OTHER SPACES, a major immersive exhibition by London-based practice United Visual Artists (UVA), from 2 October to 8 December 2019.

PRADA TO OPEN PRADA MODE LONDON DURING FRIEZE
2–3 OCTOBER, 2019 AN INSTALLATION BY THEASTER GATES
AT 180 THE STRAND FEATURING COLLECTIVE INTIMACY
A LIVE PROGRAMME IN COLLABORATION WITH THE VINYL FACTORY AND THE SHOWROOM, LONDON