With almost 30 public art commissions to his name, Kenny Hunter is used to collaboration. This impressive list – which included several symbolic but approachable animals: lamb, goat, calf, elephant – now includes a challenging war memorial, in Southwark, London. For as Hunter emphasises, these days one has to question, “What are memorials for in the 21st century?”

“I want to address post-1945 conflicts & acknowledge the domestic aspect, the trauma of war on families and communities”

Hunter’s answer has been to look at the impact of war and conflict within a domestic context and to stress empathy over heroism or reverence. No guns, uniforms, or helmets here. Just an ordinary youth, young, vulnerable, alone, standing on a huge fallen tree trunk. He could be anyone’s son. In this war-torn world, he will be anyone and everyone’s son. “I want to address post-1945 conflicts & acknowledge the domestic aspect, the trauma of war on families and communities – something that seems to apply more & more in contemporary warfare,” he explains. 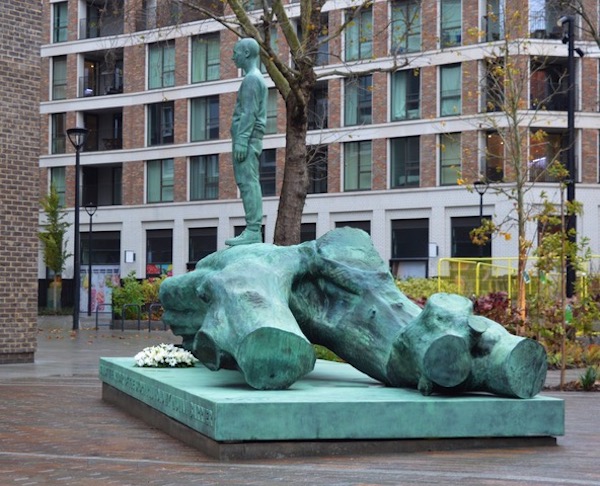 Hunter’s work always aims for modernity, for the contemporary. It is traditional without being conventional. His figures are of today in stance, attitude & dress, clearly, simply defined. He avoids the sentimental, tries for the universal.

This monument can be read many ways. Was this boy’s own father killed in battle? Is he an orphan, a refugee? Does it represent the boy’s own truncated family tree? Is he remembering his childhood before the war when he played in trees? Is his playground now a bomb-site, trees blown up? International wars today devastate villages, towns & cities. Dwarfed, yet stoic; anonymous yet personal, the boy is essential a melancholic but not tragic figure. His youth suggests he will bounce back. The inscription “Against the armour of the storm I’ll hold my human barrier,” also offers hope.

While the figure is originally modelled in clay, the bronze base is cast from an actual massive tree. “Essentially this monument speaks not only of endurance but of the imbalance in scale between the individual life lived and the destructive transitions of history,” Hunter explains. And the fact that the tree is lowdown, horizontal, as opposed to most vertical monuments or public sculpture, encourages touch and connection.

This area of Elephant and Castle was heavily bombed during World War 2 being the target zone for German air-raids, but is now very multi-cultural & full of ethnic diversity, so the figure’s anonymous aspect plays well. Yet Hunter’s youth still has that reassuring monumental quality we all expect from civic statuary, but without its antiquated period aspect. A hundred years on from WW1 a sense of reconciliation is in sight.
Hunter trained at Glasgow School of art & teaches at Edinburgh Art College.