Kiki Smith creates an embodied art. She chose the human body as her subject because it is the one form that we all share; something with which each one of us has our own authentic experience. Her choice was informed by undertaking training to become an Emergency Medical Technician and also by the Catholicism of her upbringing.

She has described Catholicism as being ‘a body-fetishised religion’; one that is always ‘taking inanimate things and giving meaning to them.’ She thinks that Catholicism and art have always gone well together ‘because both belief in the physical manifestation of the spiritual world’ and ‘that it’s through the physical world that you have spiritual life.’ In Catholicism, you have lots of interaction with objects such as rosaries and medals. ‘It’s a thing culture’ and Smith describes herself as a ‘thing-maker.’ 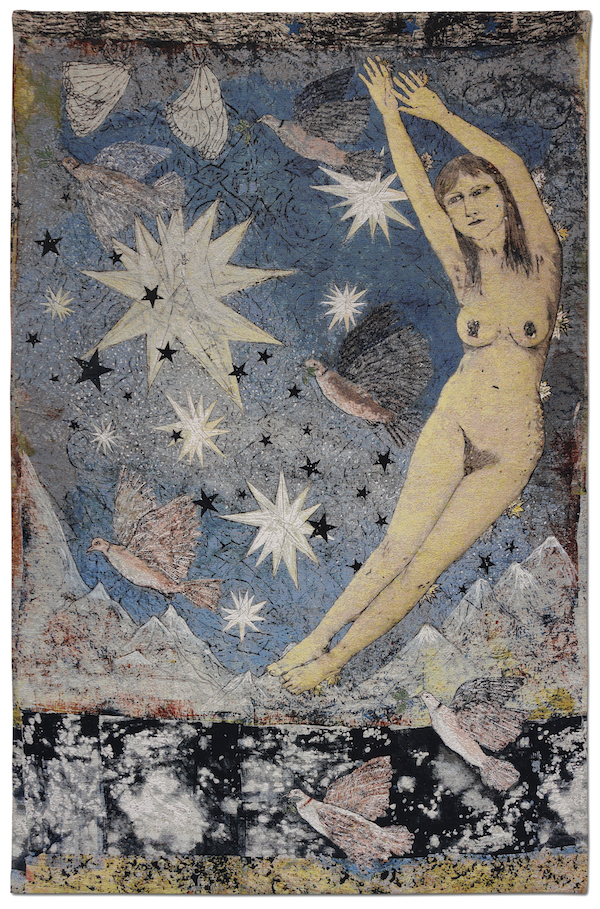 The things she has made here include 12 large tapestries produced between 2012 and 2016 and made using an electronic Jacquard loom, a selection of small-scale sculptures dating from 1985–2015, many of which are shown as a Wünderkammer or’ cabinet of curiosities ‘, photographs that capture her larger sculptural installations, and a room of prints chosen from over 30 years of the artist’s innovative printmaking practice.

Smith made her name initially with works dedicated to fragmented body parts and isolated bodily fluids. She later returned to a focus on the human figure in its entirety with life-size sculptures made of beeswax, including a Mary Magdalene featured in a photograph included here. Some of her early works are represented here by small sculptures included in the cabinet of curiosities, while some of the full-scale wax sculptures from the 1990s are captured by photographs taken in her studio.

Looking in retrospect, she says she sees a path of subject matter in her work moving from microscopic organs to systems to bodies to the religious body to cosmologies. There is now a real breadth to her frames of reference, which encompass fantasy, realism, history, legends, magic, myth and religion. These moves in terms of content were also accompanied by changes in media, as the first works based on the facets of the body were sculptural and conceptual before she then became more overt about languages of craft and decorative arts.

In the 12 large tapestries displayed here, Smith conjures up a visual universe populated by female figures, in particular, animals of all kinds (a menagerie of wolves, cats, fawns, owls and spiders), plants and heavenly bodies in a variety of forms. These are all woven together in a vibrant, ethereal harmony because, as Smith says, we ‘are interdependent with the natural world … our identity is completely attached to our relationship with our habitat and animals.’ In these works, Smith seems to suggest that, for human beings, our awareness of interdependence comes when we are in the open and vulnerable state occasioned by our natural bodily nakedness. By implication, when clothed and protected, we are more able to practice separation from and exploitation of the natural world.

Suzi Gablik’s The Reenchantment of Art announced her disenchantment with ‘a technical and materialist world view’ expressed through a ‘compulsive and oppressive consumeristic framework’ which seems to militate against ‘any sense of having a soul.’ Gablik, therefore, argued that a ‘re-connection to the primordial and to ritual’ might allow ‘for a return of soul.’ Smith’s work would seem to exemplify this argument. She does so by wandering through time and space – with the wanderlust of a cultural anthropologist roaming through lands and historical epochs, collecting and preserving the heritage of our collective memory-making ‘contact’ on a decades-long imaginary journey that takes her through foreign cultures. ‘I am a wanderer,’ she says; thereby providing a title for this exhibition.

Her work is generatively rich in possibilities and creates visions of beauty, reconciliation and hope in a dystopian world. As she has said it’s about: transcendence and transmigration; creating shrines that represent our insides; paying attention to what’s discarded or disregarded; a visual and material solidarity with marginalised beings and the natural environment; art and beauty to remind us that it is mutual respect between humanity and nature that will secure the survival of both, and the planet as a whole.