Lee Bul (b. 1964, Seoul, South Korea) explores questions of intimacy, gender, technology and class – as well as the tension between despair and hope, horror and beauty – through works that range from provocative guerrilla performances to large-scale installations that attempt to get our body and our brain working ‘at the same time, together’.

“My works are a kind of journey to another place, another time.”- Lee Bul

Taking over the entire Hayward Gallery, Lee Bul: Crashing brings together more than 100 works from the late 1980s to the present day, including a new sculptural work and a site-specific commission, in order to explore the full range of her pioneering, thought-provoking and highly inventive practice.

Shaped by her experience of growing up in South Korea during a period of political upheaval, much of Lee Bul’s work is concerned with trauma, and the way that idealism or the pursuit of perfection – bodily, political or aesthetic – might lead to a failure or disaster. Questioning women’s place in society, particularly Korean society, she also addresses the ways in which popular culture – in both the East and West – informs and shapes our idea of ‘feminine’ beauty. 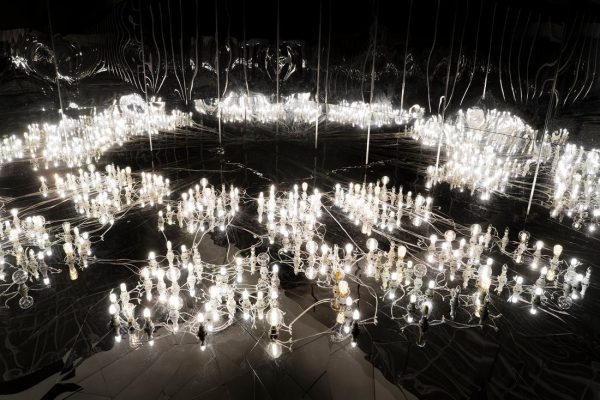 Lee Bul’s complex revisiting of utopian modernism pairs perfectly with the democratic aspirations of the Hayward’s own adventurous architecture.

Setting out to ‘mix things together, conceptually, and also materially’, Lee Bul draws on diverse sources that include science fiction, 20th century history, philosophy and personal experience, whilst making use of deliberately ‘clashing’ materials that range from the organic to the industrial, from silk and mother of pearl, to fibreglass and silicone.

Since the early 2000s, she has focused on architectural utopianism, bringing together references to both real and imagined architecture in sprawling sculptures of futuristic cityscapes. At the core of her most recent work is an investigation into the landscape, which for the artist includes the intimate landscape of the body, ideal or fictional landscapes, and the physical world that surrounds us.

I want to get across a sense of walking through time, through different periods. My works are a kind of journey to another place, another time. We travel, but the stories are in the landscape, and you can see that it’s always the same place.” – LEE BUL

Through this exhibition, we hope to take visitors on a journey of utopian exploration. Lee Bul’s work addresses both the aspirations of democracy and its potential failure, and I think approaching these topics is more relevant than ever today. – STEPHANIE ROSENTHAL, CURATOR
”
Opening with the artist’s iconic Cyborg, Monster and Anagram series, Lee Bul: Crashing features documentation of her early performances, seminal works such as Majestic Splendor (1991–2018) – an installation consisting of rotting, sequinned fish – and the pivotal Live Forever III (2001), which acts as a bridge between her early figurative works and the later installations.

Lee Bul Installation view of Civitas Solis II, 2014 (002_LeeBul_CivitasSolisII_2014_MMCA) Also on display, some for the first time, are the artist’s paintings and wall pieces, along with drawings and architectural models that illuminate the way that her three-dimensional works are developed. The exhibition culminates with Willing To Be Vulnerable – Metalized Balloon (2015–16), a 17-metre long sculpture resembling a Hindenburg Zeppelin, suspended above a mirrored floor in Hayward’s light-filled upper galleries. This colossal sculpture – which references the 1937 Hindenburg disaster – is at once aspirational and optimistic and concerned with technological failure, fragmentation and destruction. It is accompanied by the artist’s new intricate sculptural work Scale of Tongue (2017–18), which makes a subtle reference to the Sewol Ferry Disaster of 2014.

For this exhibition, which coincides with Hayward Gallery’s 50th anniversary in July, Lee Bul treats the gallery’s architecture, not as a backdrop but a collaborator. An ambitious, site-specific commission, Weep into stones (2017–18) responds to both the fabric of the Hayward and its radical design by draping the building in a shimmering curtain of fine steel wire, crystal and glass.

We are particularly delighted to present this pioneering artist during Hayward’s 50th anniversary year. Lee Bul’s complex revisiting of utopian modernism pairs perfectly with the democratic aspirations of the Hayward’s own adventurous architecture.