A new exhibition of the work of Albert Oehlen (b. 1954, Krefeld, Germany) has been announced for the Serpentine. Oehlen is one of the most innovative and significant artists working today. He has been a key figure in contemporary art since the 1980s and the diversity of his painting is a testament to the intrinsic freedom that remains at the heart of the medium. Through expressionist brushwork, surrealist gestures and deliberate amateurism, he engages with the history of painting, pushing its essential components to bold new extremes.

I am not interested in the idea of staging my work in a space specifically conceived for it. I think that art should adapt to the architecture or fight with it – Albert Oehlen

Oehlen studied at the Hochschule für bildende Künste Hamburg in Germany from 1978 to 1981 and quickly rose to prominence, working with artists such as Martin Kippenberger, Georg Herold and Werner Büttner, who sought to create works that defied categorisation and contradicted the existing artistic status quo. Straddling various debates surrounding the nature of painting, Oehlen’s work deconstructs the medium to its essential elements: colour, gesture, motion, and time. 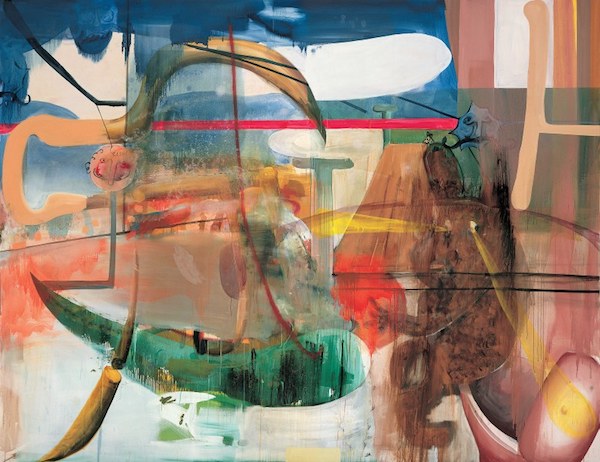 This line of investigation, which Oehlen has continued to pursue in the decades since, has resulted in striking variations between works that combine abstract and figurative styles using a range of techniques, from oil painting to spray paint, digital printing and collage.

At the centre of the Serpentine Gallery will be an installation that marks the beginning of Oehlen’s process of interpreting the Rothko Chapel in Houston, Texas. Four new paintings – the same scale and size as the four horizontal canvases found in the Chapel – have been made specifically for this exhibition. Alongside this central installation will be a selection of paintings from the last two decades. A newly-configured soundtrack by the Swiss ensemble, Steamboat Switzerland, will play at intervals throughout the duration of the exhibition. The presence of music will extend through two live concerts taking place during the exhibition’s opening week, with performances by Steamboat Switzerland and experimental musician, Lorenzo Senni. Details of these performances will be announced via the Serpentine Galleries’ website.

The exhibition will be accompanied by a fully illustrated catalogue with texts by Dawn Adès and André Butzer, and a new interview with Serpentine Artistic Director, Hans Ulrich Obrist.