Varvara Roza Galleries (London) and The Blender Gallery (Athens) are presenting a solo exhibition of Manolis Anastasakos, one of the leading Greek artists of his generation. This solo exhibition will run from 1st to 21st October.

The truth, however, can be found in the inner distance – Manolis Anastasakos

Anastasakos approaches worldly myths with consistency and artistic structure. He essentially presents the archetypal forces of imagery at a level of abstraction, as well as the spiritual liberation at a level of pluralism. They are myths found in the depths of existence, glorifying all sorts of multi-layered inner heterotopias. The exhibition presents 15 pieces from Anastasakos’s ‘Mythos’ series that will be on display for the first time in the UK. 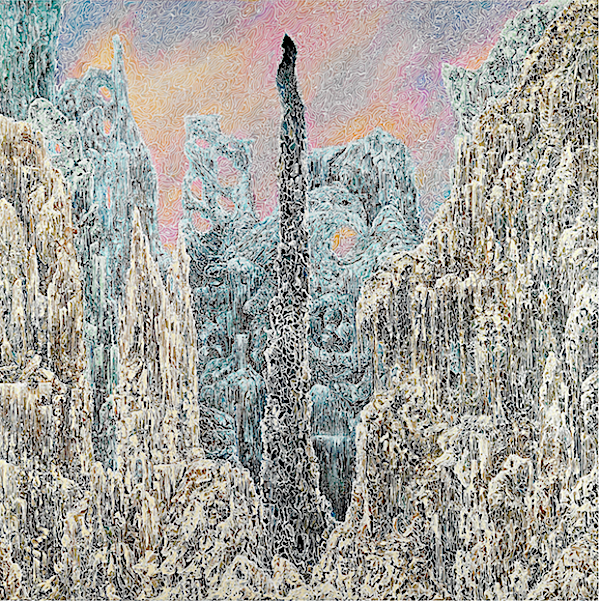 The ‘Mythos’ series reflects our world and our inner selves, seen through the prism of mankind’s epic tales, since the beginning of time and across the globe. Selected myths from the Near East, Egypt, China and of course Greece. Nastasakos has Christian iconography is also part of this work. Each myth is depicted in detailed design, indulging the viewer in a game of motifs and hidden meanings. He started producing these artworks in 2014 and continues until today.

The artist approaches worldly myths with consistency and artistic structure. He essentially presents the archetypal forces of imagery at a level of abstraction, as well as the spiritual liberation at a level of pluralism. They are myths found in the depths of existence, glorifying all sorts of multi-layered inner heterotopias. The Mythos series is a general reflection of our world, shaped by the stories of mankind throughout time, and at the same time a specific mirror of the self.

As the viewer–receiver analyses the works using sensory and spiritual cues, their details embellish the original image of the world. Man is made of stories and experiences throughout time. In Anastasakos work, we seek those stories in their most ancient form. A fresh, radical, contemporary vocabulary of art is embedded in his work.

His work is a bold approach bringing together what we perceived up until now as the two disparate ends of art. Abstraction and minimalism are combined with baroque elements and pluralism in compositions of mythical depth. Each of these works of art, viewed merely as objects, are handled by the artist with freedom and at the same time with ascetic abstinence, therefore preserving a sense of higher, sacred struggle. The Mythos series allows the viewer to redefine how he interprets a work of art. These works become the incentive to merge archetypal stories with the nowness freshly and artistically. They invite our gaze and our spirit to take a journey in an artistic and almost Mythical sacred place.

The Mythos series is a maze-like straight line-shaped from what we all call effortlessly “life”. It induces the viewer, through the time of the artwork’s viewing, into a new vocabulary of art and worldly myths. Through distance, analysis and critical thinking are undertaken by each viewer, the work reveals its hidden sides and its true nature, which eventually reflect the nature of the viewer himself.
one of Greece’s Most Notable Contemporary Artists.

Varvara Roza Galleries/ Blender Gallery are joining forces to pursue a common goal and passion: To present Greece’s most outstanding contemporary artists to the global art scene as London prepares for Frieze week and auction season kicks off. The series of exhibitions will all take place at 8 Duke Street in the heart of London’s St. James’s, an epi-centre of the London cultural scene with its iconic auction houses Christie’s and Sotheby’s, Mayfair galleries and the Royal Academy of Arts all within a stone’s throw of each other.