Mixed-media installation Under Skin by United States-based Nigerian artist Marcia Kure opens on 12 December at the Royal Institute of Art in Stockholm, presenting a new chapter in the artist’s ongoing investigation into identities and power structures across geography and community.

Currently, guest professor at the Royal Institute of Art in Stockholm, the artist opens a dialogue around ‘bio-power’, a term coined by French philosopher Michel Foucault in the 1970s, describing authoritarian rule over individuals and entire populations through optimised productivity. Systems of power achieve social subjugation through raised standards of living, welfare and health conditions as well as technological advances in a problematic trade-off for increased collective control. As such, the concept of bio-power frames the social sphere and human life as governed by mechanisms that adjust the self as well as the collective for the purpose of control.

Can community, in our day, create ideas and practices of power and with them, develop affirmative modes of living and socio-political organisation? 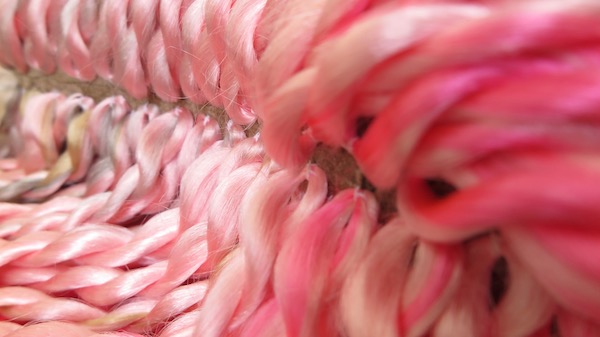 Under Skin takes the premise of bio-power, yet poses the question: In contemplating this question, Kure’s starting point is the bull-shaped boli figure – the form and idea of which are central to the exhibition. Produced by Bamana sculptors from West Africa and owned by secret power associations, these enigmatic objects become potent tools for the manipulation of elemental and cosmic powers. Moreover, the accretion of diverse ritual materials, deposited over time by the owners on its surface or Skin, invariably signified its accumulation of power and energy.

Kure’s boli figures, made from hair extensions, candle wax, plaster and pigments invoke the form of Bamana power figures yet gesture towards elements of high fashion, mass consumption and entertainment. Thus, though the figures seem playful, massed together, they constitute a coalition of diverse energies – pointing towards Hardt and Negri’s concept of multitude, arrayed against the global, post-ideological and post-national empire – as they stand strong together, on the checkered floor of the Royal Institute’s exhibition hall.

In a nod to Alexander McQueen’s 2005 runway show, It’s Only a Game, in which fashion models at first move around freely, showing off the latest from the designer’s haute couture, but eventually are turned into marionette-like pawns on a chessboard lit up on the luminescent floor – until the game reaches a disastrous checkmate – Kure aligns the boli figures in formation, as if ready for a power play with the empire’s immanent forces.

The artist further explores the body as a site of protest in the satellite works that connect to the central stage occupied by the power figures. Here she implicates science as a tool that in the hands of political authorities is deployed to regulate human bodies, control knowledge, and maintain systemic order. What the spectator sees is tie-stained paper, which, when dried and unravelled become bodies whose skins show scars of their physical trauma. These marked bodies bear testimony to technologies of bodily violence upon which old and new political hegemony depend.

Under Skin includes two of Kure’s new collages, based on material from the archives of the Ethnographical Museum in Stockholm. Here the artist reassembles body parts, objects from ethnographic auction catalogues, and images from fashion magazines to create figures in which the politics and histories of empire and colonial subjection, art and beauty, fashion and prejudice collide – thus suspending ready assumptions about meaning, value and valence of contemporary bio-power.

Marcia Kure studied at the University of Nigeria and is also an alumnus of the Skowhegan School of Painting and Sculpture. In addition to exhibitions in Nigeria, Germany, the Netherlands, England and the United States, her work has been exhibited at La Triennale, Paris (2013), International Biennial of Contemporary Art, Seville (2006) and Sharjah International Biennale (2005). Kure is currently a visiting professor at The Royal Institute of Art where she works with the school’s students on the course Pushing Boundaries: New Forms of Sculptures, which seeks to broaden the definition of sculpture.

Royal Institute of Art Stockholm is a leading art institution for higher education and research in Stockholm with a long artistic tradition since the 18th century. It offers both graduate- and postgraduate education in art, and postgraduate education in architecture. The school runs an active international programme with projects, lectures, exhibitions and publications. Rutiga Golvet (The Checkered Floor) was initiated in 2017 by Vice-Chancellor Sara Arrhenius as a meeting space for art theory, publication, exhibitions and seminars, for artists to attend to urgent issues and to develop artistic and educational projects. Rutiga Golvet is a workshop space for thought and discourse where curators, editors, critics and art scholars are invited to interact with the Royal Institute of Art’s educational programmes – capturing, highlighting and deepening artistic and philosophical issues that exist at the school, and putting them in relation to a larger world.