Mat Collishaw grew up in a Christadelphian family – the Christadelphians are a non-Trinitarian, millennial Christian group who describe themselves as ‘a lay community patterned after first century Christianity’ – but gradually became disillusioned with the faith.

These experiences and explorations will come together in a site-specific installation’ Execution of Justice’ that explores the themes of martyrdom and treason, worship and heresy at Ushaw from 5 July until 3 November. 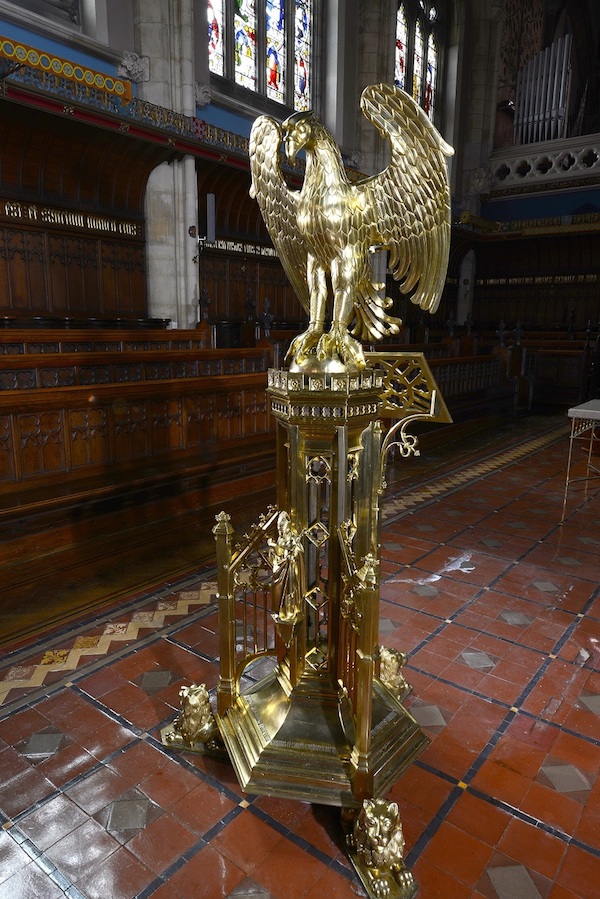 Ushaw is a former Catholic seminary near the village of Ushaw Moor, just a few miles outside Durham city. It was founded in 1808 by scholars from the English College, Douai, who had fled France after the French Revolution. Ushaw College was the principal Roman Catholic seminary for the training of Catholic priests in the north of England until it closed in 2011. Ushaw includes a complex of chapels designed by AWN Pugin and library holdings which are of enormous range and variety. Pugin, the Gothic Revival architect, who is best known for his design of the interior of the Houses of Parliament and the Elizabeth Tower, also designed for Ushaw a lectern topped with a bronze sculpture of an eagle which has been a source of inspiration to Collishaw.

The extensive archive has inspired the new work at Ushaw as well as some of its most valuable treasures. Collishaw was inspired by the grand scale of the college and chapels at Ushaw as well as the extensive archive. He has commented: ‘I was looking at the reliquaries at Ushaw and thinking about the compelling idea of martyrdom; believers giving their life for doctrine and becoming sanctified for their sacrifice. To one side, a devotee would have died a martyr, to the other side they would have been a fanatic who died for the wrong reason.’

This dual view of the one person and one act, which has considerable contemporary relevance, was illustrated by Ushaw’s copy of ‘A True, Sincere and Modest Defence of English Catholics that suffer for their faith both at home and abroad against a false, seditious and slanderous libel’. This book by William Allen, the founder of Douai after Elizabeth I had started executing Catholics, is a passionate defense of his faith but to Richard Topcliffe, who was Elizabeth’s chief persecutor and torturer of Catholics and who signed and annotated Ushaw’s copy of the book, Allen was nothing but a ‘monstrous traitor’. 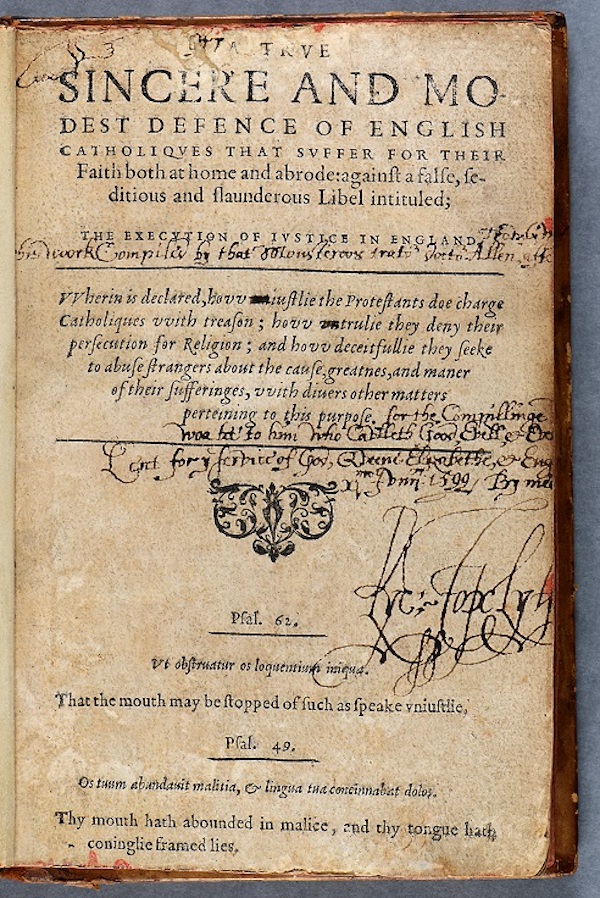 Collishaw notes: ‘I was drawn by ‘The Sincere and Modest Defence of English Catholics’ document in Ushaw’s library, which had been annotated by the Elizabethans’ chief priest-hunter and torturer Richard Topcliffe. In this one document, both perspectives are outlined, diametrically opposing viewpoints sandwiched together. When church and state are bound together, the ramifications of belief are extravagantly magnified, martyrdom and heresy are two sides of the same coin. It was this mirroring of religious conviction that I decided I wanted to work with.’

‘Execution of Justice’ will be installed in the ornate ante-chapel of the Chapel of St Cuthbert. A large animatronic eagle will ‘face-off’ with Pugin’s eagle-topped lectern. In opposition, the eagles will confront each other, Collishaw’s being able to look around and twitch, raise its wings to full span in a bid to intimidate its more stoic opponent, while also teasing and torturing a small mechanical mouse. The eagles tensely represent both victim and aggressor, provoking thoughts of Protestant and Catholic, martyr and heretic, as two opposing viewpoints of Christianity. Pugin’s lectern was displayed at the 1851 Great Exhibition as one of the great wonders of the day, so, is perhaps, more than capable of standing its ground in the ‘face-off’ with Collishaw’s animatronics.

Collishaw has never been one to shy away from provocative subject matters and often creates work that challenges perceptions or gives an alternate view of existing venues and artwork. He has consistently startled viewers by making the vile desirable and the repulsive inviting as he explores moral dilemmas and reveals the darker fantasies within what is initially alluring and compelling. This rare ability will no doubt ensure that ‘Execution of Justice’ will have a real impact at Ushaw challenging viewpoints surrounding Christianity.

It is this exploration and opposition of the themes of martyrdom and treason, worship and heresy that is exciting Lucy Jenkins, Heritage and Curatorial Manager at Ushaw. She says: “This is our third public art installation at Ushaw but the first new commission of a site-specific work created especially for the space. To have an artist of Mat’s calibre involved is hugely exciting for us and if we’re all looking forward to experiencing this new work created in response to our history, collections and architecture. When both eagles take their place in one of our most spiritual settings, it will be an exceptional opportunity to see new work from one of our most engaging British artists, and will offer a chance for visitors to examine their perspective on history and faith, both past and present.”

This work will continue Collishaw’s meditations on the alluring and the revolting, the familiar and the shocking, the poetic and the morbid. The installation will call attention to the beauty of Pugin’s work and the treasures held at Ushaw. Once again, the morality of his upbringing and the challenges of faith – both light and shadow – will seed his work.

A new commission from internationally renowned British artist Mat Collishaw will see the artist create a site-specific installation that explores the themes of martyrdom and treason, worship and heresy at Ushaw, the former seminary in County Durham, from 5 July until 3 November.