A special exhibition to coincide with the 50th anniversary of the Apollo 11 Moon landing in July 1969 curated by Ben Moore at Art Below, will be on view at The Other Art Fair hosted by Saatchi Art.

ONE SMALL STEP is a unique exhibition featuring 12 leading artists – in-line with the 12 men who have walked on the moon since 1969 – who will each transform an astronaut helmet into a work of art. 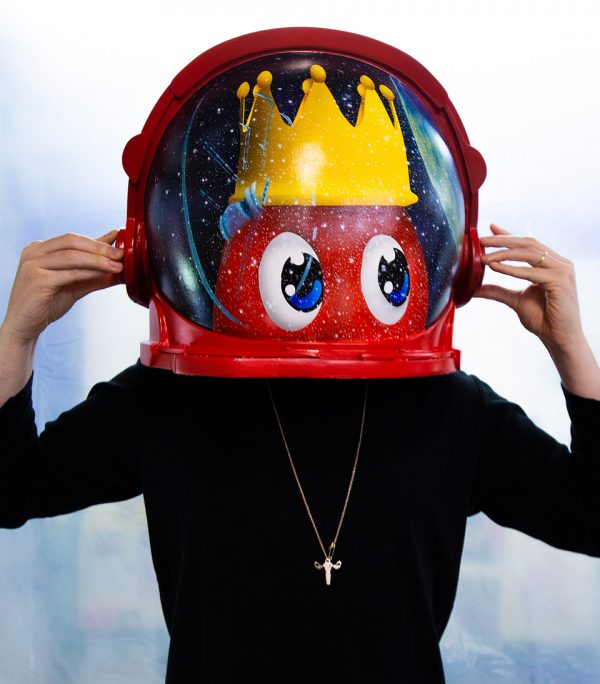 Curated by Ben Moore, all proceeds from the sale of the One Small Step helmets via Paddle8 online auction will go to MAG (Mines Advisory Group) whose mission is to clear landmines and unexploded bombs from conflict-affected communities, where one small step can be the difference between life and death.

Curator Ben Moore comments, “It’s incredible to think that only 50 years ago we first landed on the moon which has been our loyal companion in the night sky since the beginning of time as we know it. I believe that one day soon when we have conquered the limitations of speed the planets will become like new countries in our universe and we will begin a new chapter of space travel and planetary colonisation. Through this all I hope planet Earth will always remain our home – safe and secure thanks to the good work of charities like MAG.’

Jane Cocking, CEO of MAG comments: “Every day, twenty people are still being killed or injured by landmines and unexploded bombs, so we’re thrilled to be able to raise vital funds for our work through this unique and exciting exhibition.”

The exhibition follows curator Ben Moore’s sell-out 2013 exhibition Art Wars where some of the world’s leading artists were given Star Wars stormtrooper helmet replicas to transform.

The ONE SMALL STEP exhibition will be unveiled at the first summer edition of The Other Art Fair, from 4 – 7 July where it will be on public display in The Crossing, King’s Cross, one of London’s largest and most exciting redevelopments, and the capital’s creative neighbourhood. In addition to the original astronaut helmet artworks, there will be limited edition prints available for sale at the fair.

Jessica Chow, UK Fair Manager of The Other Art Fair, adds, “One Small Step creatively pairs a momentous tribute with a special charity and cause, cleverly brought to life by an incredible selection of artists. The helmets will be a highlight of the fair not to miss.”

Posters featuring the astronaut helmets will go on display at nearby London Underground stations supported by Art Below. The auction will open via Paddle8 from 4 July and then countdown to the anniversary of the moon landing and close on 22 July. The original helmets plus selected limited edition prints will be part of the auction, with all proceeds going to MAG.

The Other Art Fair

Acquired by Saatchi Art in 2016, The Other Art Fair continues to grow both in the UK and abroad. 2019 will see a record twelve editions of the fair take place across the world in London, Brooklyn, Chicago, Dallas, Los Angeles, Sydney and Melbourne.

Ben Moore is the founder and curator of Art Below, a London-based contemporary art organisation that uses billboard space to showcase art and has shown the works of more than 3,000 artists in London, Tokyo, Berlin and Los Angeles.

Alongside Art Below, Ben has curated exhibitions at galleries and museums including London’s V&A, the Saatchi Gallery, Somerset House, and The Pacific Design Centre in Los Angeles.

Art Wars, Ben’s 2013 Saatchi Gallery exhibition of Stormtrooper helmets by artists including Damien Hirst, Jake and Dinos Chapman and Alison Jackson was a sell-out success and has toured to Dubai, Sweden, Miami and Los Angeles.

Following the disappearance of his brother Thomas in 2003, Ben has maintained a strong connection with the Missing People charity, who approached Ben to conceptualise and carry out ‘UnMissable’, the 2018 exhibition of portraits of missing people at The Other Art Fair.

Since 1989, MAG has helped over 18 million people in 68 countries rebuild their lives and livelihoods after war.
In 1997, MAG shared the Nobel Peace Prize for its role in banning landmines.

One Small Step During The Other Art Fair 4-7 JULY 2019 The Crossing, King’s Cross, London N1C 4AA