RIBA is presenting a new exhibition of Pablo Bronstein. Titled Conservatism, or The Long Reign of Pseudo Georgian Architecture this is the third in a series of specially commissioned exhibitions with artists.

Fifty new drawings by the British-Argentinian artist Pablo Bronstein, are framed alongside a selection of rarely-seen historical Georgian and Neo-Georgian material from the RIBA Collections; the exhibition focuses on buildings constructed during the second half of the twentieth century in an ostensibly ‘Georgian’ style.

Chosen by the artist, the archival material maps and situates Bronstein’s drawings in the context of architectural practice through time, revealing long-cherished ideals about social aspiration, urban fabric, identity and representation. From the RIBA Collections, renowned architectural figures such as Colin Campbell (1676-1729), Michael Searles (1751-1813) and Robert Adam (b.1948) are presented alongside lesser-known contributors to the neo-Georgian style while architecture practice Apparata (Nicholas Lobo Brennan and Astrid Smitham), adds a contemporary commentary through a new commission for the Foyer space of the RIBA Headquarters. 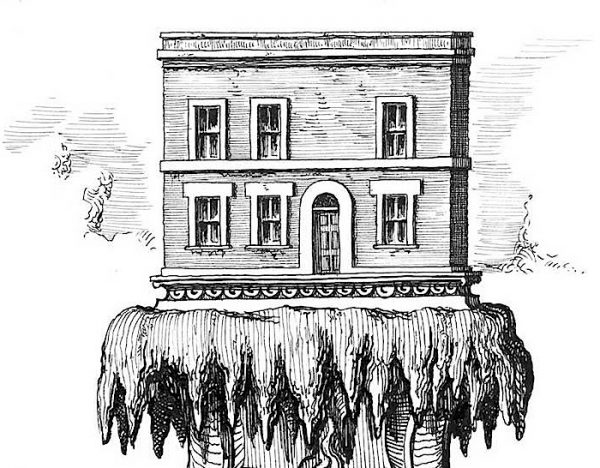 Pablo Bronstein said: “With this exhibition, I am continuing a personal history of drawing recent buildings, focusing on an architecture so unloved, yet so endemic to Britain. It can be characterised as alluding to the Georgian, and has become a staple of every British landscape; it should be addressed as the most current British vernacular style. Its success and its principal interest to me is that of its ability to successfully and economically pander to delusions about our past, and to flatter our vanity of wealth and class. It is an architecture perfectly suited to the last thirty years of our history.”

Marie Bak Mortensen, Head of Exhibitions, RIBA, said: “We are very excited that a series of new drawings by celebrated artist Pablo Bronstein will be presented in the Architecture Gallery at the RIBA. Bronstein’s work raises timely questions about how we both experience and acknowledges an architectural style that pervades the UK, yet remains undocumented within the canon of architecture. Revealing long-cherished ideals about social aspiration, urban fabric, identity and representation, his drawings of neo-Georgian developments will perform a lovingly critical dialogue with the historical objects from RIBA’s own architecture collection.”

The title of the exhibition ­– which plays on the highly extended titles of eighteenth and nineteenth-century social comedies and theatrical productions – contains the term ‘Pseudo-Georgian’, a neologism coined by the artist. The term describes a specific aesthetic commonly seen in recent British construction; a particular skein of developer-led, mass-produced construction which begins after the post-war enthusiasm for Modernist construction fades. The mid-1970s saw a rise in heritage concerns, restoration and preservation as well as a renewed enthusiasm for historic styles in the rebuilding of Britain, and particularly London.

In this context, the term Conservatism refers not to specific political interest, but rather to a tendency towards nostalgia, security and a historically inflected sense of national identity. Originally, architecture in the Georgian era – itself a period of great national confidence – developed a refined interpretation of Neo-Classicism, stripped back and presented as an approved declension of ‘good taste’. Subsequently, the popular style proliferated through architects and builders at all social levels. The various waves of Neo-Georgian architecture were motivated by similar intentions, to restore a sense of authority and historic continuity to Britain’s architectural fabric. The current exhibition examines the most recent wave of this tendency, examining what it means to be building in an ostensibly Georgian aesthetic today.

The exhibition centres around the study made by Pablo Bronstein on recent architecture in London (published in the volume ‘Pseudo Georgian London’, 2017: Koenig Books), which he has been conducting over the past eighteen months. Identifying the characteristics of the buildings within his study, the artist together with members of the RIBA curatorial team and historic collections sought to construct a research project and subsequent narrative around the continuity of the Georgian aesthetic – looking at its origins in the mid-eighteenth century, through to subsequent revivals following the Victorian era and in the interwar period in Britain.

Curated by Shumi Bose, (Curator, RIBA Public Programmes) with support from Suzie Pugh (Curator, RIBA Drawings & Archives Collections) fourteen works are displayed alongside the new drawings series by Bronstein, situating and contextualising the exhibition in a continuity of architectural practice. In order to address the historic proliferation of the ‘Pseudo Georgian’ aesthetic, two eighteenth century pattern books borrowed from the British Architectural Library are also displayed alongside objects from the artist’s own collection – as well as a selection of critical articles culled from archival copies of Building magazine, one of the oldest publications to address the entire culture of Britain’s construction industry.

The exhibition has been designed by Apparata (Nicholas Lobo Brennan & Astrid Smitham), in collaboration with the artist and the curatorial team. It approximates a ‘Pseudo-Georgian’ interior, using off-the-shelf products such as pre-routed panelling and cornices, and Regency-style wallpaper. The mass-produced aesthetic is selected to provide a context which is at once critical and strangely familiar, reflecting popular taste and mass consumption.

The Architecture Gallery is divided into seven domestically scaled rooms, each of which has a specific focus. Following the introductory Ante-Room, which explains the context of the exhibition, the first space frames a selection of buildings at the scale of the City Block – larger than individual residences, yet smaller than a whole street, and often used for multiple and commercial functions. The next space addresses the very common form of the Residential Terrace – juxtaposing historic examples such as Colen Campbell’s design for Grosvenor Square – with Bronstein’s drawings of contemporary developments.

The central space is given over to research, highlighting key historic works borrowed from the RIBA Drawings Collection, as well as a selection of critical articles and advertisements culled from archival issues of Building magazine, dating from 1975–2002. These articles attempt to contexualise the discussion surrounding the emergence of the ‘Pseudo Georgian’ in British construction.

Subsequent rooms cover the typologies of Large Developments, Civic and Commercial buildings and Individual Houses. A particular highlight from the RIBA collections is a preliminary design for the City Police Station at Wood Street, by McMorran & Whitby ­– a highly celebrated example of Neo-Georgian architecture currently under threat from a new development on an adjacent site.

In line with its mission to support emerging architects, the RIBA has commissioned an installation for the foyer of its flagship building at 66 Portland Place, designed by Apparata (Nicholas Lobo Brennan & Astrid Smitham). This installation forms a complement to the major exhibition featuring Pablo Bronstein in the Architecture Gallery. The installation, titled Abacus, Base, Capital, comprises a sculptural totem and augmented by furniture elements, arises from the practice’s belief that classical architecture is deployed as a progressive force, associated with leaps in human knowledge. A twenty-first-century classicism, the architects claim, includes contradiction, tension and motion.

A special RIBA Late event, celebrating the themes and works within the exhibition, will be held on 10 October 2017. A series of public events including artist and architects’ talks, debates, film screenings, and workshops for families and children will support this programme